CDC: US-bound air travelers can use some self-administered tests 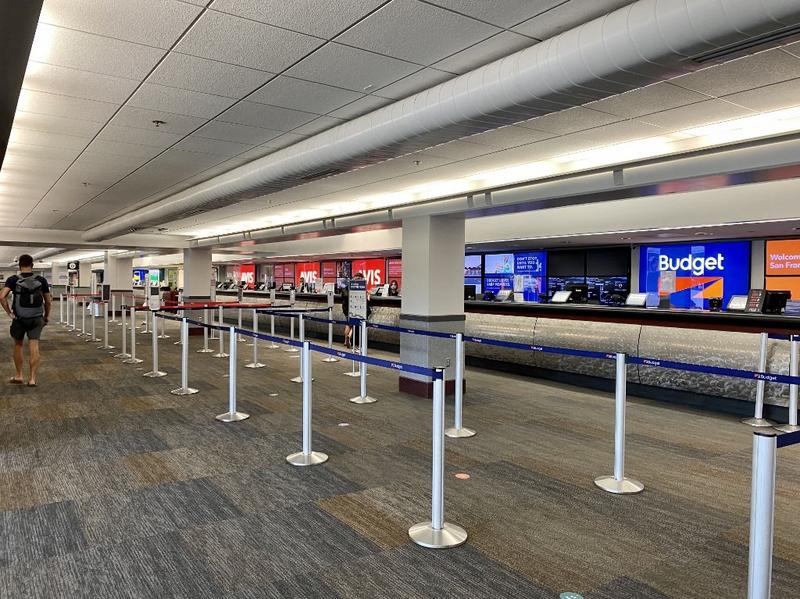 In January, the CDC mandated that all airline passengers aged two and older - including US citizens - be able to provide negative COVID tests within three days of coming to the United States or show proof of recovery from COVID-19.

Some Americans have feared they would be unable to have access to testing in some foreign countries. The CDC noted that some countries may restrict importation of tests that are not authorized or registered there.

Passengers using a self-test must use a telehealth service that provides real-time supervision remotely during testing.b

The rules took effect on Jan 26, after Canada followed other countries in imposing similar rules for nearly all international arrivals on Jan 7.

Brazil expects to sign a new deal next week with Pfizer Inc for 100 million more COVID-19 vaccine doses, a Health Ministry official said on Friday, which would double the US drugmaker's delivery to the Latin American country this year.

Rodrigo Cruz, executive secretary at the ministry, told journalists the contract has been agreed and just needs to be signed. Earlier this week, Health Minister Marcelo Queiroga said 35 million of these shots are due to be delivered in October.

Germany recorded 15,090 new cases on Saturday, continuing a recent trend of slowly declining numbers. The country remains in a partial lockdown as officials grapple with a third wave of the virus, but accelerating vaccinations and shrinking infections are increasing hopes that the authorities can ease some restrictions.

Britain will permit relatively free leisure travel to 12 nations and territories including Portugal as it seeks to reopen tourism while keeping control over the coronavirus pandemic.

A legal ban on international leisure trips will be eased from May 17, as expected, the Department for Transport said Friday. Return journeys from approved countries will require COVID-19 tests but no period of quarantine.

Also on the “green list” with Portugal and its island provinces of Madeira and the Azores are Israel, Iceland, the Faroes, Singapore, Brunei, New Zealand and Australia, together with the British territories of Gibraltar and the Falklands.

With the relaxation of border controls, the UK has put itself at the leading edge of attempts to return tourism to normal. The resumption of travel will also give an economc boost after the country rolled out vaccinations faster than the European Union following its split from the bloc.

Meanwhile, another 2,490 people in Britain have tested positive for COVID-19, bringing the total number of coronavirus cases in the country to 4,431,043, according to official figures released Friday.

Pfizer Inc’s chief executive said that low- and middle-income countries had opted not to order the company’s COVID-19 shot, in a letter posted online after the Biden administration said it supported waiving patents to expand global access to vaccines.

“We reached out to all nations asking them to place orders so we could allocate doses for them,” Chief Executive Officer Albert Bourla said in a letter addressed to Pfizer employees. “In reality, the high-income countries reserved most of the doses. I became personally concerned with that and I reached out to many heads of middle/low-income countries by letter, phone and even text to urge them to reserve doses because the supply was limited.”

Most low-and middle-income countries he contacted decided to place orders with other vaccine makers either because the underlying technology used in Pfizer’s shot was still untested, or there were local production options available, Bourla wrote.

He said some countries didn’t ever approve the vaccine, which Pfizer developed with its German partner BioNTech SE.

Some local beaches will again open from May 8, courts, primary and night schools from May 10 while museums will open their doors on May 14 and open-air cinemas from May 21.

Greece opens to international tourism from May 15, when more measures are expected to be lifted including the current ban on inter-regional travel.

The European Commission called on Friday on the United States and other major COVID-19 vaccine producers to export what they make as the European Union does, rather than talk about waiving intellectual property rights to the shots.

Commission head Ursula von der Leyen told a news conference on the sidelines of a summit of EU leaders that discussions on the waiver would not produce a single dose of COVID-19 vaccine in the short- to medium-term.

“The European Union is the only continental or democratic region of this world that is exporting at large scale,” von der Leyen said.

Only higher production, removing exports barriers and the sharing of already-ordered vaccines could immediately help fight the pandemic quickly, she said.

Certificates will be issued in pdf format, and citizens will be able to apply for them via the country's e-Citizens online system or from local health authorities' offices.

At the border crossings of Croatia and neighboring countries, 250 devices have already been set up to read the QR code on certificates showing that the passenger has been vaccinated, has contracted COVID-19 or has a PCR test showing that a person is not infected with the disease.

The number of confirmed COVID-19 cases in Africa has reached 4,614,936 as of Friday evening, the Africa Centers for Disease Control and Prevention (Africa CDC) said.

The Africa CDC, the specialized healthcare agency of the 55-member African Union, said the death toll from the pandemic stands at 123,676, while 4,149,677 patients across the continent have recovered from the disease.

South Africa, Morocco, Tunisia, Ethiopia and Egypt are the countries with the most cases in the continent, according to the Africa CDC.

The death toll rose to 9,057 with eight new fatalities during the last 24 hours, while 260 people are in intensive care units, according to a statement by the Ministry of Health.

Health Minister Daniels Pavluts said that new measures are urgently needed because the current trend is unmistakable -- the spread of the virus is accelerating. The minister also ruled out any relaxation of COVID-19 rules and restrictions in the near future.

The Latvian Center for Disease Prevention and Control (CDC) said that the spread of COVID-19 has been growing steadily lately. During the last seven days, the number of COVID-19 patients in Latvia's hospitals averaged at 656 and the number of ICU cases rose by 2.4 percent, the CDC said.

COVID-19 cases have continued to climb across all age groups, except seniors over 70 years of age, which the CDC attributes to more extensive vaccination in this age group.

Chilean Health Minister Enrique Paris reported on Friday that 15 of Chile's 16 regions registered a decline in COVID-19 cases in the last seven days, with cases only rising in southern Aysen.

Chilean authorities decided this week to reduce the number of quarantines and resume activities such as commerce and in-person classes in municipalities that have seen a decline in infections.

Meanwhile, more than 7 million people are fully vaccinated against COVID-19 in Chile after receiving both doses as part of the country's mass inoculation campaign, the Ministry of Health said on Friday.

Cuba reported 1,162 new COVID-19 infections and 12 more deaths in the last day, bringing the total to 113,876 cases and 713 deaths, the Public Health Ministry said on Friday.

Of the total daily cases, 1,108 were from community transmission, the ministry's director of hygiene and epidemiology Francisco Duran said in his daily report.

Havana registered 684 infections in the same period, a figure that shows the increased transmission in the capital's 15 municipalities, he said.

Tunisian Health Ministry on Friday reported 1,226 new COVID-19 cases, raising the total number of infections in the country to 318,236.

The death toll from the virus rose by 69 to 11,277 in Tunisia, and the total number of recoveries reached 274,270, the ministry said in a statement.

Earlier on Friday, Tunisian authority decided to impose a general lockdown for a period of seven days starting from May 9 to 16 to contain the rapid spread of COVID-19 in the country.

With the help of about 1,200 volunteers - among them doctors, nurses, medical students and residents - the "marathon" will see vaccinations continue around the clock during this period.

The vaccination marathon seems to be welcomed by the citizens of the capital, as some 1,500 people were immunized in about two and a half hours since the event started, said Viorel Jinga, rector of the Carol Davila University of Medicine and Pharmacy in Bucharest.

Ecuador's Health Ministry reported on Friday 1,561 new COVID-19 infections and 31 more deaths in one day, for a total of 396,888 cases and 13,854 deaths, amid a surge of infections that has saturated hospitals.

The province of Pichincha led in new cases over the last day, with 1,008, of which 913 corresponded to Quito, the capital and epicenter of the pandemic in the South American country.

In addition, authorities are concerned about the circulation in the country of more contagious coronavirus variants that have already begun to spread through community transmission.

On Friday night, 16 of the country's 24 provinces will begin a third lockdown over the weekend, amid a state of emergency in effect since April 23.

Mexico's health ministry on Friday reported 3,043 new confirmed corovnavirus cases and 484 more deaths, bringing the total number of cases in the country to 2,361,874 and fatalities to 218,657.

Separate government data published in March suggested that real death toll may be at least 60 percent above the confirmed figure.

Meanwhile, residents of Mexico City will be able to attend open-air concerts and sporting events at limited capacities beginning next week after a sustained drop in coronavirus infections, Mayor Claudia Sheinbaum said on Friday.

The new measures set to take effect on May 10 will include expanded access to movie theaters, banks and hotel-based conventions.

The relaxation of restrictions follow a months-long decline in the number of infections in the city and its sprawling metropolitan areas that house about 22 million people.

Mexico City's COVID-19 patient occupancy rates in hospitals have fallen to their lowest level in the entire pandemic, Eduardo Clark, director general of the city's Digital Government agency said at a press conference with Sheinbaum.

When asked if the opening could cause a spike in infections in the city, Sheinbaum said a number of factors could prevent that happening, including rising vaccination rates, discipline of citizens, warmer weather and a large number of previously infected citizens who could help generate herd immunity.

Ethiopia registered 778 new COVID-19 cases in the past 24 hours, taking the nationwide tally to 261,580 as of Friday evening, the country's Ministry of Health said.

The ministry said 18 new deaths from the coronavirus were reported across the country, bringing the national death toll to 3,840.

Ethiopia, Africa's second most populous nation, has reported the highest number of COVID-19 cases in the East Africa region.

Tanzania's new president, Samia Suluhu Hassan, on Friday stressed the importance of face masks in fighting COVID-19, ditching one of the most controversial policies of her late coronavirus-sceptic predecessor.

Hassan took office in March after the death of John Magufuli, who had urged Tanzanians to shun masks and denounced vaccines as a Western conspiracy, to the frustration of the World Health Organization.

On Friday, wearing a face mask and flanked by senior government and security officials, also all in masks, Hassan addressed prominent community elders in the commercial capital, Dar es Salaam.

"We have come with face masks because elders are in a group of people who are at higher risk of contracting the prevailing disease," she said. "We have found it is important to protect you."

Ghana has become the first country to get a second delivery of vaccines from the World Health Organization-backed COVAX facility after India, which manufactures the shots, halted exports.

The batch of 350,000 AstraZeneca Plc vaccines made by the Serum Institute of India arrived from the Democratic Republic of Congo Friday.

Nigeria plans to get 29.6 million doses of Johnson & Johnson vaccine through the African Vaccine Acquisition Trust led by Afreximbank.

The government is working on a supplementary budget to cover vaccine procurement and delivery, Finance Minister Zainab Ahmed said in a statement on Friday. Already, 29 billion naira have been released for the deployment of vaccines, which is 52 percent of what is required from 2021 to 2022, she said.