Galsang Tsering and his wife, Tasha Lhamo, rural residents of Markham county, Chamdo city, in front of their new house in May last year; a bird's-eye view of some of the new apartments for residents of the county who have been relocated. (PHOTO / XINHUA)

LHASA－Wanglang, 41, used to eke out a living as a herder in the city of Nagchu, Southwest China's Tibet autonomous region, as he lacked basic work skills.

"I told the local officials who visited my family that I would like to learn some skills," he says. After completing training courses and exams, Wanglang finally received his welding certificate.

I told the local officials who visited my family that I would like to learn some skills. ... It is the skills training that changed my life

Wanglang, owner of a welding workshop in Nagchu, Tibet

Wanglang's story is a familiar one on the plateau, as an increasing number of farmers and herders in Tibet now have the opportunity to pursue a career different from that of their forebears.

Before the peaceful liberation of Tibet in 1951, most of the residents in the region lived in a system of feudal serfdom and abject penury.

Since the democratic reform launched in 1959, China has mobilized the whole nation to support the development of Tibet and gradually established a complete modern industrial system in the region. This year marks the 70th anniversary of the plateau region's peaceful liberation.

Over seven decades, the number of permanent residents in Tibet has increased from more than 1 million to over 3.5 million. By the end of 2019, Tibet had lifted all of its 74 impoverished counties and residents out of poverty. 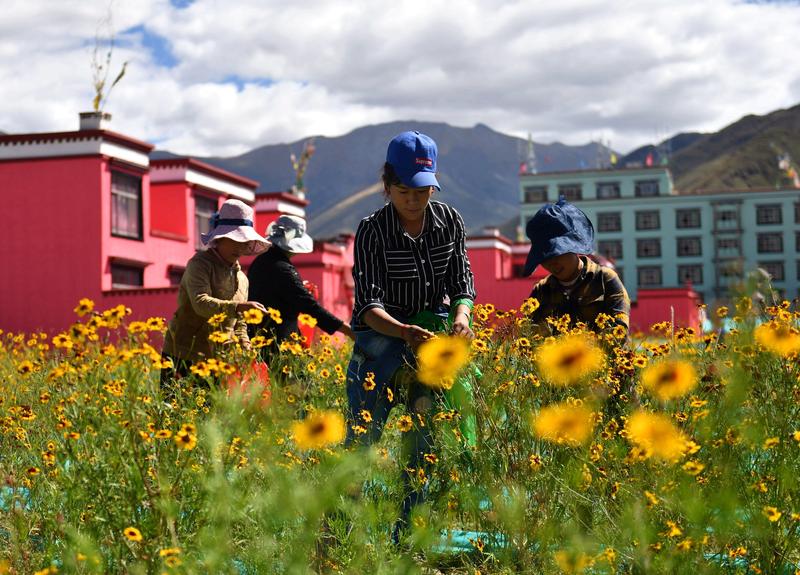 With rapid economic and social development, a greater number of surplus rural workers in Tibet have bid farewell to the tedious life of farming and herding and ranged further afield in search of jobs in townships and cities.

Ngawang, a villager in Lhatse county, the city of Shigatse, now works in a Tibetan carpet cooperative near her home, making more than 2,000 yuan a month.

"My family can also receive dividends of 10,000 yuan each year from the village's herding cooperative," Ngawang says.

Since 2016, nearly 5 million farmers and herders in Tibet have landed new jobs, while around 100,000 people have received vocational skill training, according to the regional human resource authority.

Kelsang Droma, a researcher with the China Tibetology Research Center, says the urban-rural integrated development and rapid urbanization in Tibet will accelerate progress in Tibet's employment structure and become a major force in promoting the region's economic growth.

"It is the skills training that changed my life," he says.