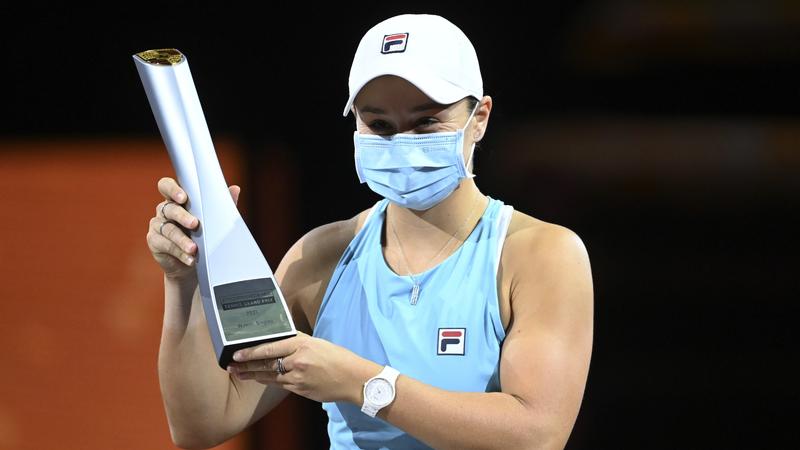 Ashleigh Barty of Australia holds the trophy after defeating Aryna Sabalenka of Belarusia, during the WTA Tour Women Final match in Stuttgart, Germany on April 25, 2021. (MARIJAN MURAT / POOL VIA AP)

Top-seeded Ashleigh Barty and fifth-seeded Aryna Sabalenka traversed through their semifinal matches on Thursday to advance to the championship match of the Mutua Madrid Open.

Saturday's clash will mark the second time in less than two weeks that Barty and Sabalenka will meet in a final. The Australian rallied for a 3-6, 6-0, 6-3 win over Sabalenka to win in Stuttgart on April 25.

Physically I have to be ready for this match (with top-seeded Ashleigh Barty) ... She's No.1, she's great. I played her in Stuttgart. It's not an easy game. I will do everything I can to prepare myself as good as I can. Just looking forward for this battle.

Sabalenka, who had 21 winners against 11 unforced errors in Thursday's semis, is ready to take another swing at Barty.

"Physically I have to be ready for this match," said Sabalenka, who is from Belarus. "She's No.1, she's great. I played her in Stuttgart. It's not an easy game. I will do everything I can to prepare myself as good as I can. Just looking forward for this battle."

Barty holds a 4-3 edge in career matches against Sabalenka.

Barty played her semifinal match prior to knowing there would be another tussle with Sabalenka.

ALSO READ: Barty through as Garros winners set to meet in Madrid Open

But she was pleased with her performance and the victory was her 16th straight on clay surfaces.

"I've learned a lot more about it, without a doubt," Barty said of clay. "I promise you, I'm still counting down to the grass court season. It's one of my favorite times of the year. I think the memories and the learnings now that we're getting from the red clay has been really cool, to be able to challenge myself in different ways."

Thursday's victory also was important to Barty because she was upset by Bodosa 6-4, 6-3 last month in the quarterfinals of the Volvo Car Open at Charleston, SC.

"You have to learn from every game, every match you play against an opponent," Barty said. "I definitely learned a lot from the match we played in Charleston. There was a small adjustment. I think just learning from some of her patterns, tendencies that came through and showed through in that match in Charleston.

"I think I was just able to control the court a little bit better."

Aliaksandra Sasnovich of Belarus upset fourth-seeded Tamara Zidansek of Slovenia to advance to the quarterfinals at Saint-Malo, France.

Second-seeded Rebecca Peterson of Sweden also moved on with a 4-6, 6-4, 4-0 win over Russia's Anna Kalinskaya, who retired in the third set.

Russia's Varvara Gracheva beat Bulgaria's Viktoriya Tomova when the latter retired. Gracheva won the first set 6-4 and the second was tied at 5-5.