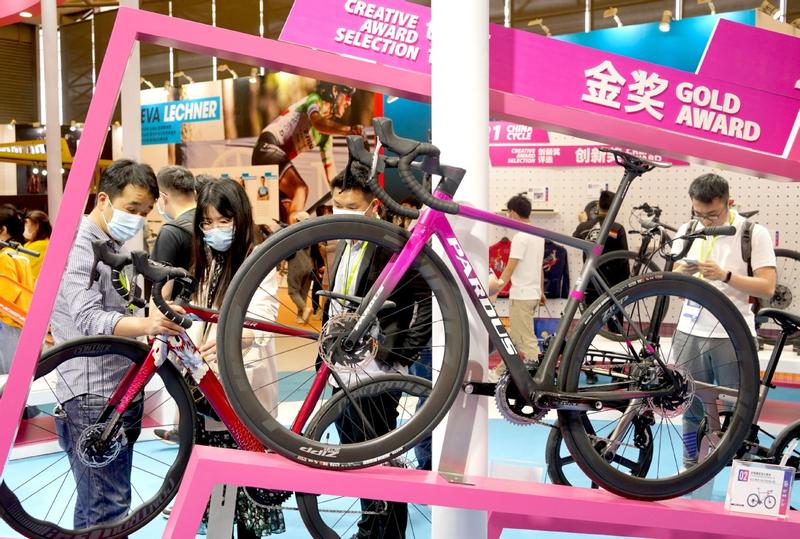 Nearly 10.7 million bicycles were produced in the country during the first quarter, up 70.2 percent on a yearly basis, the China Bicycle Association said during the 30th China International Bicycle Fair in Shanghai on Wednesday. During the same period, 7.081 million electric bicycles were produced in China, up 86.3 percent over the same period a year ago, it said. Meanwhile, the number of bicycles exported stood at 16.185 million in the first quarter, up 73.4 percent from a year ago, while spare part exports rose by 111.4 percent to US$1.125 billion.

Nearly 10.7 million bicycles were produced in the country during the first quarter, up 70.2 percent on a yearly basis, the China Bicycle Association said

China currently accounts for 60 percent of the global bicycle trade, the association said. Last year, the industry produced 116.54 million bicycles, a year-on-year increase of 15.3 percent. Meanwhile, annual exports of bicycles and electric bicycles, and other related spare parts reached US$7.88 billion, up 23.1 percent on a yearly basis.

"We returned to work in early February last year, and soon received a large number of orders. For a brief period, there was a shortage of bicycles due to the huge demand," said Zheng Youwu, general manager of Ningbo Julong Machinery Co Ltd, a leading bicycle accessories firm, which makes bicycle parts like foot pedals and axles.

According to Zheng, the company sold 50 million pairs of foot pedals globally in 2019, and the number surged to 62 million in 2020. This year, sales are expected to reach 70 million, said Zheng.

"About 65 percent of our products were exported to overseas markets, especially in Europe and the United States," he said.

Wang Qinghua, general manager of Bafang Electric (Suzhou) Co Ltd, a company that provides batteries for pedelecs or pedal electric cycles, said his company's sales rose by 110 percent year-on-year in the first quarter, and nearly all of their products were exported to foreign countries especially Europe and the US.

Similar growth has also been seen in the domestic market.

According to Yang, their bestselling bicycles are priced between 700 yuan and 1,500 yuan (US$108 to US$231). But the market has been slowly veering toward midrange to high-end bicycles in recent years, he said.

Yan Yiming, chief executive of Forever Bicycle Co, said:"We did a lot of cross-border cooperation and online promotions to attract the younger consumers. Online sales accounted for 65 percent of the total sales."

However, industry leaders are concerned whether the growth momentum will be sustained in the second half of this year.

"The market is likely to decline because part of the higher sales last year was due to the contagion shutdowns. The market might return to normalcy soon," Yan said.

Yan explained that the epidemic led to an increase in demand for bicycles to maintain social distancing and keep fit, and months of suspension of the industry also led to an accumulation of orders, resulting in a rapid rebound after the shutdown.

"There might be a bubble among the orders because suppliers in all links placed more orders than they actually needed after seeing the growing market," Zheng said.

But both of them believe that the long-term trends signal a return to stability, but, in a different manner.