Red tourism hits a high with May Day travelers 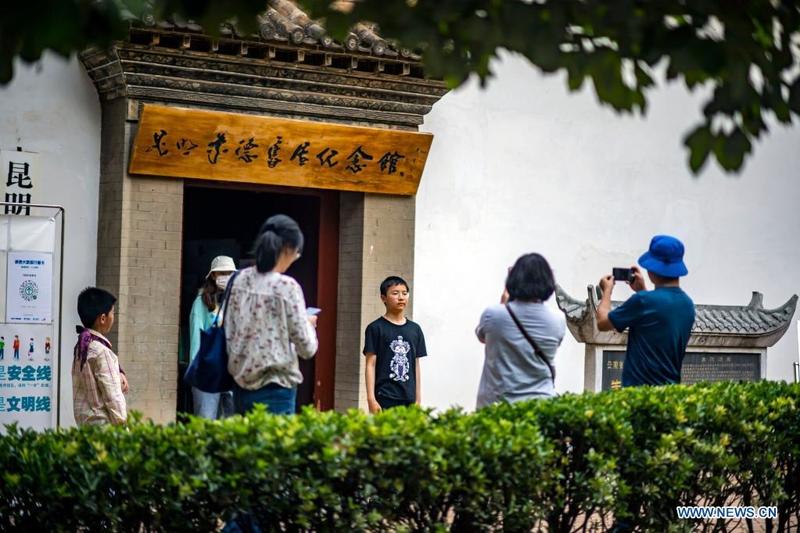 Visitors pose for pictures at the former residence of Zhu De, a revolutionary pioneer, in Kunming, Yunnan province, on May 1. (PHOTO / XINHUA)

For the May Day holiday, 12-year-old Zhou Xinyue planned the trip for her family. Instead of going to the beach, she chose to visit four revolutionary sites in Guangdong province.

"I've heard my classmates talking about the East River Column, but I don't know much about its history, so I wanted to visit the memorial to learn about it," Zhou says."My parents and elder brother were happy to join me."

Revolutionary sites have become a travel hit during the May Day holiday. As of 3 pm on May 1, the first day of the five-day holiday, the provincial culture and tourism department says a total of 23,000 visits had been made to 13 red tourism sites in Guangdong, up by 298.9 percent year-on-year.

The department recently introduced a red tourism passport covering 30 revolutionary sites in the province, and also includes a technological touch with treasure hunting games. The passport has attracted many young people to these sites during the holiday.

Tourist Xu Sheng says he enjoyed his visit to the peasant movement institute in Guangzhou.

"The visit was good, and I've set a goal to visit all the sites and get all the stamps in my red tourism passport this year," Xu says.

In Shaoshan, the hometown of Chairman Mao Zedong in Hunan province, visitors waited in line to visit Mao's former residence. 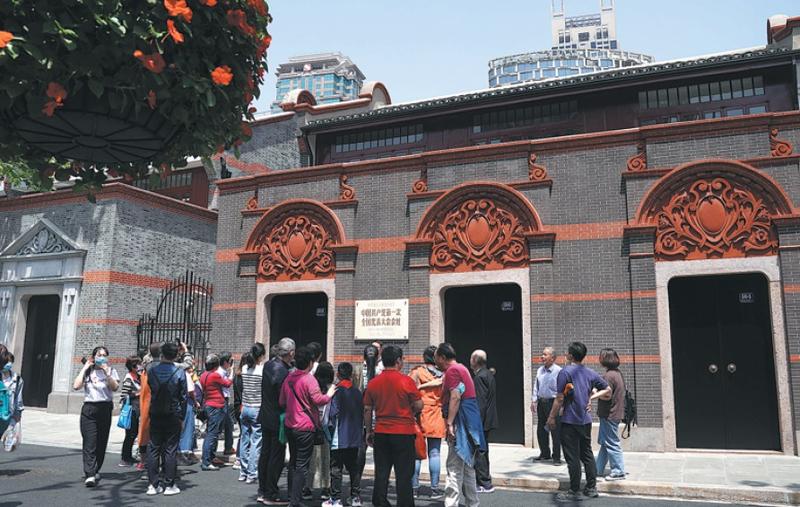 Tourists visit the site where the First National Congress of the Communist Party of China was held in Shanghai in 1921 during the May Day holiday. (PHOTO / XINHUA)

Visitors also took photos on the Mao Zedong Square, which is decorated with flowers and inscribed with the words "Centenary of the Communist Party of China".

The city of Ganzhou in Jiangxi province, which is also abundant in red tourism sites and relics, received 420,000 tourists on May 1. Its county-level Ruijin city received 195,000 visitors, up by 650 percent year-on-year.

"Praise must go to the generation of revolutionaries who went through all the hardships to build our country. We'll ask our children and grandchildren to come and visit revolutionary sites too," Tan says.

According to online platform TravelGo, the number of flights to red tourism destinations during the Qingming and May Day holidays this year accounted for 15.6 percent of all flights booked. It is an increase of 4 percentage points compared with the same period in 2019.

To celebrate the centenary of the CPC, the culture and tourism authorities in Shanghai and the East China provinces of Jiangsu, Zhejiang and Anhui also launched a series of red tourism themed activities.

Yan'an, a city rich in revolutionary sites and relics in Shaanxi province, designed 10 red tourism routes for the May Day holiday. Dance performances and shows are also staged in a red tourism themed train heading for Yan'an.