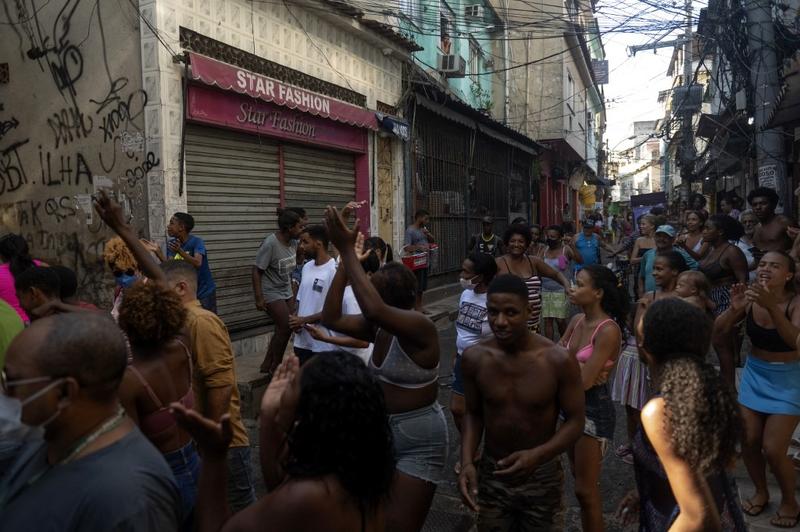 Residentes protest after a police operation against alleged drug traffickers at the Jacarezinho favela in Rio de Janeiro, Brazil, on May 06, 2021. A massive police operation against drug traffickers in a Brazilian favela Thursday left 25 people dead, turning the impoverished Rio de Janeiro neighborhood into a battlefield and drawing condemnation from rights groups. (MAURO PIMENTEL / AFP)

RIO DE JANEIRO - At least 25 people were killed in a shootout between suspected drug traffickers and police in Rio de Janeiro on Thursday, one of the state’s deadliest police raids, police said.

People targeted in the raid in the poor Jacarezinho neighborhood tried to escape across rooftops as police arrived in armored vehicles and helicopters flew overhead, television images showed. The firefight forced residents to shelter in their homes.

The victims included one police officer, and the remainder were suspected members of the drug-trafficking gang that dominated life in the slum, including some of its leaders, police said.

It was the deadliest single police operation in 16 years for Rio state which has suffered for decades from drug-related violence in its numerous favelas.

The bloodbath prompted criticism from human rights groups including Amnesty International, who lambasted the police for the “reprehensible and unjustifiable” loss of life in a neighborhood mostly populated by black and poor people.

The number of people killed in this police operation is reprehensible, as is the fact that, once again, this massacre took place in a favela.

“The number of people killed in this police operation is reprehensible, as is the fact that, once again, this massacre took place in a favela,” said Jurema Werneck, executive director of Amnesty International Brazil, referring to the informally organized neighborhood with few public services.

A 2005 raid in the Baixada Fluminense in Rio’s violent northern outskirts killed 29 people.

“This is one of the largest death tolls in a police operation in Rio, surpassing 19 at Complexo do Alemão slum in 2007, except we did not lose one of ours then,” police chief Ronaldo Oliveira told Reuters.

Human Rights Watch (HRW) said that Rio de Janeiro prosecutors have a constitutional obligation to oversee the police and pursue criminal investigations of police abuses. It called for a thorough and independent investigation into the deaths.

According to HRW, Rio police killed 453 people and at least four police officers died in police actions during the first three months of the year, despite a Supreme Court ruling prohibiting operations in communities during the COVID-19 pandemic except in “absolutely exceptional cases.”

Police said in addition to drug trafficking, the gang robbed trucks of cargo and held up commuter trains to steal from passengers.

Police displayed an arsenal of seized weapons at a news conference: six assault rifles, 15 handguns, a machine gun, 14 grenades and a round of artillery ammunition.