Although NFT-backed sales are gaining traction in the art world, questions about the viability of this new digital currency abound. Joyce Yip has some answers. 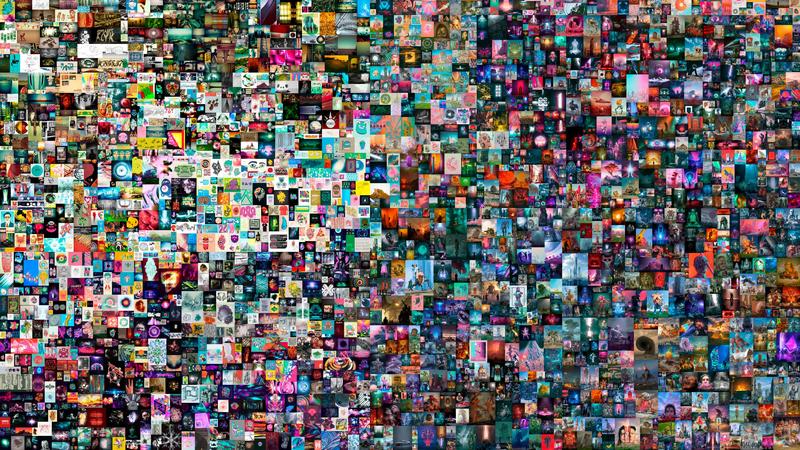 EVERYDAYS: THE FIRST 5000 DAYS, a collage of digital images created by Beeple, was the first piece of NFT-backed art offered at a Christie’s auction and sold for US$69.3 million. (PHOTO PROVIDED TO CHINA DAILY)

In the past six months, three major auction houses — Christie’s, Sotheby’s and Phillips — opened their NFT sales account. And all of them fetched at least seven digits. At Christie’s March 2021 sale Beeple’s (Mike Winkelmann) EVERYDAYS: THE FIRST 5000 DAYS went for a whopping US$69.3 million — the third-highest price achieved by a living artist, topping Jeff Koons’ orange Balloon Dog (US$58.4 million).

An acronym for “non-fungible tokens”, NFTs are units of data stored on the blockchain that cannot be changed or replaced. A 10 dollar bill, for example, can be traded for two fivers, and hence is fungible, whereas an NFT is unique and conversion-resistant. Usually, NFTs are used to represent cyber files, including digital art. Although an NFT holder does not have exclusive right to the concerned artwork — meaning everyone with access to the internet can still obtain and copy the file — an NFT is proof of the item’s authenticity, and purchasing one gives the buyer bragging rights, similar to owning an original piece of art, signed by the artist. 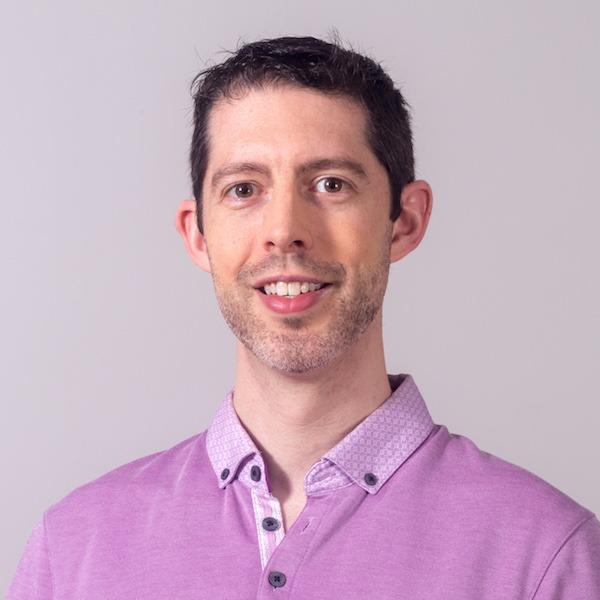 Not so long ago…

NFTs captured the art world’s attention in 2017 after two “creative technologists” — John Watkinson and Matt Hall — debuted 24-by-24 pixel images of pipe-smoking heads that were soon being treated as one-of-a-kind collectibles. More such art surfaced in the market, some more gimmicky than others, such as the googly-eyed CryptoKitties, which has accumulated a total trading volume of US$39 million since its release in 2017. As of last year, the NFT market is worth about US$250 million, thanks to “revenge spending” during COVID-19 and the new-found enthusiasm of Bitcoin millionaires.

While skeptics warn that the exuberance currently seen around NFT might be a passing fad, even traditional brands dealing in tangible products — like DC Comics and Nike — have embraced this new digital currency format. And that three of the world’s major auction houses have jumped on to the NFT bandwagon has further legitimized its growing influence.

NFTs are prized for the unique stamp of authenticity they place on a work of art and also help trace all past transactions. Still, it’s not one-size-fits-all.

For instance, Mad Dog Jones’ REPLICATOR, sold recently by Phillips, turns the idea of investing in art, i.e. buying an original work with no duplicates, on its head. Its Generation 1 begins as an illustration of a photocopy machine in an office and will continue to produce new NFTs every 28 days for six months. Each subsequent generation will produce one less artwork in its lifetime until Generation 7 emerges. The piece’s anonymous buyer possesses all the NFT jams — the technology that could be applied to stop the process of replication. 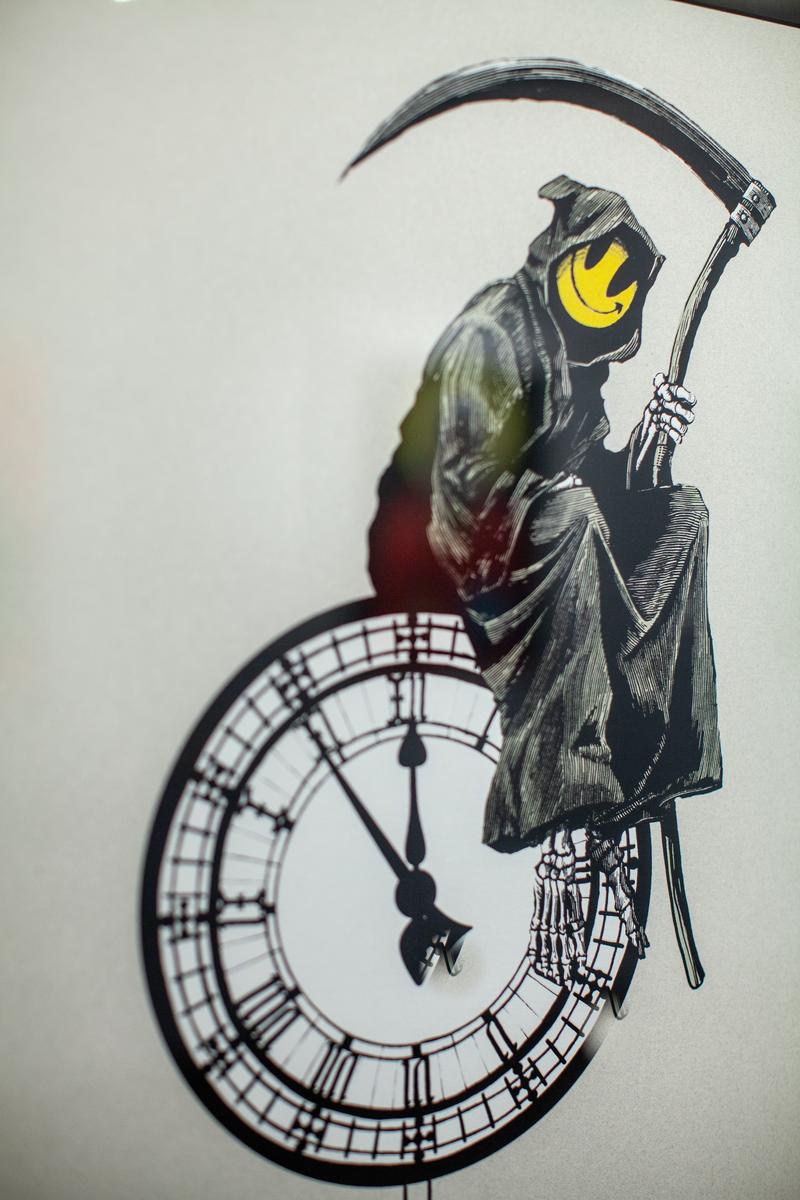 Are record prices for real?

Beeple created EVERYDAYS by posting a new digital image online  on a daily basis since May 2007 and collating them. It was the first piece of art up for an NFT-backed auction at Christie’s where cryptocurrency was accepted as payment. However, the auction house had dabbled in blockchain technology earlier, in 2018, by using a digital ledger to record the sales from its Barney A. Ebsworth Collection.

Sotheby’s now lists some of its lots under The Fungible Collection. It is also applying NFT to tangible goods. Its Important Watches Spring Sale in Hong Kong in April saw limited-edition timepieces accompanied by an NFT record of provenance plus a video revealing the watchmaking process.

Robert Sleigh, managing director of operations, Sotheby’s Asia, regards NFT “as the glue between physical assets and digital ownership” and adds that he’s keen to explore the “tremendous crossover potential across a variety of luxury categories, as well as traditional fine art.” 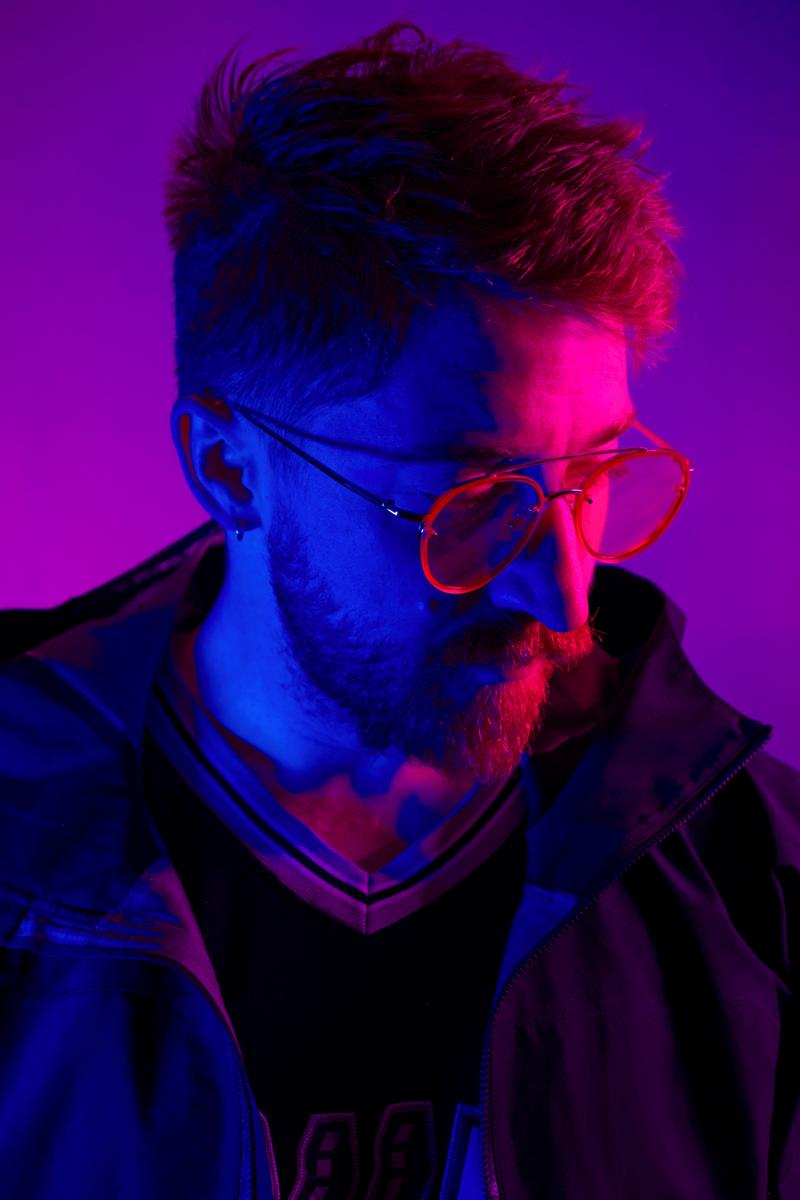 However, William Entriken, the main author of the NFT standard ERC-721, sounds skeptical when it comes to reports of front-page-worthy hammer prices fetched by NFT-backed art, hinting at a possible collusion between auction house and buyers, especially when the latter remain anonymous.

“I have no accusations here, and I have no evidence, but some of the hammer fees may go back to the buyer. There are people in the crypto-world with vested interests,” he said, going on to list some of the theories about Beeple’s success circulating in the market.

“Theory one is that the auction house and the buyer colluded to get the prices as high as possible in order to build the viability of the NFT marketplace. Theory two is that Beeple was involved, which is not very likely because Beeple was already a prominent artist before becoming an NFT person.” 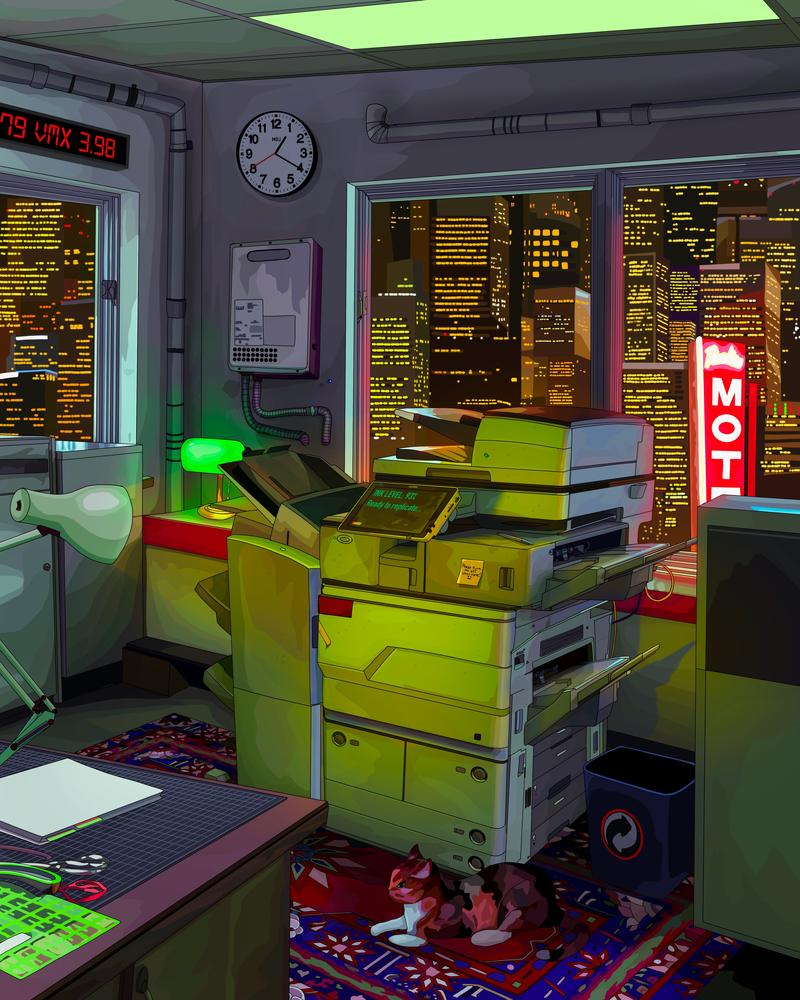 Is the art any good?

Whether its success is organic or not, increasingly NFT is making inroads into the traditional art spaces. House of Fine Art Gallery in London has launched its ARTCELS digital investment platform where subscribers can buy shares in a portfolio of blue-chip art by the likes of Kaws, Banksy, Damien Hirst, Jeff Koons and more. Similar to an investment fund, subscribers have no say in the sale of these works but will receive dividends as part of the purchasing agreement written directly into the relevant blockchain code. ARTCELS releases new portfolios annually and tours the art pieces around the world, giving subscribers a chance to see their investments in the physical space. Last year’s XXI series went to London, Los Angeles and Mykonos; and the Millennials portfolio, released in April, is expected to reach Shanghai by the end of this year.

“We love NFT-backed digital art but it all must link to quality art with a real process,” said HOFA founder Elio D’Anna. “The value isn’t just in the digital file or the token. So many seem to think they can just release anything with NFT and it can sell for millions.” 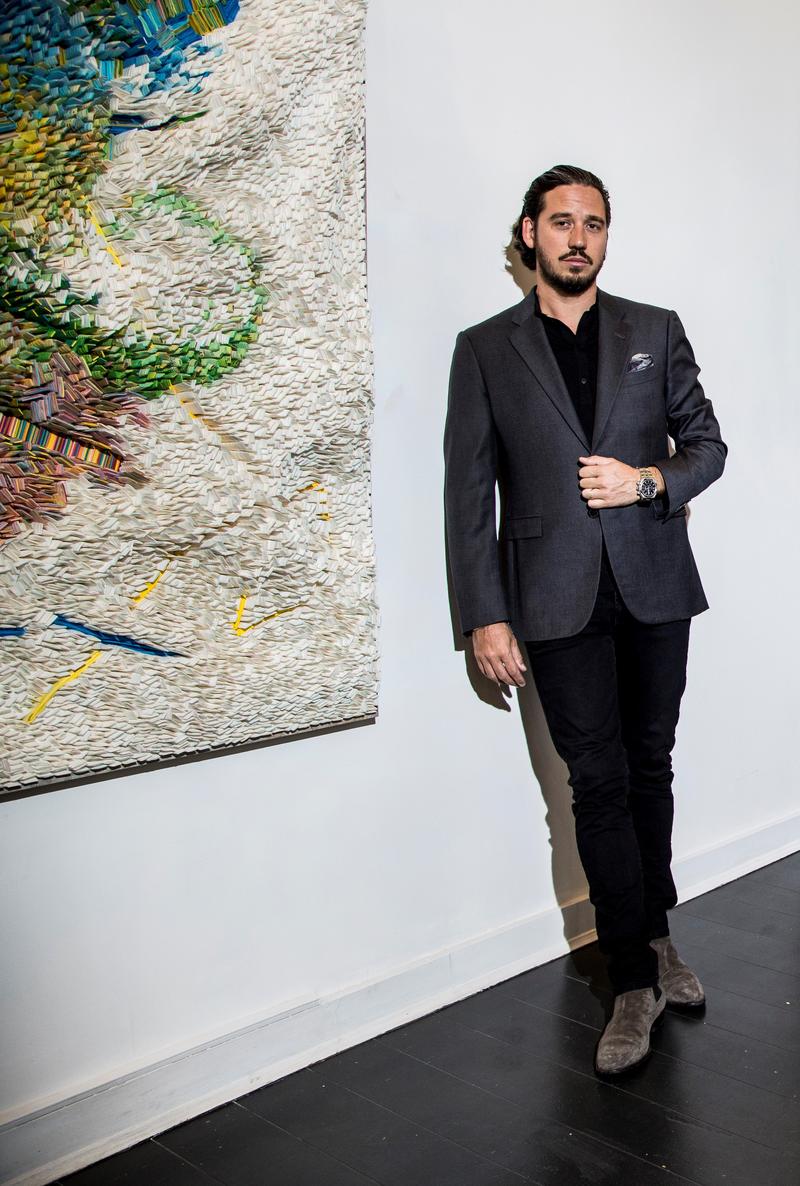 HOFA founder Elio D’Anna says it is increasingly possible to connect NFTs with art in tangible form. Observer, by Vladinsky, is part of HOFA’s May portfolio of NFT art. (PHOTO PROVIDED TO CHINA DAILY)

“Earlier, NFTs were all about numbers and profits. But we’re getting to a point where we see really good work and realizing the importance of selling NFT with something physical and making a connection between the two, rather than focusing on just the metaverse,” he added.

Entriken, however, argues that the NFT art buyer is far from what he calls an “entrepreneurial opportunist”. Aside from having a genuine appreciation for the artist and artwork, he said, the NFT art investor is looking for a foolproof stamp of authenticity.

“With an NFT, there’s no confusion that it is 100 percent real. It holds the same importance as your (luxury designer) handbag’s hologram sticker, which is much easier to copy.”

“Some of the stuff you see on Rarible (a blockchain marketplace for collectibles), ... there’s a lot of FOMO (fear of missing out) happening, he said, adding that speculators often “don’t even look at what they’re buying”. 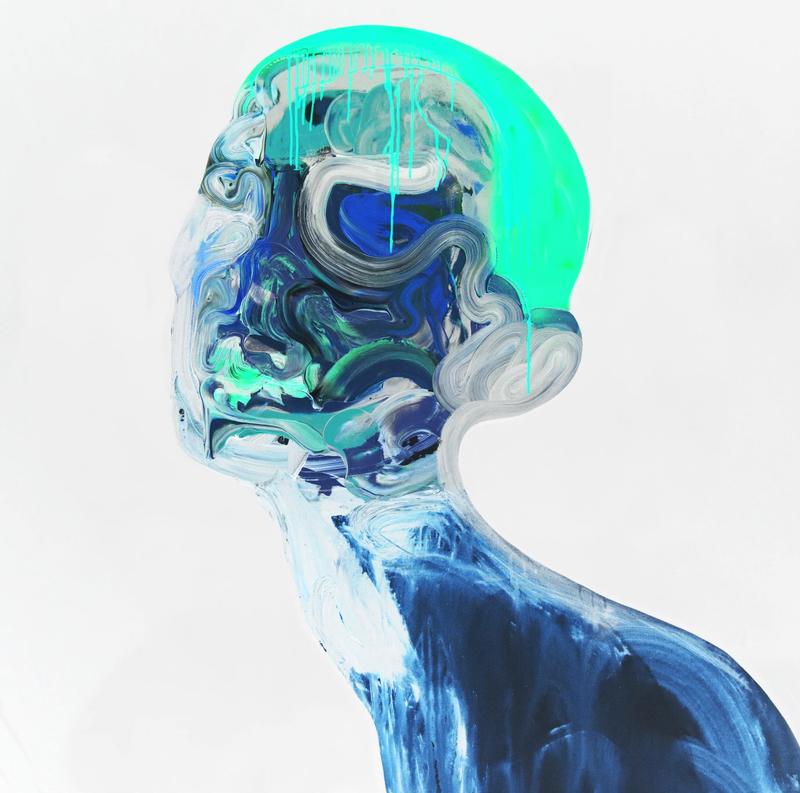 HOFA founder Elio D’Anna says it is increasingly possible to connect NFTs with art in tangible form. Observer, by Vladinsky, is part of HOFA’s May portfolio of NFT art. (PHOTO PROVIDED TO CHINA DAILY)

Aside from authentication, the use of NFT in art promises unprecedented transparency, such as automating the payment of resale royalties and creating new models of profit distribution that ultimately give control back to the artist.

Entriken, therefore, advises buyers to stick to reputable platforms, comparing buying from lesser-known marketplaces to “randomly walking into a coffee shop and bidding US$2 million on the art on its walls”.

Despite the current confusions and skepticism about the efficacy and viability of the system, NFTs are the currency of the future. As companies and creators continue to explore its applications, find correlation with other currencies and eliminate the loopholes for illegal activities, the value of NFT in the areas of authentication, record-keeping and giving artists another stage to shine on will likely be better appreciated.

In other words, watch this space: NFTs are staying.