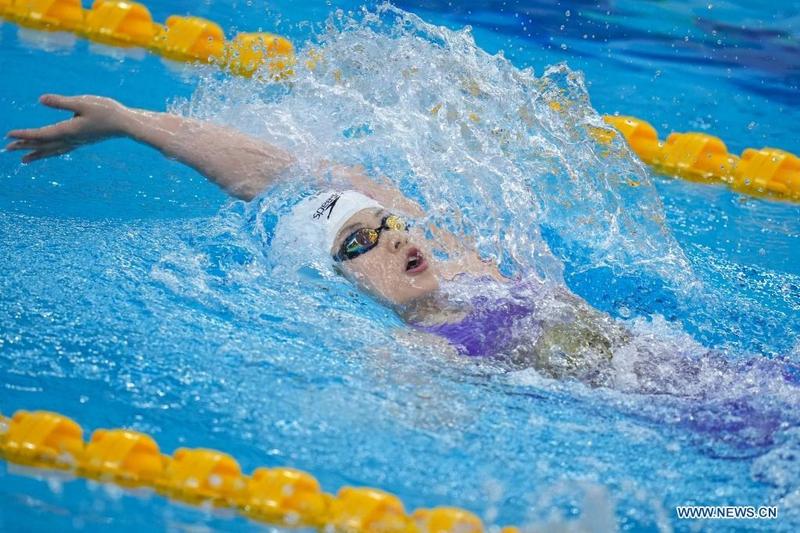 "I smiled for so long that my jaws hurt," said the Ningbo youngster who was still smiling.

On Tuesday, Yu, who led the 200m individual medley from start to finish, smashed 2:09.64 for the gold medal and set a new world junior record, the sixth-best in the world this year.

Yu Yiting started swimming when she was eight and joined the Zhejiang provincial team only two years later. According to her coach Wang Haibo, Yu has good physical fitness, great strength, strong self-control ability and a clear mind

"I had no pressure before the final as my coach told me to follow my own heart and pace in the final. I entered the national team at the end of last year and had more physical training and that helped me a lot. But my weakness is the backstroke, where I really need to improve," Yu said.

Yu started swimming when she was eight and joined the Zhejiang provincial team only two years later. According to her coach Wang Haibo, Yu has good physical fitness, great strength, strong self-control ability and a clear mind.

At the end of 2020, Yu was selected to the national team. She has strengthened her physical training and now swims about 7,000 meters during each water session. "Training with the national team is much more systematic," said Yu. "My strength and physical fitness improved a lot. My core strength is okay, but long-distance running is my weakness."

Training with the national team is highly intensive too, which usually lasts from 6:50 am to 9 pm, with eating, training, resting and massaging occupying every day. Yu's biggest wish is "just to sleep."

Yu believes that she is "extroverted and the fun one on the team." "But I actually practice too much every day; sometimes I might even cry," said Yu. "But no matter how much I cry, I still have to continue to swim."

World record holder Katinka Hosszu of Hungary and Ye Shiwen are her idols. "How 'Sister Ye' came back from the lows of her career inspired me a lot," said Yu. "She encourages me very often. She told me that I can do it and I really made it within 2 minutes and 10 seconds!"

Postponing the Tokyo Olympics by one year became a rare opportunity for the young Yu.  "I didn't even think about the Olympics a year ago," she said. "The extension gives me more time to train. My goal for the Olympics is to improve myself, train well and do well."