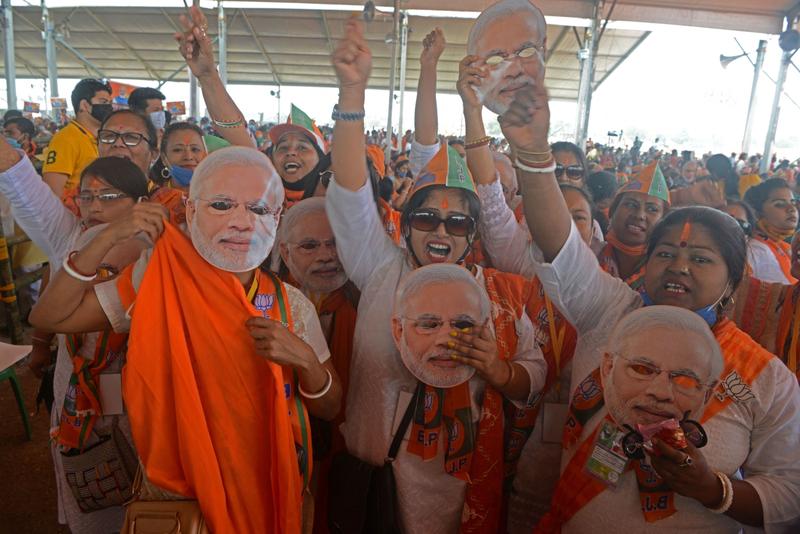 Supporters of Bharatiya Janata Party (BJP) wearing face cutouts of Indian Prime Minister Narendra Modi attend a public rally being addressed by him during the ongoing fourth phase of the West Bengal's state legislative assembly elections, at Kawakhali on the outskirts of Siliguri on April 10, 2021.  (PHOTO / AFP / GETTY IMAGES)

Indian Prime Minister Narendra Modi’s party lost an election in a key state he visited frequently before the recent virus surge forced him off the campaign trail, adding to growing signs of a backlash over his government’s handling of the world’s worst COVID-19 outbreak.

In West Bengal, incumbent Chief Minister Mamata Banerjee’s All India Trinamool Congress won more than 70 percent of 292 seats up for grabs, while Modi’s Bharatiya Janata Party took 76, according to results posted on the Election Commission of India on Monday. Last month, the prime minister predicted his party would win more than 200 seats in the state, which held voting over eight phases starting on March 27.

Modi’s opponents won in the southern states of Tamil Nadu and Kerala, while his party kept power in the northeastern state of Assam and gained the federally-controlled territory of Puducherry, where it contested in alliance with a regional party. He conceded West Bengal in a series of posts on Twitter, congratulating Banerjee while also noting the BJP made gains in the state.

Modi’s opponents won in the southern states of Tamil Nadu and Kerala, while his party kept power in the northeastern state of Assam and gained the federally-controlled territory of Puducherry, where it contested in alliance with a regional party

Grim scenes of overcrowded crematoriums and pleas for oxygen have overshadowed the election in recent weeks, with Modi coming under fire for campaigning in front of huge crowds as infections were spiraling. Daily deaths in India hit a record 3,689 on Sunday, while the number of cases slowed slightly after the country became the first to cross the mark of 400,000 cases in a day.

“As three strongly anti-BJP regional leaders have emerged victorious, they are likely to be the nucleus of the opposition challenge to Modi in the months ahead as he battles the backlash to his mismanagement of the Covid crisis,” said Arati Jerath, a New Delhi-based author and political analyst who has written about Indian politics for nearly three decades. The results weaken the government and indicate there are “huge political and constitutional challenges ahead for Modi.”

The vote count on Sunday came a day after 12 patients, including a senior doctor, died when a hospital in the capital New Delhi ran out of oxygen after sending out desperate calls for help -- the third such incident in the last 10 days. Shortages of beds, oxygen and medical supplies at major hospitals during the latest virus wave have shown a spotlight on India’s underfunded health system.

“We have been raising this kind of alarm to the government, because it is an ongoing situation that is worsening everyday,” Sudhanshu Bankata, the executive director of the Batra Hospital, said by phone.

Delhi Chief Minister Arvind Kejriwal said Saturday his administration had told both the courts and the federal government that his state had only been allocated 490 metric tonnes of oxygen per day, about half of what it needs.

“How are things supposed to work out?” Kejriwal said in a statement Saturday. “Delhi needs oxygen.”

In the elections, Modi’s BJP had sought to expand its footprint in the country’s east and south, where it has struggled to gain traction. The victory for his party in Assam, where a religion-based citizenship act spurred protests, could further embolden the government to implement the controversial law across the country. Still, it failed to unseat West Bengal’s Banerjee, one of the most outspoken critics of Modi’s pro-Hindu agenda.

In Kerala, a coalition led by the communist party is poised to retain power in a blow to the Congress party, which had ruled India for decades and has been the main opposition party at the federal level. It failed to win back either Kerala or Assam.

Rahul Gandhi, the former Congress leader and great-grandson of India’s first prime minister, Jawaharlal Nehru, will come under increasing pressure, according to Sandeep Shastri, a political analyst and vice-chancellor at the Jagran Lakecity University at Bhopal.

The Congress party “would gradually lose its position as a nucleus of the anti-BJP political force and Rahul Gandhi’s role will surely come under fire,” he said.