US Navy at 'unacceptable risk' from missiles, Pentagon tester warns 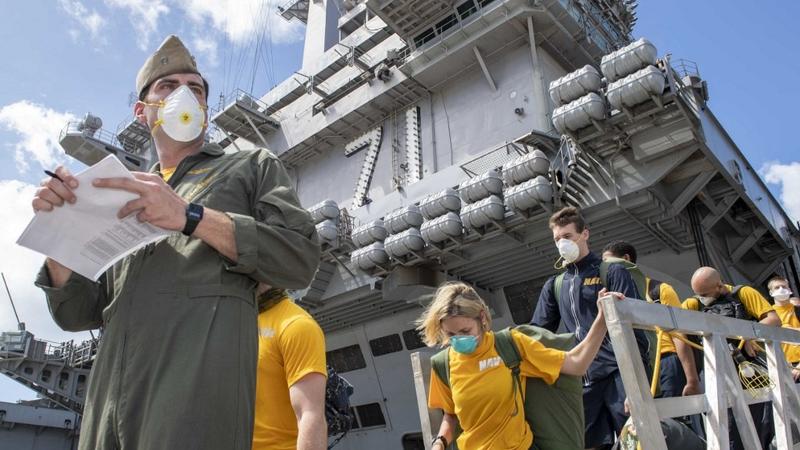 This handout photo released by the US Navy shows sailors assigned to the aircraft carrier USS Theodore Roosevelt (CVN 71) wearing face masks as they depart the ship to move to off-ship berthing on April 10, 2020. (PHOTO / AFP)

The US Navy “currently does not have a well-defined strategy or funding” for testing to determine whether radar and self-defense systems on board many of its vessels can stop anti-ship cruise missiles, according to the Pentagon’s acting director of combat testing.

The shortfalls are “creating an unacceptable risk in our ability to evaluate the operational effectiveness and survivability of future ships in combat,” according to Raymond O’Toole, acting director of operational testing and evaluation. His remarks came in a prepared statement for a hearing Wednesday by a Senate Armed Services subcommittee examining the Defense Department’s acquisition system.

Although most of this year’s debate in Washington over Navy shipbuilding is focused on constructing more vessels and improving shipyard maintenance capabilities,

O’Toole didn’t single out specific ships in his statement, but his office’s last two annual reports highlighted the Navy’s failure to complete several such tests on the US$13 billion Gerald R. Ford aircraft carrier.

Tests of a ship’s self-defense systems against anti-ship missiles can’t be performed on an active Navy vessel with a crew aboard for safety reasons. So testing depends on the availability of an unmanned test platform to fire at, live test data and a sophisticated and verified model and simulation, O’Toole said.

The Navy “currently does not have a well-defined strategy or funding to provide any of these three capabilities,” he said.