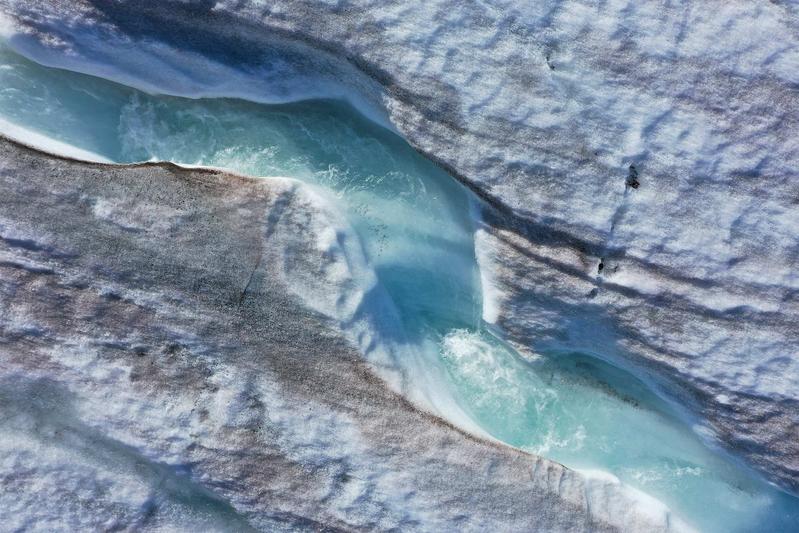 In this aerial view from a drone water carves a winding channel down the surface of the melting Longyearbreen glacier during a summer heat wave on Svalbard archipelago on July 31, 2020 near Longyearbyen, Norway. (PHOTO / BLOOMBERG)

The world’s glaciers are shrinking at a faster rate than before, with densely-populated parts of Asia at risk of flood and water shortages if the trend continues.

That’s the conclusion of a new study by ETH Zurich and University of Toulouse researchers, who found the world’s ice fields lost 298 gigatons of ice per year from 2015 to 2019, a 30 percent increase in the rate of retreat compared with the previous five years. Glaciers in Alaska, the Alps and Iceland are among those disappearing at the fastest pace.

The scientists used images from a special camera aboard NASA’s Terra satellite, which has circled the Earth every 100 minutes since its launch in 1999

“The situation in the Himalayas is particularly worrying,” said Romain Hugonnet, one of the study’s authors, adding that swathes of India and Bangladesh could face water stress during dry periods when major rivers like the Ganges and Indus are mainly fed by glacial runoff.

The scientists used images from a special camera aboard NASA’s Terra satellite, which has circled the Earth every 100 minutes since its launch in 1999. The equipment allowed them to calculate how much mass the world’s 220,000 or so glaciers have lost each year since the turn of the century.

The findings are the latest satellite-based research to point to an accelerating loss of ice in the planet’s cooler regions. Earlier this year, a team led by the University of Leeds in the UK found melting of ice sheets in Antarctica and Greenland was in line with worst-case climate warming scenarios outlined by experts.

Glaciers typically accumulate ice in the winter, but a warming climate means summer melting has outstripped those gains and caused a net loss of ice in mountain regions. The melting in turn contributes to global warming and indirectly accelerates sea level rise, raising the risk of flooding faced by coastal communities.

Meanwhile, the diminishing contribution from glacial run off during Europe’s drier months has made it impossible for industrial barges to cross the Rhine river.