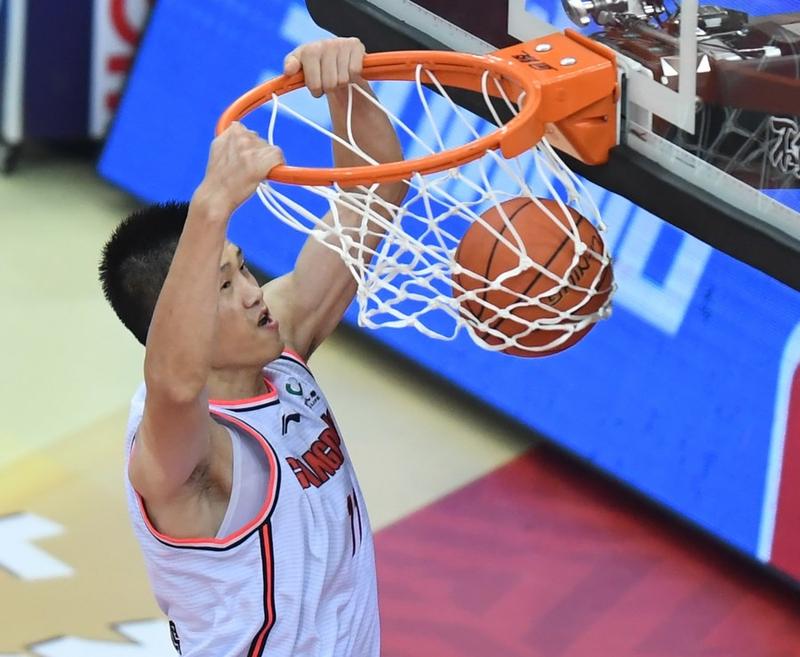 With an 85-80 lead 34 seconds from time, Zhou Peng made one of two free throws as Liaoning resorted to foul tactics. Liu Zhixun made a three to keep Liaoning's hopes alive, but Jason Thompson killed the game with an easy dunk.

Sonny Weems had a game-high 22 points and eight rebounds for Guangdong. Zhou Peng and Zhao Rui contributed 18 and 12 points respectively.

Guo Ailun scored all his 20 points in the second half to lead Liaoning's attack. Kyle Fogg had 18 and Rookie of the Season Zhang Zhenlin added 17 points and nine rebounds.

The match started with overseas players putting on a show as Sonny Weems from the Guangdong Southern Tigers scored the first eight points for Guangdong and Kyle Fogg the first seven for Liaoning Flying Leopards. Both sides struggled to score in the rest of the quarter, which was disrupted by frequent fouls and turnovers, and Guangdong led by a close 17-16

Guangdong coach Du Feng gave a thumb-up to his players on the defensive end, as they limited Liaoning to only 36 percent of shooting.

"I repeatedly emphasized winning the game through defense and the players put up solid defense in this match," he said.

Yi Jianlian, who has been out of action for nearly a year due to a ruptured Achilles tendon, took part in Guangdong's training session earlier this morning, sparking speculation that he may make his season debut in Game 1, but ultimately the star center was not listed on the roster.

The defending champions also came into the match without their starting guard Marshon Brooks, who picked up a similar injury late in the regular season.

The match started with overseas players putting on a show as Weems scored the first eight points for Guangdong and Fogg the first seven for Liaoning. Both sides struggled to score in the rest of the quarter, which was disrupted by frequent fouls and turnovers, and Guangdong led by a close 17-16.

Liaoning's shooters were icy cold in the second quarter, with their All-Star guards Guo and Zhao Jiwei failing to score a single point. Guangdong took the chance to launch a 14-1 run, during which Xu Jie came off the bench to score five in a row.

Trailing 41-29 into the second half, Liaoning rallied with an 11-2 run to cut the deficit to three points, with eight from Guo. Guangdong answered with an 8-2 run, seizing control again at 53-44. Zhang Zhenlin's tip-in in the closing seconds of the third quarter left Liaoning fans roaring, but Zhou made a quick three-point play with three seconds on the clock to consolidate Guangdong's 60-55 lead.

Hu Minxuan's attack one minute into the fourth quarter forced Zhao to commit his fifth personal foul and Liaoning had to send Guo on court for a replacement. The 27-year-old kept attacking the basket, leading Liaoning's comeback effort and putting Guangdong under foul pressure. However, every time Liaoning made it a one-possession game, Zhou stepped up to score for Guangdong.

Guo nailed a three-pointer to close the gap to 78-76 two minutes from time, only to see Weems make a three-point play to enlarge the gap again to 81-76. Despite Liaoning's attempt to catch up, Guangdong maintained the lead to the buzzer and got their title defense off to a good start.

"This match reveals the gap in strength between Guangdong and us," Liaoning coach Yang Ming commented. "Guangdong's players were good in tactical execution and detail handling, and these factors determine the eventual winner in a match like this. We need to learn from them, and personally I have been trying to learn from coach Du."

"It's an intensive match but this is not the end. The games to come will be tougher so we need to keep it going," Zhao Jiwei said.

The two teams will meet again in Game 2 of the best-of-three series on Thursday.