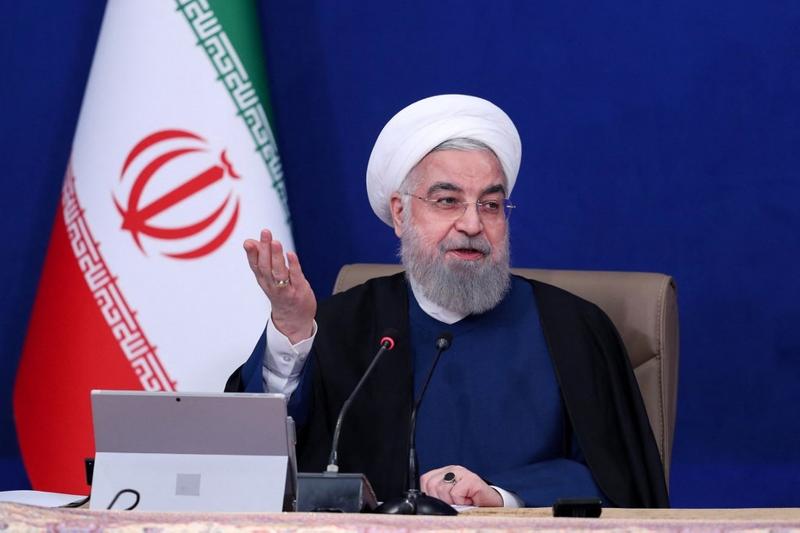 This handout picture provided by the Iranian presidency on April 14, 2021, shows President Hassan Rouhani speaking during a cabinet meeting in the capital Tehran. (IRANIAN PRESIDENCY / AFP)

TEHRAN - Iranian President Hassan Rouhani said on Monday that the economic war waged by the United States against Iran has failed.

"Today, with the resistance of the nation and in line with the guidelines of Iran's supreme leader and the efforts made, the entire world and the United States itself confesses to the defeat in the economic war," Rouhani told a group of economic agents and businessmen, cited by the semi-official Mehr news agency.

Representatives from Iran and the remaining signatories to the Iran nuclear deal, namely Britain, China, France, Russia and Germany, are set to resume talks in the Austrian capital of Vienna on Tuesday

"The Vienna talks show a high level of Iran's power, and today the world has accepted that there is no other way but to reach an agreement with Iran and lift sanctions," he added, referring to the previous nuclear meetings aimed at reviving the 2015 nuclear deal, known as the Joint Comprehensive Plan of Action (JCPOA).

ALSO READ: Iran says will not allow Vienna nuke talks to drag on

Meanwhile, after the beginning of nuclear talks, the world realized that it is possible to hold negotiations with Iran and reach a deal on the basis of dialogue, Rouhani was quoted as saying.

Representatives from Iran and the remaining signatories to the Iran nuclear deal, namely Britain, China, France, Russia and Germany, are set to resume talks in the Austrian capital of Vienna on Tuesday.

Iran gradually stopped implementing parts of its JCPOA commitments from May 2019, one year after former US President Donald Trump's administration unilaterally withdrew from the agreement and re-imposed sanctions on Iran.