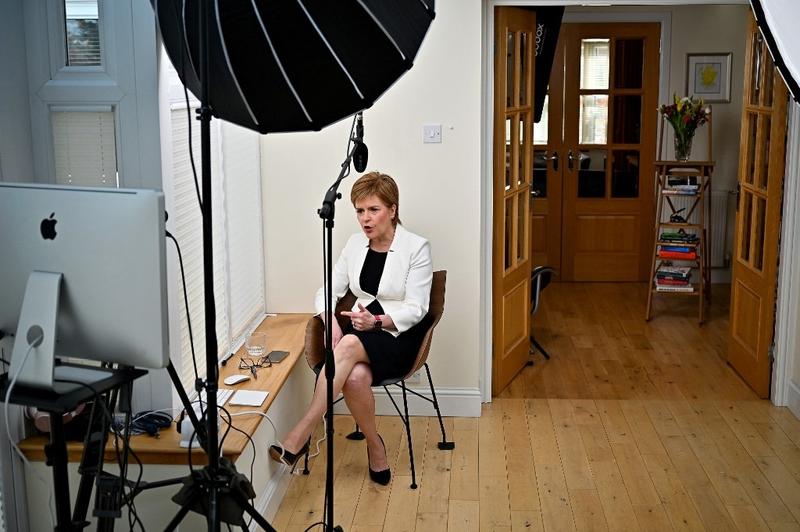 Scotland's First Minister and leader of the Scottish National Party (SNP), Nicola Sturgeon speaks during a remote interview with the BBC's on the Andrew Marr, from Glasgow, Scotland, on April 25, 2021, ahead of the upcoming Scottish Parliament election which is to be held on May 6, 2021. (JEFF J MITCHELL / POOL / AFP)

EDINBURGH - For candidate Angus Robertson, helping his Scottish National Party win a majority in May 6 elections would be a dream come true. Beyond that lies a far bigger prize - another referendum and the prospect of breaking from the United Kingdom.

He only needs to look up for inspiration in his push for independence that would end the 314-year union between Scotland and England and profoundly change the course of British history.

Around the lofty room that serves as his campaign headquarters in Edinburgh, a rallying cry to Scottish noblemen 700 years ago is written in cursive script. It is “not for glory, nor riches, nor honours that we are fighting,” it reads, “but for freedom.”

Opinion polls point to a persistent, though narrowing majority in favour of leaving the UK, with Brexit in 2016 - which Scotland opposed - forefront in many voters’ minds

The prospect of independence is again in play.

Opinion polls point to a persistent, though narrowing majority in favour of leaving the UK, with Brexit in 2016 - which Scotland opposed - forefront in many voters’ minds.

The SNP is also close to controlling the devolved parliament outright, and the last time that happened in 2011, Britain’s then-Prime Minister David Cameron bowed to pressure and allowed a referendum in 2014 that ultimately rejected going it alone.

Robertson hopes that a majority would force Boris Johnson to do the same, and few races will be watched more closely than his own to gauge the SNP’s chances and, with them, the possibility of another referendum.

The Scottish Conservatives hold the seat by just 610 votes, and the SNP needs four more seats to win a majority of 65 in the 129-seat parliament and claim the moral and political right to vote on independence.

“Edinburgh Central is a hugely important seat for the SNP to secure a majority,” said Robertson of his symbolic constituency at the heart of Scotland’s capital.

He grew up in the area that includes the Scottish parliament, an imposing castle perched on an extinct volcano and the richest parts of a city that voted emphatically against independence in 2014.

The 51-year-old, who talks about independence with the quiet intensity of someone who thinks it’s a question of when, not if, recalled a time when nationalists like himself weren’t even elected as local councillors.

“The fact that the SNP is in the running to win this seat is hugely symbolic of how strong the pro-independence movement has become.”

Were independence to happen, the United Kingdom - already grappling with the economic impact of the COVID-19 pandemic and Brexit - would lose about a third of its landmass, a tenth of its population and a core ingredient of its identity.

The row has cast an unflattering light on the nationalist movement, tainted by in-fighting, self-interest, and conspiracy

Opinion polls suggest that, for the first time, a small, sustained majority of voters in Scotland favour it.

Anger over Brexit and approval of the Scottish government’s handling of the coronavirus pandemic have bolstered support for independence, and demands for a second vote. That backing reached a record 58 percent of Scots at the end of last year.

But underlining the challenge the SNP faces, support for independence has since dropped to 51 percent, excluding undecided voters, following a bitter feud between SNP leader and Scotland’s first minister, Nicola Sturgeon, and her predecessor, Alex Salmond.

Sturgeon has faced calls to resign for her treatment of her former mentor during an investigation of sexual harassment allegations against him.

Salmond was acquitted by a court last year of 12 allegations of sexual assault and is suing the government over its handling of the complaints.

The row has cast an unflattering light on the nationalist movement, tainted by in-fighting, self-interest, and conspiracy.

Salmond started his own pro-independence party in March. Although the party, Alba, is expected at most to pick up a handful of seats, this could split the nationalist vote and deny the SNP its crucial outright majority.

While the SNP is one of Europe’s most successful political parties and is on course to win a fourth term in office, its membership is the most divided it has been in decades, according to James Mitchell, a professor of politics at Edinburgh University, who has written books on the nationalist movement.

He said among activists there is growing frustration over Sturgeon’s gradualist strategy for winning a new referendum and her centrist economic policies.

A party that wins elections “tends to be happy”, he said.

“But the SNP has a bigger goal and that is independence. It hasn’t made much progress on that and this is feeding a sense of betrayal. That is a strong term, but that is how some people feel.”

THE FIGHT FOR EDINBURGH

In a close-fought constituency like Edinburgh Central, said Mitchell, disaffection with the SNP could divert votes to other pro-independence candidates and rob the SNP of a precious seat.

Repeatedly besieged by English soldiers during the Middle Ages, Edinburgh has proved more resistant to independence than other parts of Scotland.

It has the highest average earnings of any city in the United Kingdom after London. Many residents work in finance and higher education, which could be threatened by independence.

About 60,000 people live in Edinburgh Central.

A railway line bisects its richer areas, with their leafy Georgian squares and shops selling artisanal coffee or pheasant, from working-class areas where Polish, African and South Asian supermarkets serve a diverse community.

Robertson was born in England to a Scottish father and German mother, and started out as a journalist with Austria’s public broadcaster. He is a prominent ally of Sturgeon and a former deputy leader of the SNP.

When Reuters visited, Robertson’s mail bag contained a crude reminder that Edinburgh Central is no walkover. He opened an envelope and unfolded a note scrawled with expletives. “As I thought,” he said.

Robertson’s Conservative opponent, a relative unknown called Scott Douglas, who works in public relations for a local college, was born in England to Scottish parents.

“Most people I speak to don’t see the difference between being British and Scottish,” he told Reuters. “You can be both.”

Under pressure to show progress is being made towards the goal of independence, the nationalists have pledged to hold a new referendum by the end of 2023 if they win a majority in the election. As the law stands, to hold another referendum legally, Scotland needs the permission of the British parliament.

Johnson has repeatedly said he would refuse another independence vote and the next should not be held until the 2050s because the issue was settled in 2014.

This could set the stage for a showdown: the nationalists say they will pass the legislation anyway, daring the British government to challenge the decision in the courts.

But Robertson says the UK government will eventually back down if the SNP wins a majority.

“The danger to Boris Johnson and the UK government, by blocking the legitimate wishes of people in Scotland, is that what has been an independence movement develops into a democracy movement,” Robertson said. “This is understood by ministers in London.”

On Edinburgh’s streets below the castle there is suspicion of both the SNP and Johnson’s Conservatives.

Johnson is particularly disliked in Scotland, where his English eccentricity is seen by some as arrogance. He is unlikely to campaign for the Conservatives, in apparent recognition that his presence could do more harm than good.

“Boris doesn’t care about a guy like me,” said Stephen McKinlay, relaxing on a bench after a day working on a building site.

McKinlay said he voted against independence in the 2014 referendum, but is now leaning the opposite way.

“There are big risks,” he said, “but maybe now we will be better off on our own.”