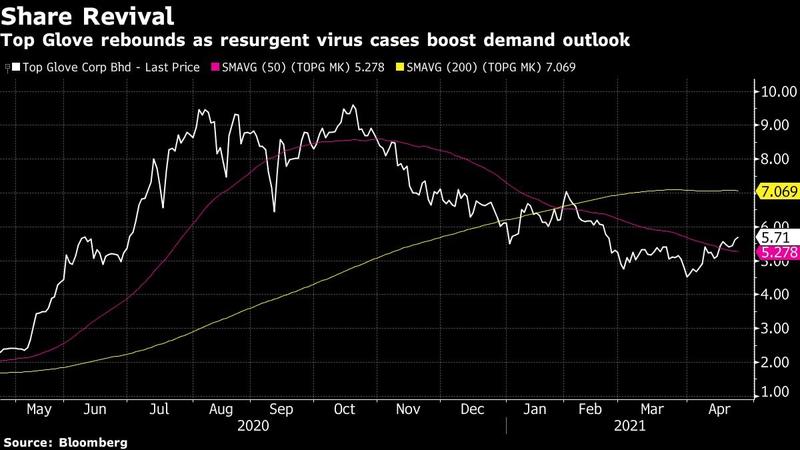 Shares of the world’s largest rubber glove maker rose to a two-month high after the company cut its share sale in Hong Kong by nearly half of its earlier target, a move analysts said will minimize earnings dilution.

Top Glove will issue up to 793.5 million shares, down from 1.49 billion announced in February, it said in a filing on Thursday. The firm's shares climbed as much as 2.5% in Kuala Lumpur Friday, the highest since Feb 23

Top Glove Corp. climbed as much as 2.5 percent in Kuala Lumpur Friday, the highest since Feb 23. The company, whose shares also trade in Singapore, will issue up to 793.5 million shares, down from 1.49 billion announced in February, it said in a filing on Thursday. The fundraising target stands reduced to 4.22 billion ringgit (US$1 billion) from 7.77 billion ringgit previously, according to the filing.

“We believe this move will be taken positively by investors,” Megat Fais, an analyst at Citigroup Inc., said in a report. “Whilst the HK listing was made known a while ago, the quantum of the fundraising surprised negatively especially considering the supercycle that the gloves sector is currently undergoing.”

A resurgence in COVID-19 cases in some parts of the world is improving the outlook for producers of medical gloves. Top Glove’s shares are up 26 percent this month and were among the top gainers on Malaysia’s main index on Thursday along with peers Supermax Corp. and Hartalega Holdings Bhd.

Top Glove, which is seeking a listing in Hong Kong to bolster its profile with overseas investors, was one of Asia’s hottest pandemic trades for 2020 before the rollouts of vaccines around the world dimmed their appeal.

Pressure on the company deepened in late March when the US Customs and Border Protection ordered personnel at US ports of entry to seize gloves made in Malaysia over allegations of forced labor. Top Glove earlier this month said it is working with the US authorities to resolve the issues to help lift the ban.

Top Glove in February said the Hong Kong exchange listing will allow direct participation by new private and institutional investors in North Asia. The reduction in the issuance will minimize dilution to existing shareholders, according to the filing Thursday.