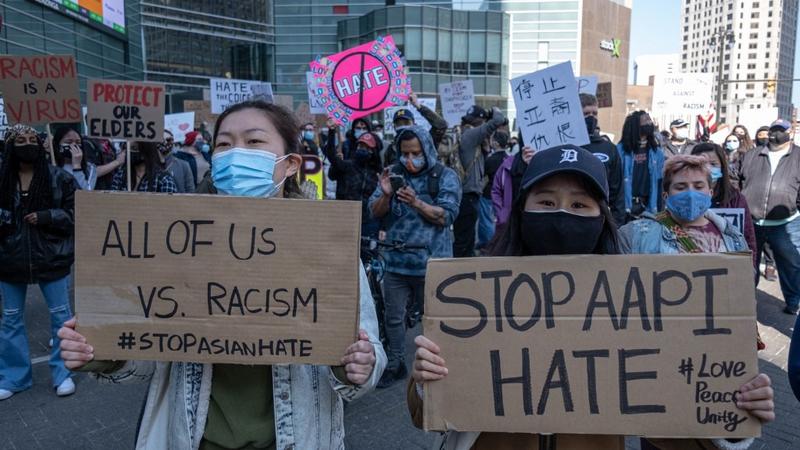 People march during a "Stop Asian Hate" rally in downtown Detroit, Michigan, on March 27, 2021, as part of a nationwide protest in solidarity against hate crimes directed towards Asian Americans in the wake of the Atlanta spa shootings. (SETH HERALD / AFP)

WASHINGTON - The US Senate on Thursday voted overwhelmingly to pass a bill combating surging hate crimes against Asian Americans during the COVID-19 pandemic.

The Senate approved the bill in a 94-1 vote and sent it to the House, which will soon take up their version of the legislation. The lone nay vote was cast by Missouri GOP senator Josh Hawley.

The Senate approved the bill in a 94-1 vote and sent it to the House, which will soon take up their version of the legislation. The lone nay vote was cast by Missouri GOP senator Josh Hawley

"By passing this bill we say to the Asian American community that the government is paying attention to them, has heard their concerns and will respond to protect them," said Senate Majority Leader Chuck Schumer, Democrat from New York, where anti-Asian violence has especially been running high.

ALSO READ: Political barbs fuel hostility against Asians in US

The bill also directs the DOJ and the Department of Health and Human Services to issue guidance raising awareness of hate crimes amid the pandemic, and work with other agencies to establish an online platform for reporting those crimes.

Hirono said that the bill's passage "sends a clear and unmistakable message of solidarity" to the Asian American and Pacific Islander community.

The bill gained momentum after six women of Asian descent were killed in mass shootings in the Atlanta area in March.

Senators locked in a final deal on the bill late Wednesday night, allowing for several GOP-proposed amendments to get a vote. All of those changes would need 60 votes in favor in the now evenly-divided Senate, and it turned out none of them got added.

Susan Collins, GOP senator from Maine who managed to work with Hirono to change the language of the bill over the administration's guidance, said that with the passage of the bill, "we can send an unmistakably strong signal that crimes targeting Asian Americans and Pacific Islanders in our country will not be tolerated."