Xinjiang cotton: Who the real victims are 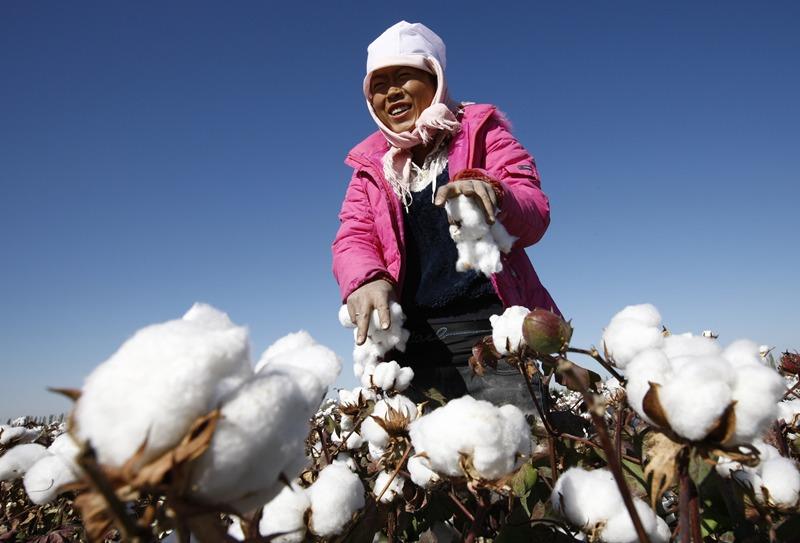 A farmer picks cotton in a field in Hami, Xinjiang Uygur autonomous region, in the fall of 2020. (PILATES / FOR CHINADAILY.COM.CN)

The real victims of the false accusations of “forced labor” in Xinjiang Uygur autonomous region are the large number of vulnerable cotton growers and textile workers, said industry officials.

Many of the workers in the cotton and textile industry, particularly those from less developed southern Xinjiang, have just escaped from poverty as the labor-intensive textile industry has thrived in the region in recent years, the officials said over the weekend.

I often wonder how an organization from a country (BCI) that doesn't produce cotton can draft standards for cotton. So maybe it's never been about certifying quality cotton but about controlling cotton resources

"We're considering laying off some workers because of poor sales of cotton yarn after some big international retail brands have chosen not to source cotton and yarn from Xinjiang over the so-called forced labor concerns," said a human resource officer with a cotton yarn factory near Korla, in southern Xinjiang's Bayingolin Mongol autonomous prefecture.

The chain of effects is obvious and happening now, said the officer, who would give only his surname, Ma."The suppliers of the retail brands no longer place orders with us. We then have to reduce production, which means many workers will be laid off," he said, adding that most of the workers are from rural areas.

"Also, factories like ours will purchase less cotton, which will cause the price of cotton to fall. Then the cotton farmers will suffer," he added.

Ma's factory is located in Tarim Basin, one of the largest cotton growing areas in China. Xinjiang manufactures more than 5 million metric tons of cotton annually－about 80 percent of the nation's total production. By the end of 2019, there were 808 cotton processing companies in Xinjiang, accounting for 84 percent of the country's total, according to the China Cotton Association.

The cotton textile industry has created jobs for more than 600,000 local people in Xinjiang. More than 50 percent of farmers in Xinjiang grow cotton, and over 70 percent of these farmers are members of ethnic minority groups including the Uygur, Kazak and Uzbek in southern Xinjiang. About 80 percent of their income comes from growing cotton, the association said.

"Such wrong acts (of excluding Xinjiang cotton and associated products from the supply chain) harm the legitimate rights of local farmers and workers who are entitled to improve their living standards by hard work," it said in a statement.

"It actually harms the human rights of Xinjiang people in the name of supply chain compliance," the association said.

Over the weekend, the Chinese public has continued voicing outrage on social media or in some cases staged protests starting on Wednesday after finding out that some big international retail brands, including H&M and Nike, had once issued statements saying they wouldn't work with any Xinjiang garment manufacturing factories, nor would they source cotton from the region.

The companies claimed that they were concerned about some Western media reports of "forced labor" in the region－an accusation that the Chinese central and local governments, as well as industry officials and local farmers in Xinjiang, have rebutted as groundless.

Dozens of Chinese entertainment stars have declared they would end commercial ties with the brands involved, and the products of some brands have been pulled off large online Chinese shopping platforms.

Ma said the biggest blow for Xinjiang's cotton and textile industry is yet to come. "We're still manufacturing with the cotton picked in 2018 and 2019. All we need to do now is to find new buyers," he said."But the situation will become more complicated and difficult for us and cotton growers in the next couple of years if the region's cotton and textile industry remains a target."

Ma said his factory received many inspections from national and local labor protection bodies in 2020 after some Western countries, especially the United States, constantly accused the region of using "forced labor". But no irregularity has been found.

"At first I thought the claim is only about politics, but now it has become clearer than ever that it was just their first step. Their true intention, to curb Xinjiang's development, has now been fully revealed," Ma said.

"The whole thing must be carefully orchestrated because they know how important the cotton and textile industry is to Xinjiang and how many people would be affected." 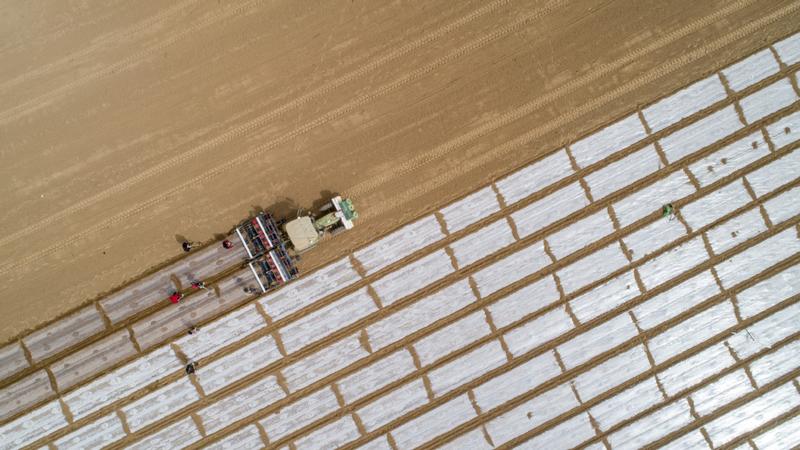 The companies that issued the statements about putting a halt to sourcing cotton from Xinjiang were members of the Better Cotton Initiative, a Switzerland-based organization. On March 30 last year, the initiative announced that it would suspend business with licensed growers in Xinjiang during the 2020-21 cotton season over allegations of forced labor, which means that growers in the region were no longer able to get certificates from BCI and enter the global supply chain.

Xinjiang Haoxing Cotton and Linen Co in Bole, in the region's Bortala Mongolian autonomous prefecture, joined the initiative in 2013. Because the BCI suspended its cooperation, the sales of ginned cotton were heavily affected in 2020, Gao Ruinan, sales manager of the company, told Southern Weekly.

Because many of its clients involved in international trade did not want to be associated with cotton supplies from Xinjiang, by the end of December, the company had managed to sell only about 2 million metric tons of ginned cotton since the harvest season started, which was only about half of the amount it normally sold during that period in previous years, said Gao, whose company owns eight cotton farms.

Cao Huiqing, head of the cotton cultivation branch of the China Cotton Association, said the BCI's requirements for ethical cotton are actually pretty low. "For example, it bans the use of certain pesticides that were prohibited in Xinjiang about more than 30 years ago," he said.

Cotton growers in Xinjiang have all joined the Stockholm Convention－a global treaty that took effect in 2004 to protect human health and the environment from pollutants. Its requirements for growing cotton are higher than those of the BCI. Also, the initiative's requirements for decent working conditions are all included in China's labor laws, he added.

"I often wonder how an organization from a country that doesn't produce cotton can draft standards for cotton. So maybe it's never been about certifying quality cotton but about controlling cotton resources," Cao said.

Some officials have said it seems that the BCI's headquarters in Switzerland is turning a blind eye to reports submitted by its China branch. The organization's office in Shanghai issued a statement on Friday, reiterating that it had found "not a single case of forced labor" in third-party verifications in Xinjiang since 2012. However, the BCI's head office hasn't made any changes in its previous decision to cut ties with Xinjiang growers.

Wu Yan, head of the initiative's Shanghai office, said her team conducted careful inspections in Xinjiang after the accusations of "forced labor", but found no such practice.

"We've submitted two investigation reports to our headquarters, and also submitted reports we compiled from some third parties such as SGS (a Swiss multinational company that provides inspection, verification, testing and certification services)," she said in a China Central Television interview broadcast on Saturday evening.

"We've reiterated many times to some international NGOs and stakeholders that we haven't found a single case of forced labor in China."

Wu said the decision by BCI headquarters to cut ties with Xinjiang growers will block about 500,000 tons of Xinjiang cotton from entering the international supply chain.

Liu Haoran, a project manager with the BCI Shanghai office, said many international human rights groups have played a role in the initiative's decision.

"They've demanded that BCI suspend Xinjiang cotton certification, and required that the BCI not publicly associate its decision with these human rights groups," he said in the CCTV interview.

In addition, the United States Agency for International Development is a key sponsor of the BCI. The organization also heavily relies on membership fees paid by big US and European companies, according to the report.

If the CIA should want to destabilize China, the best way to do it is to create unrest and join with those Uygurs in pushing the Han Chinese in Beijing, Lawrence Wilkerson, chief of staff of former US secretary of state Colin Powell, said in a public speech

The cotton industry matters to people's livelihoods, employment and trade in Xinjiang, so it plays an irreplaceable role in safeguarding the region's stability and even national unity. So China needs to be vigilant in regard to the real intention of such a "precision strike" against Xinjiang cotton, said Mei Xinyu, a researcher at the Chinese Academy of International Trade and Economic Cooperation.

"Large exports of Xinjiang cotton, and many foreign enterprises' participation in the downstream portions of production lines such as clothing manufacturing and retail sales, provide opportunities for anti-China forces to apply downstream pressure," Mei said in a post on Sina Weibo on Friday.

China must take action to prevent a possible chain reaction triggered by the cotton issue, which is created by anti-China forces in Western countries, particularly the US, to ensure that the country's overall economic development won't be affected, he added.

Over the weekend, a video of Lawrence Wilkerson, chief of staff of former US secretary of state Colin Powell, went viral on Chinese social media platforms. In the video, shot in August 2018, Wilkerson publicly suggested that the US Central Intelligence Agency exploit the Uygurs to cause unrest in China.

If the CIA should want to destabilize China, the best way to do it is to create unrest and join with those Uygurs in pushing the Han Chinese in Beijing, Wilkerson said in a public speech.

Shenzhen Ningnanshan, a popular blogger on China's economic issues, released a post over the weekend on various Chinese social media platforms, saying that what the US and other Western countries are doing is to bar the Uygurs from modern industrial civilization so Xinjiang will be less developed. As a result, unrest could resurface in the region, he said.

The region has been China's main battlefield against terrorism. For a time, it was hit by frequent terrorist attacks, particularly after the penetration of religious extremism from abroad. Many experts think that poor education and the low employment rate in rural Xinjiang contributed to the quick spread of religious extremism. Thanks to joint efforts, no terrorist incident has happened in Xinjiang for more than four years.

"The US and other Western countries cannot stand seeing Xinjiang prosper because it means that they cannot attack China with the 'Xinjiang card' anymore. Obviously, targeting Xinjiang cotton can create bigger damage to China than targeting certain high-tech companies," said the blogger, who has more than 667,800 followers on Sina Weibo.