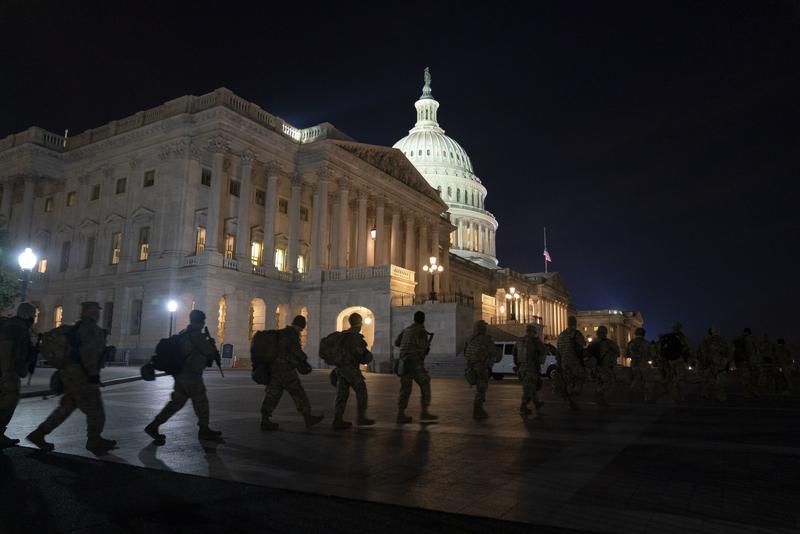 Members of the National Guard walk in front of the US Capitol at night ahead of the 59th Inaugural Ceremonies in Washington, DC, US on January 18, 2021. (STEFANI REYNOLDS / BLOOMBERG)

President-elect Joe Biden is set to arrive in Washington on Tuesday, the eve of his inauguration, with the usual backdrop of celebrations and political comity replaced by a military lockdown.

Biden will spend the night at Blair House, the guest residence across the street from the White House -- one of just a few traditions being honored during the most extraordinary transfer of power in most Americans’ lifetimes.

Outgoing President Donald Trump doesn’t plan to invite the Bidens to the White House before the inauguration -- denying them the customary gesture of goodwill the Obama family afforded him four years ago. Trump will also become the first president since Andrew Johnson to skip his successor’s swearing in -- he’ll instead leave Washington Wednesday morning for Florida, where he plans to reside.

Roughly 25,000 National Guard soldiers have been deployed across Washington after Trump supporters, incited by the president to stop Congress from certifying Biden’s election victory, stormed the US Capitol in a violent riot on January 6 that left five dead. Tall fencing now surrounds the Capitol building and the White House.

Even before the insurrection, the raging coronavirus pandemic -- which has killed nearly 400,000 in the US -- had already forestalled the possibility of large-scale gatherings or public festivities for Biden and Vice President-elect Kamala Harris’s inauguration.

But the scene of Wednesday’s transfer of power will be like none other in American history, a stark illustration of the deep political divisions plaguing the nation that Biden will inherit.

“Sometimes ‘unprecedented’ is a fair word to use, certainly in a moment defined by crises in an extreme way,” said Julian Zelizer, a political historian at Princeton University. “It’s the pandemic and then a post 9-11 moment combined. That’s why the moment is so grim.”

Biden has had a front-row seat for the past three inaugurations as Barack Obama’s vice president. He attended Trump’s 2017 ceremony as part of a peaceful transfer of power despite their stark differences.

Biden campaigned on healing the nation’s rifts. He’s said that he was spurred to run a third time for president after a 2017 white supremacist rally in Charlottesville, Virginia, erupted in violence, leaving one person dead. Trump said there were “very fine people” on both sides of the conflict.

But healing the nation will be a tall order.

Threats to Biden’s security prompted him to scrap his plan to travel to Washington on an Amtrak train -- the same way he commuted between his Delaware home and the Capitol throughout his nearly four-decade career in the Senate.

Meanwhile, a pending Senate trial for Trump’s unprecedented second impeachment -- for his role in inciting the January 6 violence -- hangs over Washington and threatens to complicate Biden’s aspirations to move swiftly past the antagonism and rancor that characterized Trump’s presidency.

But Andrew Feldman, a Democratic strategist, said the lack of festivities at Biden’s inauguration means the focus will immediately shift to his agenda, even as the Senate proceeds with the impeachment trial.

“We have to stay focused on the Biden agenda and what the American people are demanding get done,” Feldman said. “If we don’t, not only will the country continue to struggle to recover, it will also be hard from a political perspective for Democrats to survive and gain in the midterms.”

Democrats will have to defend narrow majorities in both the House and Senate in 2022. Incumbent presidents typically lose seats in Congress in their first midterm elections, as Trump did in 2018.

Feldman said that makes it incumbent on Biden to immediately enact legislation the majority of Americans support, including measures to rein in the pandemic, resurrect the economy and address systemic economic and racial inequalities.

Within his first week in office, Biden is expected to ask Congress to pass a $1.9 trillion stimulus and issue scores of executive orders to both reverse Trump policies and advance his own, including one that would require Americans to wear masks on federal property and in the course of interstate commerce.

Obama’s longtime pollster Joel Benenson said Wednesday’s scenes of Biden reciting the oath of office before an empty National Mall, in a city fortified against a repeat of the Jan 6. violence, will help the new president advance his agenda.

“It will be a combination of the images and the commentary that they’re hearing,” Benenson said. “It was shocking. It was jarring. Americans will be looking to see Washington move on.”