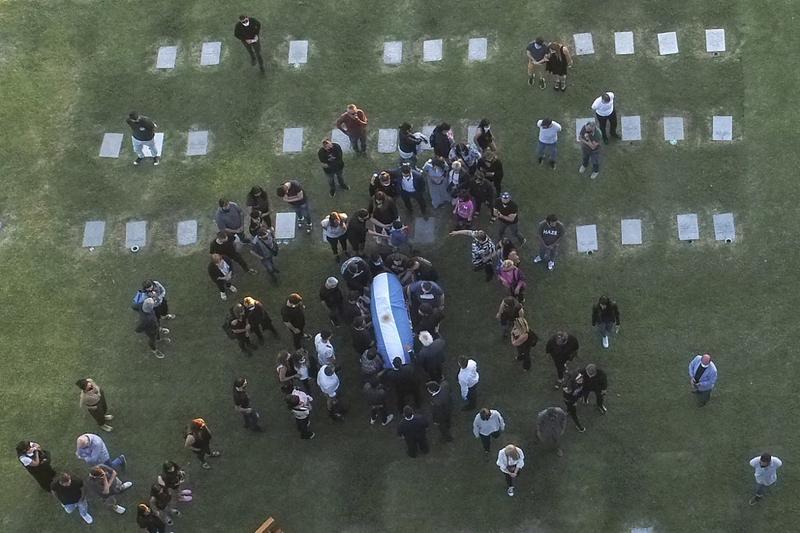 Aerial view of the burrial of late Argentine football legend Diego Armando Maradona as his family and friens carry the coffin with his remains at the Jardin Bella Vista cemetery, in Buenos Aires province, on Nov 26, 2020. (EMILIANO LASALVIA / AFP)

BUENOS AIRES - Argentina’s Diego Maradona, one of the world’s greatest ever soccer players, was buried on Thursday amid a global outpouring of grief from the streets of Buenos Aires to Naples in Italy.

The death of Maradonaat the age of 60 on Wednesday, following a heart attack, has sparked both mourning and celebrations of a true sporting star, who was a genius on the soccer field but lived a life marred by struggles with addiction.

In a day of high emotion, the World Cup winner was taken by hearse late on Thursday to the Bella Vista cemetery on the outskirts of Buenos Aires - where his parents are also interred - for an small private ceremony of his family and close friends.

Thousands of Argentines lined the roads as the procession passed on the hour-long journey from the presidential palace in central Buenos Aires, where Maradona had lain in state during the day.

Earlier, there were clashes between police and fans and a febrile atmosphere more akin to a rowdy soccer game than a wake, with fans clambering up the palace gates to get as close as possible to their hero.

In Italy, crowds tied hundreds of blue and white scarfs to the railings outside his former club Napoli, while in France, sports paper L’Equipe’s front page blared out: “God is dead”.

In Argentina, three days of national mourning were called for the player who led the country to a 1986 World Cup win and is revered with cult-like status. Tens of thousands took to the streets, not all wearing masks, despite fears over the COVID-19 pandemic. Some left flowers and messages at his childhood home.

“Maradona for me is the greatest thing that happened to me in life. I love him as much as my father and it’s like my old man died,” Cristian Montelli, 22, a supporter of the star’s former club Boca Juniors said with tears in his eyes after he had filed past the coffin.

“If I die young, hopefully upstairs I can play ball and watch a Boca game with him,” added Montelli, who had a tattoo of Maradona’s face on his leg. 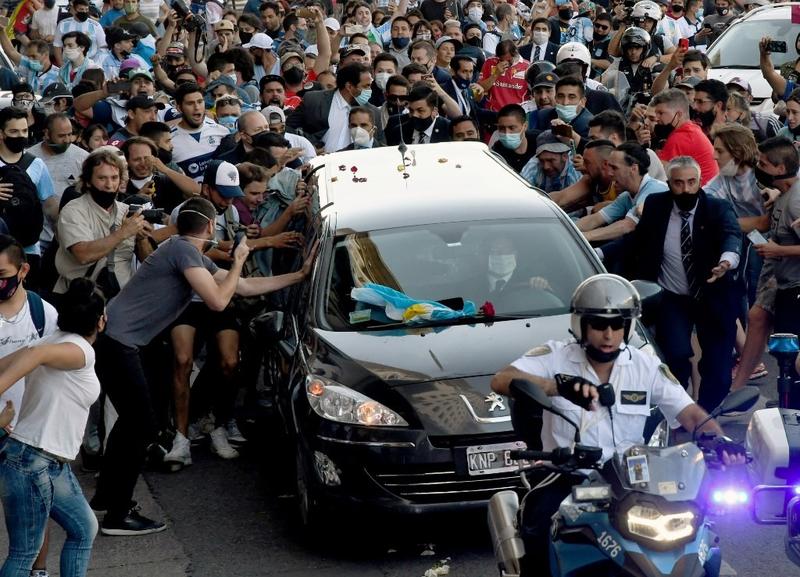 Photo released by Telam showing fans crowding next to the hearse carrying the late Argentine football legend Diego Armando Maradona on its way from Casa Rosada presidential palace to the cemetery, in Buenos Aires, on Nov 26, 2020. (RAUL FERRARI / TELAM / AFP)

During the day, Maradona’s body lay in state in a closed casket at the Casa Rosada presidential palace on the central Plaza de Mayo. It was covered with the blue and white national flag and an Argentina soccer jersey with the number 10 that had been part of his nickname “D10S” - a play on “dios”, the Spanish word for God.

Starting at dawn on Thursday, thousands of fans had formed a snaking line estimated at over a 1.6 km long through the streets of Buenos Aires near the plaza, after a night of mourning and reminiscing.

Fans who got inside the palace - many missed out - threw soccer shirts, flowers and other items towards the casket.

“He was someone who touched the sky with his hands but never took his feet off the ground,” President Alberto Fernandez said. He visited the casket on Thursday.

As authorities started to close down access to the central square on Thursday afternoon, scuffles broke out, with police using rubber bullets and water cannon to disperse the unruly crowds.

The tensions eased after Maradona’s body was transferred to the cemetery, surrounded by a huge procession of police and others on motorbikes and cars.

In Naples, meanwhile, fans laid out flowers, children’s pictures, candles and even a bottle of wine in a rapidly expanding, makeshift shrine. 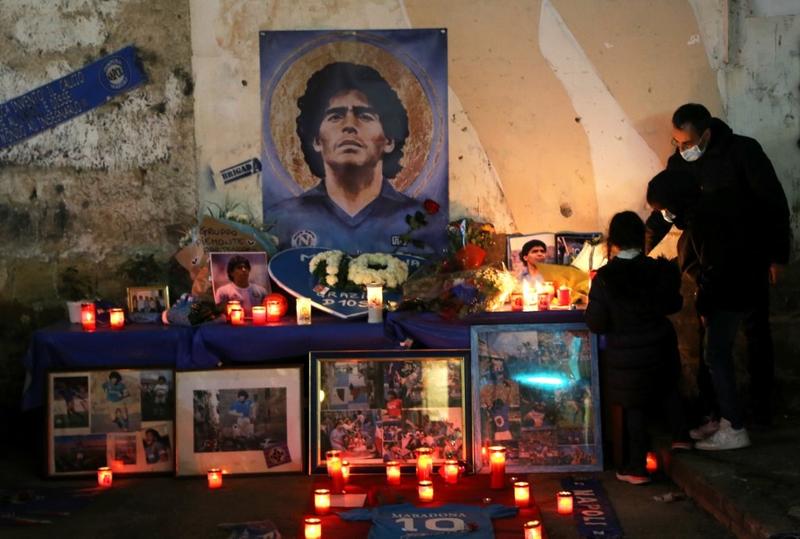 People light candles as they to mourn the death of Argentinian football legend Diego Maradona, on Nov 26, 2020 at a makeshift altar set up in the Quartieri Spagnoli of Naples. (CARLO HERMANN / AFP)

'Diego belongs to the people'

Major athletes and world leaders, including Argentina-born Pope Francis, have paid their own tributes.

Beloved in his homeland after leading Argentina to World Cup glory in 1986 and adored in Italy for taking Napoli to two Serie A titles, Maradona was a uniquely gifted player who rose from the tough streets of Buenos Aires to reach the pinnacle of his sport.

The 1986 World Cup included a quarter-final game against England where Maradona scored two of the tournament’s best-known goals ever - an illicit “Hand of God” goal and one that followed an incredible swerving, dribble.

Maradona also battled various health problems over the years as a result of his addictions. Earlier this month, he was hospitalized for symptoms including anemia and dehydration and underwent emergency surgery for a subdural hematoma - a blood clot in the brain. 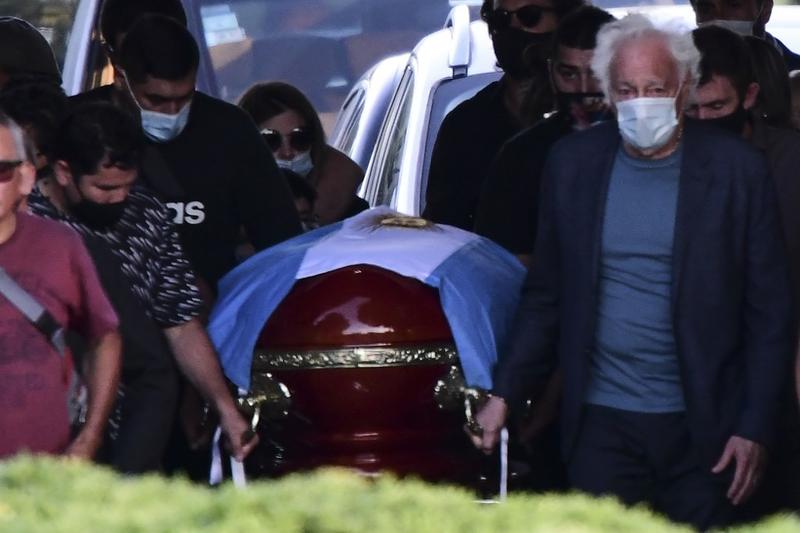 The coffin with the remains of late Argentine football legend Diego Armando Maradona is carried by his family and friends at the Jardin Bella Vista cemetery, in Buenos Aires province, on Nov 26, 2020. (RONALDO SCHEMIDT / AFP)

On Thursday, Maradona’s lawyer, Matías Morla, said he would ask for a full investigation into the circumstances of the death, and criticized what he said was a slow response by emergency services.

In Italy, Massimo Vignati, owner of a Maradona museum in Naples, said the player had become almost like family.

“My mother was the Neapolitan mother of Maradona. He was our twelfth brother,” he told Reuters, surrounded my memorabilia of the player. “We must remember him with his smile as always. He made his last dribble and left us suddenly.”