Deep-freeze hurdle makes Pfizer’s vaccine one for the rich 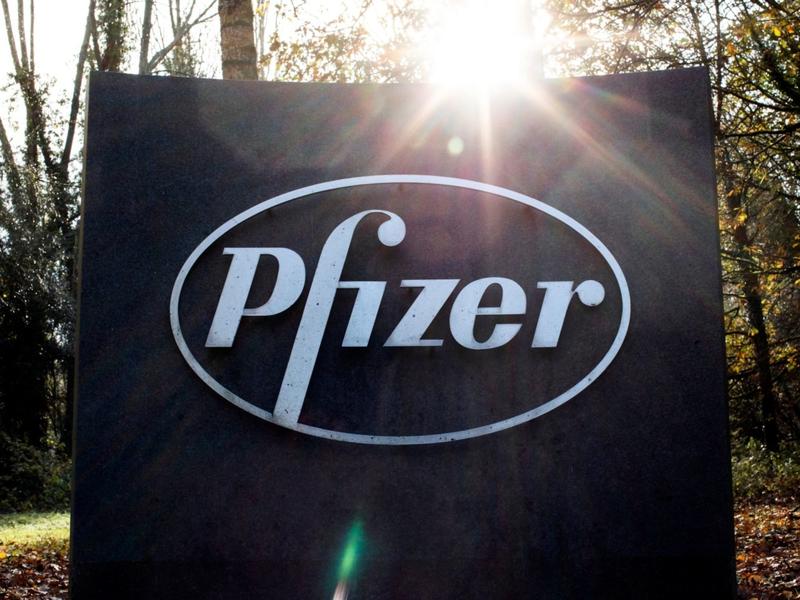 When Pfizer Inc and BioNTech SE’s Covid-19 vaccine rolls off production lines, Shanghai Fosun Pharmaceutical Group Co will be waiting to distribute it through a complex and costly system of deep-freeze airport warehouses, refrigerated vehicles and inoculation points across China.

After they reach vaccination centers, the shots must be thawed from -70 degrees celsius and injected within five days, if not they go bad.

Then the herculean journey from warehouse freezer to rolled-up sleeve must be undertaken all over again -- to deliver the second booster shot a month later.

The roadmap sketched out by the company, which has licensed the vaccine for China, offers a glimpse into the enormous and daunting logistical challenges faced by those looking to deliver Pfizer’s experimental vaccine after it showed “extraordinary” early results from final stage trials, raising hopes of a potential end to the nearly year-long pandemic.

That euphoria is now being diluted by the realization that no currently used vaccine has ever been made from the messenger RNA technology deployed in Pfizer’s shot, which instructs the human body to produce proteins that then develop protective antibodies.

That means that countries will need to build from scratch the deep-freeze production, storage and transportation networks needed for the vaccine to survive. The massive investment and coordination required all but ensures that only rich nations are guaranteed access -- and even then perhaps only their urban populations.

“Its production is costly, its component is unstable, it also requires cold-chain transportation and has a short shelf life,” said Ding Sheng, director of the Beijing-based Global Health Drug Discovery Institute, which has received funding from the Bill & Melinda Gates Foundation. 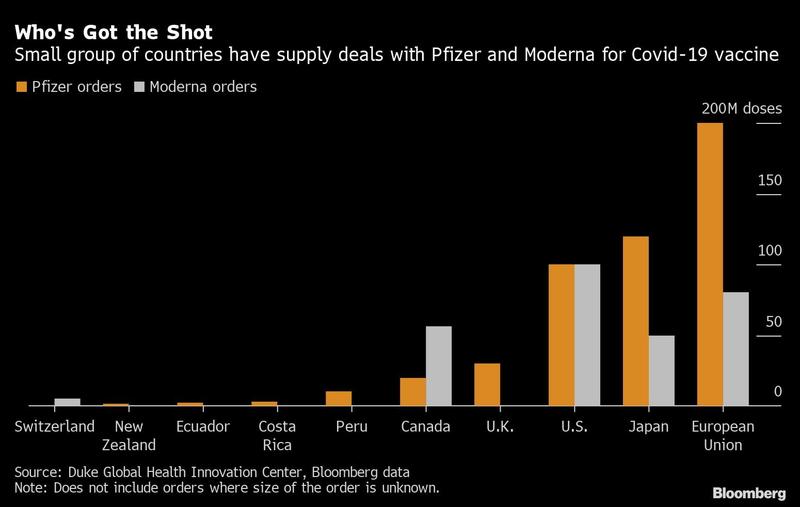 Who's Got the Shot

The expense of deploying the Pfizer shot will likely heighten existing fears that wealthier nations will get the best vaccines first, despite a World Health Organization-backed effort called Covax that aims to raise $18 billion to purchase vaccines for poorer countries.

It also presents a choice now faced across the developing world: to pay for the expensive construction of subzero cold-chain infrastructure for what seems like a sure bet, or wait for a slower, more conventional vaccine that brews batches of protein or inactivated viral particles in living cells, and can be delivered through existing health-care networks.

“If there is a protein-based vaccine that could achieve the same effect as an mRNA vaccine does and there’s the need to vaccinate billions of people every year, I’d go for the protein-based shots in the long run,” Ding said.

Even for rich countries that have pre-ordered doses, including Japan, the US and the UK, delivering Pfizer’s vaccine will involve considerable hurdles as long as trucks break down, electricity cuts out, essential workers get sick and ice melts. 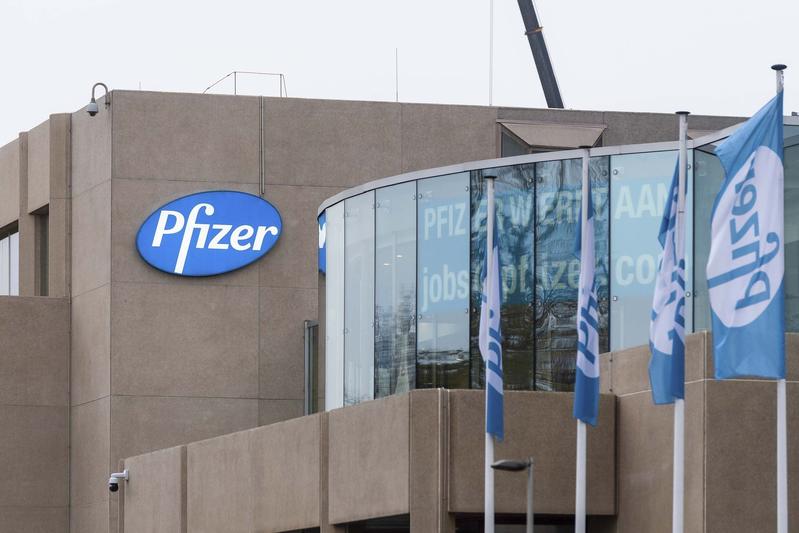 A poster in the window of the Pfizer Pharmaceutical Company of Puurs, visible from the highway, lets motorists know that the company is hiring staff on November 10, 2020 in Puurs, Belgium. (JEAN-CHRISTOPHE GUILLAUME / GETTY IMAGES / BLOOMBERG)

To safely deliver shots in Chinese mainland and Hong Kong, Fosun will partner with the state-owned Sinopharm Group Co, a pharmaceutical distributor with well-established networks across the country. One of Sinopharm’s subsidiaries has also been developing Covid-19 vaccines.

Packed into cold storage trucks, those vials will arrive at inoculation sites where they can thaw and be stacked in fridges at 2 to 8 degrees celsius for a maximum five days before going bad.

“The requirement for extremely cold temperatures is likely to cause spoilage of a lot of vaccine,” said Michael Kinch, a vaccine specialist at Washington University in St. Louis.

It’s also likely to cost Fosun tens of millions yuan, according to the company’s Chairman Wu Yifang. Fosun is considering importing the vaccine in bulk and filling them into vials at a local plant. That will also require further investment in production and storage.

The resulting price tag may be too hefty for many developing nations, including neighboring India, which has struggled to contain the world’s second-largest coronavius outbreak and currently has no agreement to purchase the Pfizer vaccine.

Many working in the country’s public health and the pharmaceutical industry have already voiced concern that India lacks the necessary capacity and capability to deliver a vaccine across its vast rural hinterland and population of over 1.3 billion people at the breakneck speed now expected.

“Most of these vaccines need minus 70 degrees, which we just can’t do in India, just forget it,” said T. Sundararaman, a New Delhi-based global coordinator of the People’s Health Movement, an organization that brings together local activists, academics and civil society groups working on public health.

“Our current cold chains are not able to cope with some districts’ need for measles vaccines, and that’s only for children below the age of 3,” he said. “That’s a really trivial number of people compared to the numbers that will need a Covid-19 vaccine.”

When asked at a Tuesday briefing if India’s government would look to buy any of the Pfizer vaccine, Rajesh Bhushan, the secretary at the health ministry, said New Delhi is in talks with all vaccine manufacturers. He added that India was in a position to “augment and strengthen” its existing cold-chain capacity, but declined to release any purchase details immediately.

Pfizer already has orders from some developing countries like Peru, Ecuador and Costa Rica. It’s unclear how widely those nations plan to distribute the shots, but their small orders of less than ten million doses suggest limited deployment.

After the release of their positive preliminary data, some governments have rushed to finalize orders and start negotiations with Pfizer and BioNTech. The European Union confirmed an order of up to 300 million doses on Tuesday, while the Philippines, Singapore and Brazil said they were in talks.

Even without the subzero issue, rolling out a vaccine in a short space of time will be a “major challenge” requiring mass paramedical training to administer two-shot doses, said Pankaj Patel, chairman of Indian drugmaker Cadila Healthcare Ltd, which is developing its own experimental plasmid DNA Covid-19 shot.

This is especially so in areas where people are not easily contactable or have to travel long distances to reach vaccination centers. Past vaccination campaigns show that many simply never show up for the second shot, said public health experts.

The mounting obstacles mean that some developing countries may pass on the Pfizer vaccine, despite early signs of its exceptional efficacy.

“If we were to wait an extra year and have something that’s feasible for us to deliver to as many people as possible in this country, would that be a bad trade-off?” asked Gagandeep Kang, professor of microbiology at the Vellore, India-based Christian Medical College and a member of the WHO’s Global Advisory Committee on Vaccine Safety.

“Based on the cost of the Pfizer vaccine, the logistics of an ultra-cold storage -- I don’t think we are ready and I think this is something that we need to weigh the benefits and the costs very, very carefully,” she said.