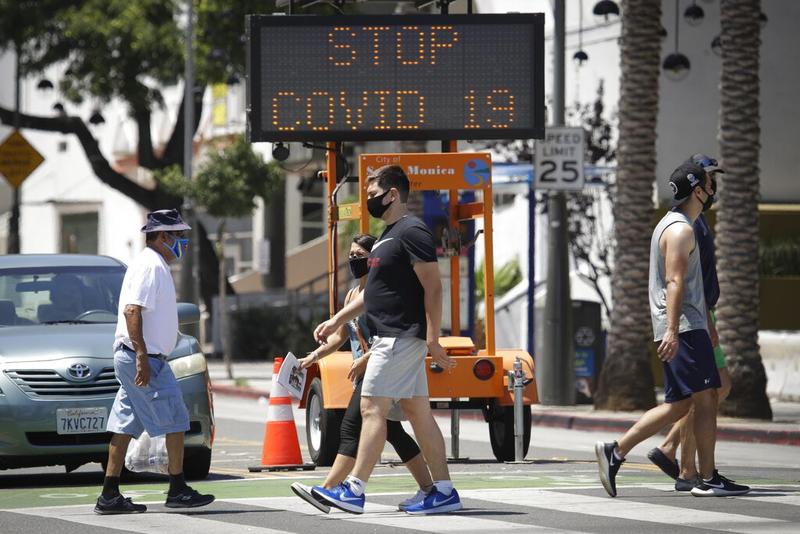 The biggest increases were from the United States, Brazil, India and South Africa, according to a daily report. The previous WHO record for new cases was 228,102 on Friday. Deaths remained steady at about 5,000 a day.

Global coronavirus cases were approaching 13 million on Sunday, according to a Johns Hopkins University tally, marking another milestone in the spread of the disease that has killed more than 568,000 people.

Argentina exceeded 100,000 cases of novel coronavirus infections on Sunday as it struggles to contain spiraling case rates despite a strict quarantine imposed on the capital Buenos Aires and its surroundings.

The death toll stands at 1,845, a far cry from the 71,469 in Brazil by Sunday and the 11,682 in Peru. But confirmed case numbers moved into four figures daily in early June and for the past four days have hit at least 3,000 daily.

Carla Vizzotti, deputy health minister, said the lockdowns would be maintained while hospitals continued to fill up.

Mauro Grossman, an intensive care doctor at Ezeiza Hospital in Buenos Aires, told Reuters he believed the peak was approaching.

Brazil, the world's No. 2 coronavirus hot spot after the United States, registered 631 more deaths on Sunday, with a new total of 1,864,681 confirmed cases, the Health Ministry said.

Brazil now has an official total of 72,100 deaths, the ministry said. The numbers of deaths and cases are usually lower on the weekend because of patchy reporting. Experts say the true totals are likely far higher due to a lack of testing.

Ontario Premier Doug Ford will announce details on Monday about the province's third stage of reopening, his office said on Sunday, a step likely to end most restrictions introduced in March to limit the spread of the novel coronavirus.

Stage 3 will allow "most remaining workplaces and community spaces" to reopen, according to the province's website, although "large public gatherings will continue to be restricted".

Ontario, with a population of 14.6 million, reported 129 new COVID-19 cases and three deaths on Saturday, according to public health agency data. Ontario has the second-highest number of cases and deaths behind Quebec.

Canada has reported 107,347 cases since the pandemic began, including 8,773 deaths, according to the latest government data.

A series of small local outbreaks and a growing trickle of foreign arrivals are starting to nudge the number of coronavirus infections in Italy higher, according to information released by the Ministry of Health Sunday.

There were 234 new cases reported in the last 24 hours, up from 188 a day earlier. It was the seventh time in ten days that there were at least 200 new infections in Italy, a benchmark reached just twice in the ten days before.

According to Italian media reports, isolated clusters of infections and arrivals from outside Italy's borders - or a combination of the two factors - are the elements keeping infection rates from falling further. The jump in new cases was enough for Calabria's President, Jole Santelli, to call on the government to use navy vessels to test migrants for the virus before allowing them onto the Italian mainland, according to the Gazzetta del Sud, a major southern Italian newspaper.

Meanwhile, just nine more deaths were recorded across Italy on Sunday, bringing the overall toll to 34,954. The official number of active infections stood at 13,179, down by 124 in the last day.

Deaths in Mexico from the coronavirus pandemic rose above 35,000 on Sunday, with the Latin American country overtaking Italy for the world's fourth-highest death toll.

But leftist President Andres Manuel Lopez Obrador said on Sunday that the pandemic was "losing intensity" in Mexico, and blamed what he called "conservative media" for causing alarm. Lopez Obrador also backed Hugo Lopez-Gatell, Mexico's deputy health minister and coronavirus czar, after criticism of his handling of the crisis.

Mexico's Health Ministry on Sunday reported 4,482 new confirmed infections and 276 additional fatalities, bringing the total in the country to 299,750 cases and 35,006 deaths. The government has said the real number of infected people is likely significantly higher than the confirmed cases.

Italy has recorded 34,954 deaths and 243,061 cases. Mexico trails the United States, Brazil and the UK in total deaths.

South Africa will reimpose a ban on the sale of alcohol and a nighttime curfew to reduce pressure on its hospitals as coronavirus infections rise rapidly, President Cyril Ramaphosa said on Sunday.

The nighttime curfew will last from 9 pm to 4 am and take effect from Monday, apart from for those travelling to or from work or seeking medical help. Regulations on the wearing of masks will be strengthened, but the country will remain on the third level of its five-level coronavirus alert system. Family visits and social activities remain banned.

Ramaphosa said current projections showed different provinces would reach the peak of infections between the end of July and late September. He said scientists had presented models that forecast between 40,000 and 50,000 coronavirus deaths before the end of the year.

South Africa has the highest number of confirmed coronavirus cases in Africa and is now recording the fourth-largest daily increase in new cases worldwide.

Another 21 COVID-19 deaths were registered in Britain as of Saturday afternoon, bringing the death toll in the country to 44,819, the British Department of Health and Social Care said Sunday.

As of Sunday morning, 289,603 people have tested positive for the disease in Britain, a daily increase of 650, according to the department.

Around 200 people employed to pick crops at a farm near Malvern in England's West Midlands region have been told to self isolate after 73 of them tested positive for COVID-19, Public Health England (PHE) and Herefordshire Council said on Sunday.

The AS Green and Co farm site has been placed in lockdown to try to contain the outbreak, which follows other clusters of cases at food producers, PHE and Herefordshire Council said.

Florida reported a record increase of more than 15,000 new cases of COVID-19 in 24 hours on Sunday, as the Trump administration renewed its push for schools to reopen and anti-mask protests were planned in Michigan and Missouri.

The latest rise in Florida was reported a day after Walt Disney World in Orlando reopened with a limited number of guests who were welcomed with a host of safety measures, including masks and temperature checks.

In addition to a record 15,000 new cases, more than four dozen hospitals in Florida reported that their intensive care units are full due to a surge in COVID-19 patients.

Nationally, coronavirus cases rose by 55,688 compared with the same time Saturday to 3.27 million, according to data collected by Johns Hopkins University and Bloomberg News. Deaths rose 0.4 percent from Saturday to 134,904.

New York City, once the epicenter of the US outbreak, reported its first day with zero confirmed or probable virus deaths on Sunday since the pandemic began, according to initial data from the city’s health department.

Meanwhile, Education Secretary Betsy DeVos said that her department did not have its own safe reopening plans to promote, and each school district and state must devise their own plans based on their local coronavirus infection rates.