Trump pledges to deploy troops across the US amid protests 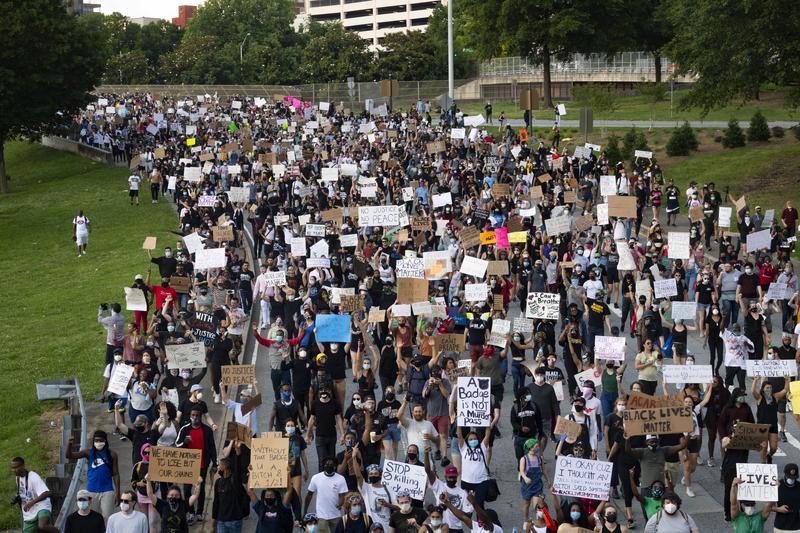 Activists fill Centennial Olympic Park Boulevard during a demonstration, June 1, 2020, over the death of George Floyd, who died May 25 in Minneapolis. (JOHN AMIS / ATLANTA JOURNAL-CONSTITUTION VIA AP)

WASHINGTON / MINNEAPOLIS / WELLINGTON / AMSTERDAM - US President Donald Trump promised a forceful response to violent protests across the country and threatened to deploy the US military if cities and states fail to contain unruly demonstrations touched off by the death of a black man in police custody.

I am mobilizing all available federal resources civilian and military to stop the rioting and looting to end the destruction and arson and to protect the rights of law abiding Americans.

During hastily arranged remarks Monday evening, Trump pledged to do everything he could to preserve order, including in Washington, where vandalism, looting and fires overshadowed three days of peaceful protests over the killing of George Floyd in Minneapolis last week.

“I am mobilizing all available federal resources civilian and military to stop the rioting and looting to end the destruction and arson and to protect the rights of law abiding Americans,” Trump said from the Rose Garden at the White House.

Moments before the president spoke, as White House officials prepared for his remarks, security forces used tear gas, concussion grenades and fired rubber bullets to clear peaceful protesters from streets around Lafayette Square across from the White House. After his brief address, he made an unnannounced visit on foot to the historic Saint John’s Episcopal Church less than a day after it was damaged by fire during demonstrations late Sunday night.

Trump has seized on protests against police brutality toward people of color to portray himself as an icon of law and order, eschewing the soothing role past presidents have adopted in similar moments as he seeks to turn the election-year conversation from his widely panned handling of the coronavirus outbreak.

If localities refused to take “necessary” actions to stop protests, Trump said, “I will deploy the United States military and quickly solve the problem for them.”

The Pentagon said 600 to 800 National Guard troops are being sent to Washington as Trump seeks to quell further disturbances. Their primary role will be to defend national monuments, protect the White House and coordinate with Washington’s police, according to the officials at the Defense Department.

To dispatch troops, Trump is considering relying on the 1807 Insurrection Act, which authorizes the president to deploy the military within the US to deal with civil disorder, according to three people familiar with the matter. 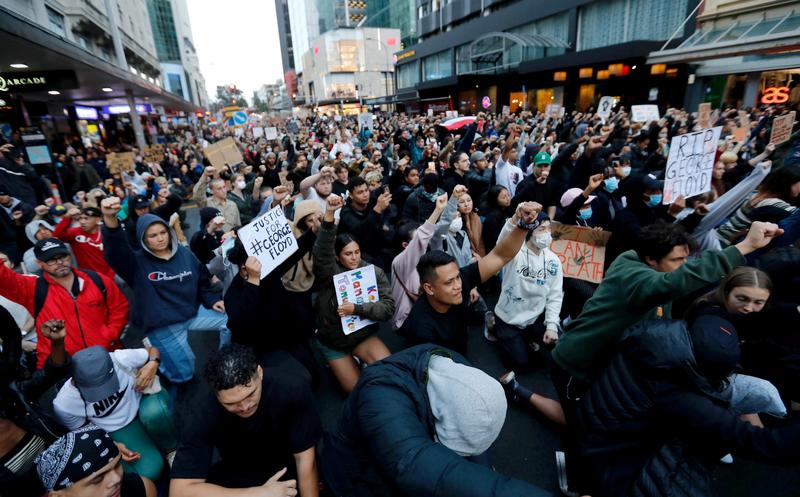 Demonstrators hold placards during a march in central Auckland, New Zealand, June 1, 2020, to protest the death of United States' George Floyd, a black man who died in police custody in Minneapolis on May 25. (DEAN PURCELL / NEW ZEALAND HERALD VIA AP)

“I will fight to protect you,” Trump said at the White House. “I am your president of law and order and an ally of all peaceful protesters.”

On a Monday call with governors and law enforcement officials, Trump delivered his most strident message yet as cities across the country impose curfews and governors deploy the National Guard to try to head off another destructive evening. Many other peaceful protests also are underway mourning the death of Floyd at the hands of police in Minneapolis and demanding an end of police violence directed at blacks and other minorities.

The curfews were imposed as most Americans were still emerging from weeks of strict “stay-at-home” orders imposed in the face of the coronavirus pandemic.

“You have to dominate,” Trump told governors and law enforcement. “If you don’t dominate, you’re wasting your time. They’re going to run over you, you’re going to look like a bunch of jerks.” He called the governors “weak.”

At the same time, he said Americans had been justifiably outraged by Floyd’s death and would support the right to protest peacefully.

Police in Minneapolis on Friday arrested Derek Chauvin, the officer who was seen on video kneeling on Floyd’s neck for more than eight minutes during an arrest.

Floyd, who was on the ground and handcuffed at the time, died after saying he couldn’t breathe. The episode prompted a nationwide outcry and set off protests around the country. In Minneapolis, some of those protests turned violent, and on Thursday the police station where Chauvin worked was burned.

A second autopsy ordered by Floyd’s family and released on Monday found that his death was a homicide by “mechanical asphyxiation,” meaning that physical force interfered with his oxygen supply. The report says three officers contributed to Floyd’s death.

The Hennepin County Medical Examiner then released details of its autopsy findings that also said Floyd’s death was a homicide caused by asphyxiation. The county report added that Floyd suffered cardiopulmonary arrest while being restrained by police and that he had arteriosclerotic and hypertensive heart disease, fentanyl intoxication and recent methamphetamine use.

Joe Biden, the presumptive Democratic nominee for president, was pressed to detail what he’d do to address injustice, and said he would set up a national police oversight board in his first 100 days as president and would ensure coronavirus relief efforts would “deal with institutional racism.”

At the White House, there’s been particular concern about nearby protests that have led to looting, arson and clashes with police.

Officials in Washington plan to enforce a mandatory curfew starting at 7 pm local time for the next two days.

On Monday evening, Trump held a bible outside St John’s during his visit there. The Episcopal bishop of Washington, who oversees the church, Mariann Budde, denounced the clearing of the park for the event.

“The soul of the nation is at stake right now,” the bishop said on CNN. 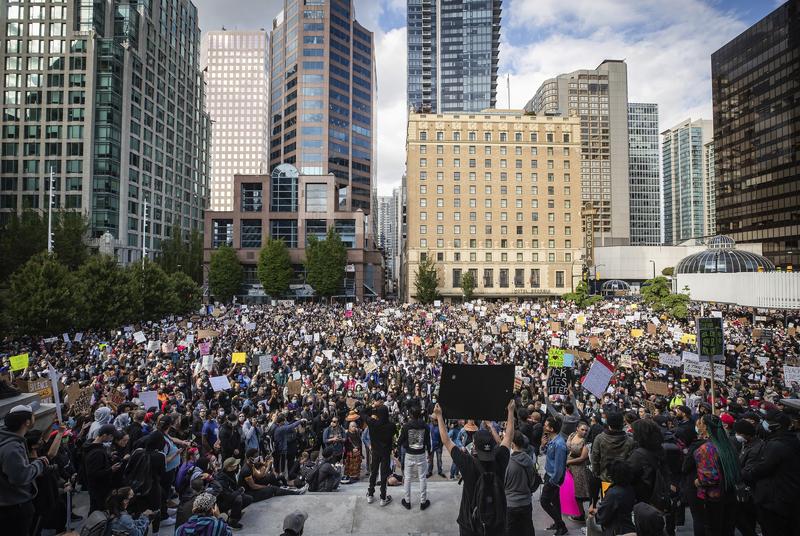 Thousands of people gather for a peaceful demonstration in support of George Floyd and Regis Korchinski-Paquet and protest against racism, injustice and police brutality, in Vancouver, on May 31, 2020. (DARRYL DYCK / THE CANADIAN PRESS VIA AP)

And Washington’s mayor, Muriel Bowser, said in a tweet that “a full 25 minutes before the curfew & w/o provocation, federal police used munitions on peaceful protesters in front of the White House.” She called that response “shameful.”

New Zealand Prime Minister Jacinda Ardern said on Tuesday that she was “horrified” by Floyd’s death, and welcomed peaceful protests in the country in solidarity, but noted that they flouted social distancing restrictions.

Thousands of New Zealanders marched peacefully on Monday amid protests in the US and around the globe decrying how Floyd died in police custody last week. The event was part of a number of protests around the globe, from London and Berlin to Australia and the Netherlands.

“I think I stand with everyone else in being horrified in what we’ve seen,” Ardern told state broadcaster TVNZ in an interview.

As Canadian Prime minister Justin Trudeau vowed fight racism in the country, thousands staged a peaceful protest on Saturday in Toronto to demand answers in the death of Regis Korchinski-Paquet, a 29-year-old black woman who fell from her 24th-floor apartment balcony last week while police were present.

Vancouver and other Canadian cities also held peaceful protests over the weekend, but tensions flared after a march in Montreal on Sunday when protesters smashed windows and set fires.

Thousands of protesters chanting “I can’t breathe” gathered in central Amsterdam on Monday in solidarity with Floyd.

Around 10,000 filled Amsterdam’s Dam square, ignoring calls for social distancing and shouting “Black lives matter” and “No justice, no peace”.