Coronavirus: Plasma therapy could lead to development of vaccine 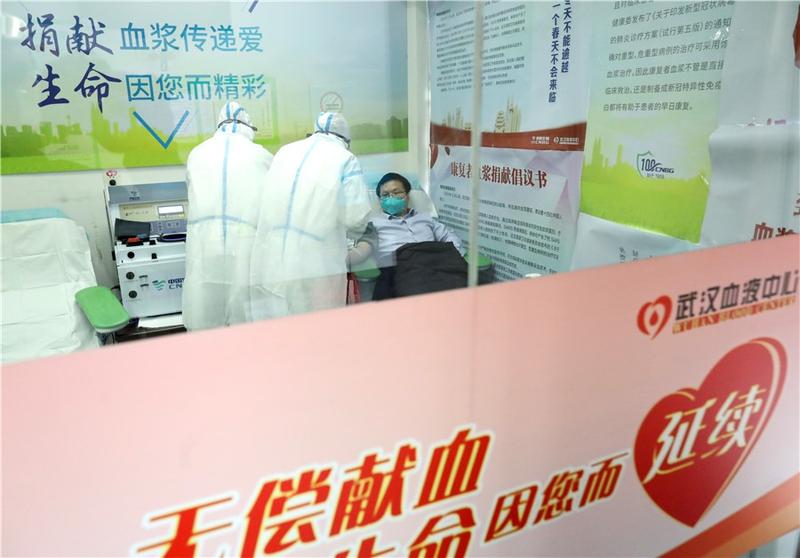 While scientists in Wuhan are trying to cure novel coronavirus pneumonia patients with blood plasma collected from people who have recovered from the disease, they are also working to develop a vaccine based on the new therapy, a leading member of the research team said on Sunday.

Seven patients are receiving treatment using the therapy at Jiangxia First People's Hospital, in Wuhan's Jiangxia district, and it seems to be working, Liu Bende, vice-president of the hospital, said.

"Of the patients, those in serious condition have not deteriorated so far, while those in a milder condition have showed improvement," he said. "In general, we have not seen serious side effects or complications due to the therapy."

Similar methods, using antibodies in the plasma of recovered patients to fight a virus, were used to treat patients during the severe acute respiratory syndrome (SARS) epidemic in 2003, he said.

The hospital started to carry out the therapy on Feb 8, becoming the first in Wuhan to do so. The latest guideline on the diagnosis and treatment of the virus released by the National Health Commission earlier this month included convalescent plasma as an option for treatment of the virus.

"We started to consider using the therapy after failed efforts that lasted for a month to find an effective means to treat the patients," Liu said. "Another important reason is that we hope to find the specific antibody from the plasma of recovered patients that targets the virus, which can pave the way for the development of a vaccine."

The plasma of recovered patients contains many different kinds of antibodies, so the researchers will select the best antibody for the virus from supplies of plasma that have produced the best effects in treating patients, he said.

In addition to the hospital, other institutions such as the Wuhan Institute of Virology and an institute owned by State-owned Sino Pharm have joined the research, Liu said.

"We hope to find the best antibody as soon as possible, although it is difficult and takes time," he said, adding that a major difficulty was a lack of plasma donors.

Liu said that although the therapy had safety risks, such as contaminated blood and side effects, it was still worth trying as there were no effective drugs available to treat the disease. At Wuhan's Jinyintan Hospital, the therapy has also showed some effectiveness, Zhang Dingyu, the president of the hospital, said earlier.

Hospitals in Shanghai are also trying to use the therapy to treat patients with novel coronavirus pneumonia. The municipal Health Commission has called for patients who have recovered from the disease to donate plasma for the treatment of other patients.

China National Biotec Group, a participant in the research, said 31 people who had recovered from the disease had donated plasma as of Saturday. It will be processed for clinical use to treat other patients.

Liu, from Jiangxia First People's Hospital, said caution was needed when promoting the therapy, as there were strict requirements for plasma suppliers and receivers.

"For example, plasma from patients with chronic diseases cannot be used, even if they have recovered from novel coronavirus pneumonia," he said. "Also, some patients, such as those prone to allergy, are not suitable to receive such treatment."