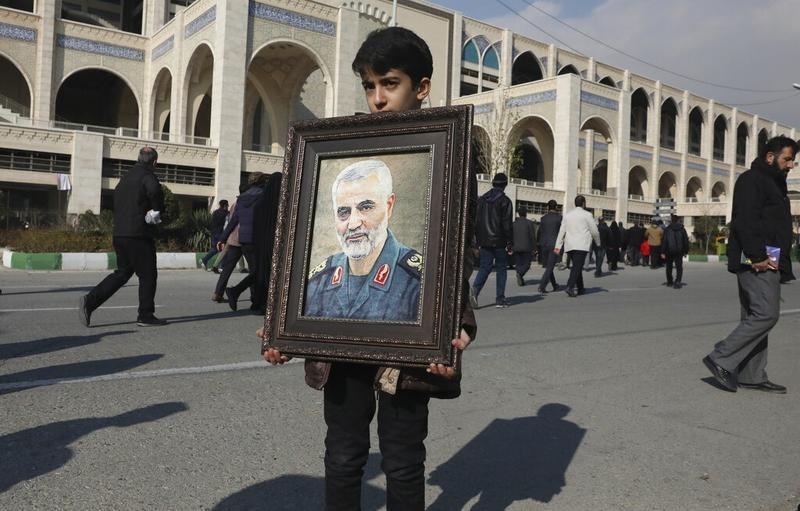 A boy carries a portrait of Iranian Revolutionary Guard Gen Qassem Soleimani, who was killed in the US airstrike in Iraq, in Tehran, Iran, Jan 3, 2020. (VAHID SALEMI / AP)

BERLIN — The killing of Iranian General Qasem Soleimani by the military of the United States appears to be in breach of international law, according to an evaluation published by the Scientific Service (WD) of the German Bundestag (federal parliament).

The Bundestag experts' report found that "it is not clear why the killing of Soleimani in Iraq should have been absolutely necessary to ward off an acute danger to the lives of Americans ultima ratio."

Commissioned by the Left Party and sent to Xinhua on Tuesday, the Bundestag experts' report found that "it is not clear why the killing of Soleimani in Iraq should have been absolutely necessary to ward off an acute danger to the lives of Americans ultima ratio."

A drone attack ordered by US President Donald Trump killed Soleimani at the beginning of January and the move has instantly inflamed the already strained tensions between Washington and Tehran. The US administration has justified Soleimani's killing with allegedly planned attacks on US citizens and embassies, but did not reveal any evidence.

The attack on Soleimani obviously did not meet the criteria for a "final rescue shot" and appeared to be in violation of the right to life as stipulated in the International Covenant on Civil and Political Rights (ICCPR), according to the report.

ALSO READ: Trump’s Soleimani strike seems to pay off, but for how long?

Heike Haensel, deputy chair of the Left Party's parliamentary group, said that the legal evaluation was "a slap in the face" for the German government, which refused to condemn President Trump's order to assassinate Soleimani.

"Anyone like the German government who, out of false solidarity with the alliance, backs Trump in trampling international law underfoot is making himself completely non-credible as a mediator for the de-escalation of the conflict in the Middle East," Haensel stressed.