By Wang Yuke and Yang Han in Myanmar 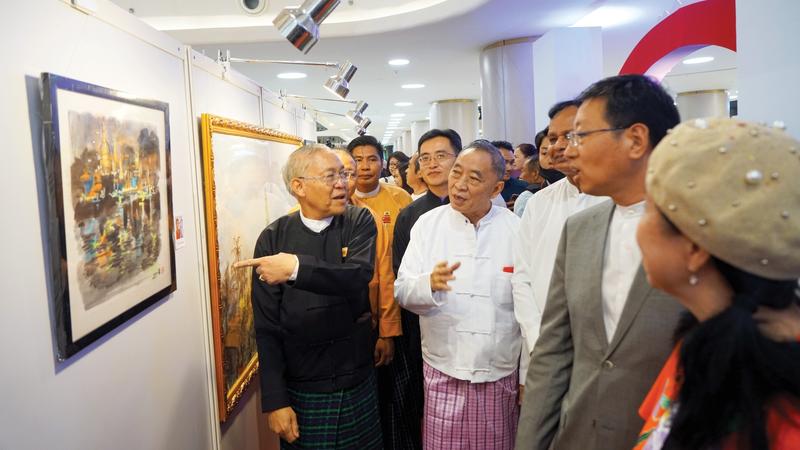 As a 10-day art and culture exchange visit to Myanmar drew to a close, participating artists presented brilliant watercolor works inspired by the Buddhist country.

Myanmar: Through the Dragon’s Brush, an art and culture exchange program organized by China Daily and the Chinese Culture and Art Association, brought works of nine Chinese artists to four major cities in Myanmar — Yangon, Mandalay, Bagan and Inle Lake — where they told tales of the country with brushes and canvas.

The 32 finished works exhibited on the trip’s last two days were well received in Yangon, managing to capture the multilayered characteristics of the country — sacred and traditional, also humble, modern.

Upon arrival in Yangon on Nov 14, the group was warmly welcomed by Argus Ang, chief executive of RVi Group, a main supporting organization for this exchange program.

During the next two days (Nov 15-16) in Yangon, the artists visited the landmark Shwedagon Pagoda and held a sketch session at Kandawgyi Lake, which offered a distant and panoramic view of the pagoda. They also visited U Lun Gywe Art Gallery, for a glimpse into the local art forms, styles and genres.

The glittering gilded stupa, being renovated manually, stopped the artists in their tracks. They also marveled at Myanmar people’s faith in their religion.

A highlight during the stay in Yangon was a meeting with Hong Liang, the Chinese ambassador to Myanmar. Acknowledging that the China-Myanmar art exchange trip helped artists from both sides to find common ground creatively, Hong shared with the artists what the embassy has been doing to bolster cultural ties between Myanmar and China.

Apart from the opening in July of the China Cultural Center in Yangon, the embassy has held concerts, grand shows and exhibitions in collaboration with national and provincial art institutions from China.

The embassy envisions launching another art center in the near future — in Myanmar’s capital, Naypyidaw. It is projected to be 15,000 square meters, much larger than the current center in Yangon. “We hope the art centers in Myanmar could serve Chinese artists as ‘free galleries’ that they can make full use of to exhibit their great works of art,” said Hong.

Pleased to see that regular art performances and exhibitions have attracted curious locals, Tian Shanting, cultural counselor at the embassy, declared that the newly opened art center will “open to the public every day, with cultural activities available every week and highlight programs every month”.

Although art is emphasized in the country, Myanmar art has remained obscure in the world scene. Hong put this down to the country’s instability, which had subdued the people’s creativity. He hoped the two-way communication on art between China and Myanmar could “help fuel the dynamic of creating art (in Myanmar) and prompt local artists to unleash their potential”.

The 10-day art and culture exchange program was organized by China Daily and the Chinese Culture and Art Association. (PHOTO PROVIDED TO CHINA DAILY ASIA WEEKLY)

Hong also noted that promoting art exchange between the two countries against the backdrop of the Belt and Road Initiative has profound implications. Since Myanmar is a key direct access point to the Indian Ocean for China, the impact of China-Myanmar art and cultural exchange will extend further to the regions along the Indian Ocean, generating economic benefits.

Zhou Yanzhao, chairman of the Chinese Culture and Art Federation and an international art critic, who accompanied the tour, said art acts as an effective medium of communication in the Belt and Road Initiative. “Art helps to channel one culture into the other and establishes mutual recognition with other cultures. The mutual understanding is built through connectivity, which is an unconscious and a gradual process,” he said.

Zhou added that collaborative painting, an important part of the Myanmar art trip, is a good example of how artists can bond over and attain harmony through cooperation.

The artists spent the afternoon in Mandalay visiting the Kuthodaw Pagoda, which is renowned for containing the world’s largest book — a giant stone tablet at the foot of Mandalay Hill inscribed with text from the Buddhist Tripitaka. The shimmering gold-plated stupa, ubiquitous domed white shrines, delicate mural paintings and relatively peaceful vibe evoked the artists’ desire to paint on the spot.

Next was a visit to the Myanmar Chinese Chamber of Commerce. U Myint Naing, the chamber’s executive vice-chairman, has paid much attention to art education in Myanmar.

Art education providers are in short supply in the country and awareness is low, he said. He has approached well-established art schools and troupes in China, hoping to co-launch exchange programs. Under construction is a vocational school with the support of Yunnan University, in Southwest China, where art courses will be available.

The artists were split into two groups, arriving in either Bagan or Inle Lake on Nov 18. Bagan is known for its proliferation of Buddhist temples, pagodas and stupas, and the breathtaking views at sunset. Each group of artists was impressed — either by the grandeur of Bagan’s pagodas, or Inle’s serene lake lined with stilt houses — and their muses overflowed.

Collaborative painting sessions were held during the trip. Two completed large-size group paintings were exhibited together with 30 individual works on Nov 21 and 22 at Junction City in Yangon.

The opening ceremony of the exhibition was followed by a panel discussion: famous artists from China and Myanmar shared their thoughts on the value of culture and art exchanges.

Among the guests was U Alistair Ang Eng Chong, general manager of RVi Institute, part of the RVi Group.

U Aik Htun, chairman of Shwe Taung Group, a leading corporation in Myanmar and a cosponsor of the art tour, said: “The art exchange program will help bring Myanmar’s art and folk culture to the international community. It will prove important in boosting Myanmar’s economy.”

Shwe Taung Group has partnered with corporations from 12 countries to improve the infrastructure in Myanmar, ranging from express highways and railways to bridges and hydroelectric power. “But we can’t neglect the power of art,” said U Aik Htun. “Only by improving the art intelligence in the country could people shape a forward-looking mind-set.”

Rounding off the 10-day art and culture exchange was the well-received exhibition and the panel discussion between Chinese and Myanmar artists. 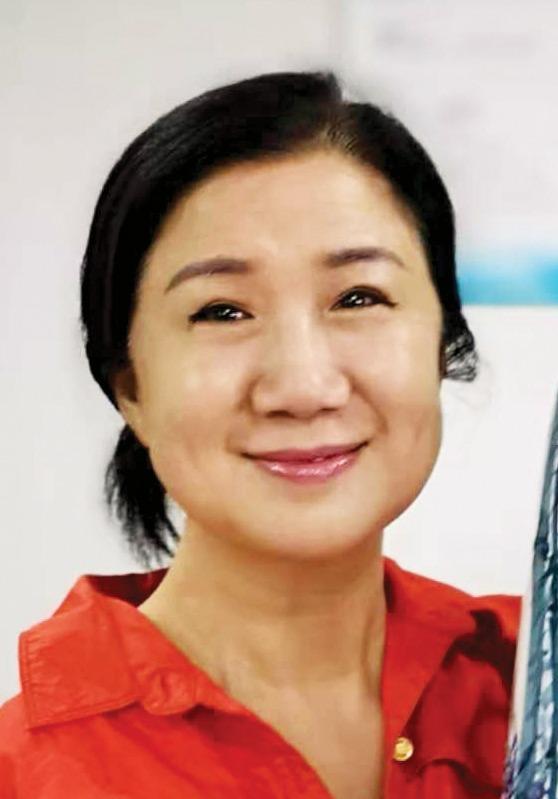 Director of China Artists Association and representative of the artists group

Before going to Myanmar, my presumptive impression about the country was that it was isolated, and very ancient just as the documentary Samsara depicted. The opening scene of the episode featuring Bagan showed a lifeless, deserted cityscape. My impression has changed after visiting the country. It dawns on me that Myanmar is a place full of personalities, diversity and vitality. It has a combination of both ancient and modern aspects. The participating artists capture Myanmar’s different sides by sketching in different cities at daytime and nighttime. 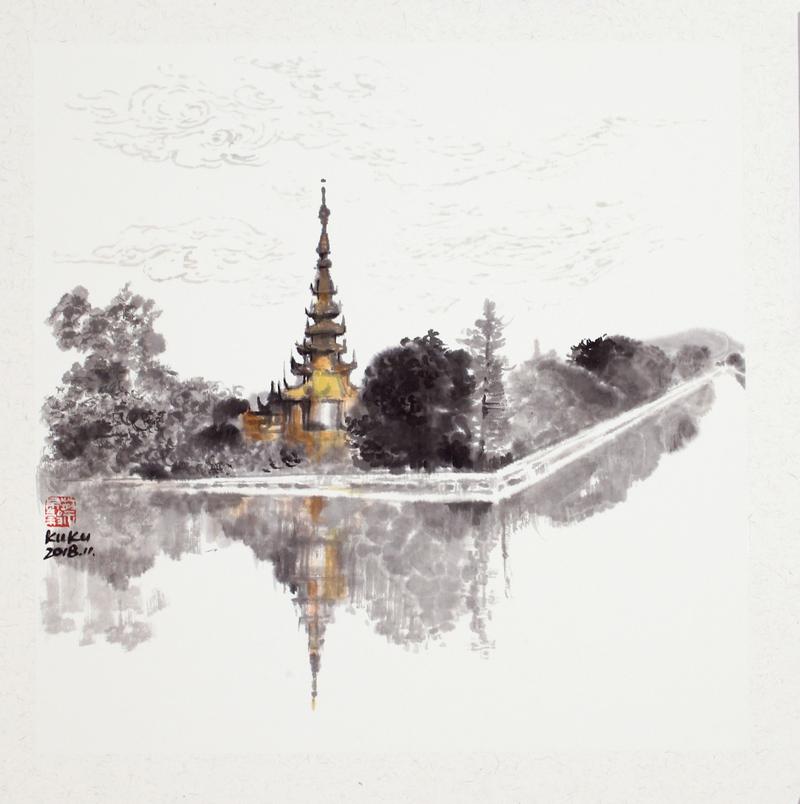 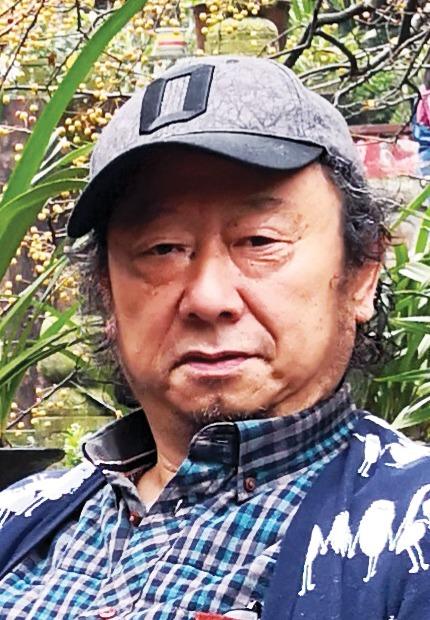 The most memorable thing of the trip is the U Bein Bridge in Mandalay. The wooden bridge has been going strong for 150 years, serving the people of the community as a crucial passageway from one point to another. I’ve been painting for so many years and there’s little room for improvement technically. At this stage, it is visual impact and cultural shock that enrich my artistic repertoire and inspire me to experiment with novel ways of expression.

Traveling and sketching is a good match for painters to compose art works. Painters are adept at communicating the emotions obtained from traveling, be it grief and poignant, or pleasant and elated, in the words of a painting. 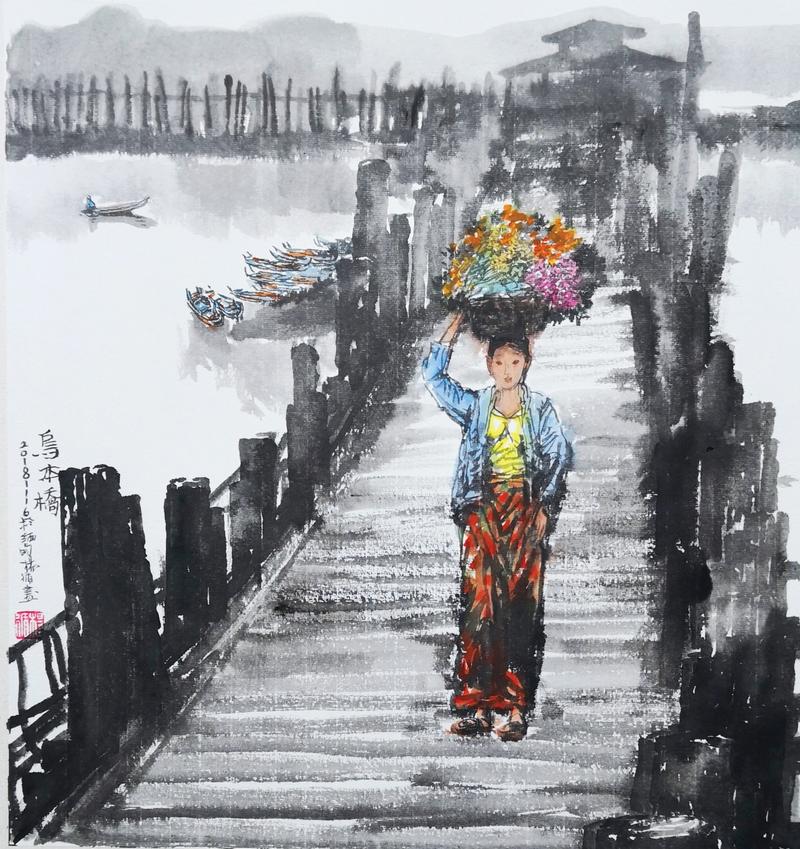 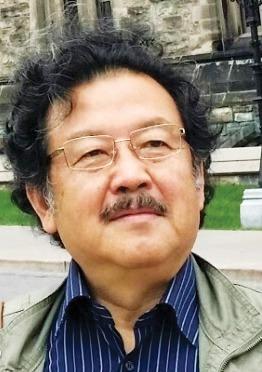 I’m not new to collaborative painting. I’ve been engaged in producing many large-scale works such as Yangtze River Miles Chart, Huang River Miles Chart and Silk Road Landscape. But the collaboration this time was different. We hadn’t collaborated before, thus (were) unfamiliar with each other’s artistic styles. Improvising within a short period made the collaboration even harder. But thanks to the enthusiasm shared by all painters and similar aesthetic values, we created a few great pieces of works. We adhered to the traditional Chinese techniques during the improvisation, but in the meantime we strived to present something that people from different countries or cultures can easily relate to. 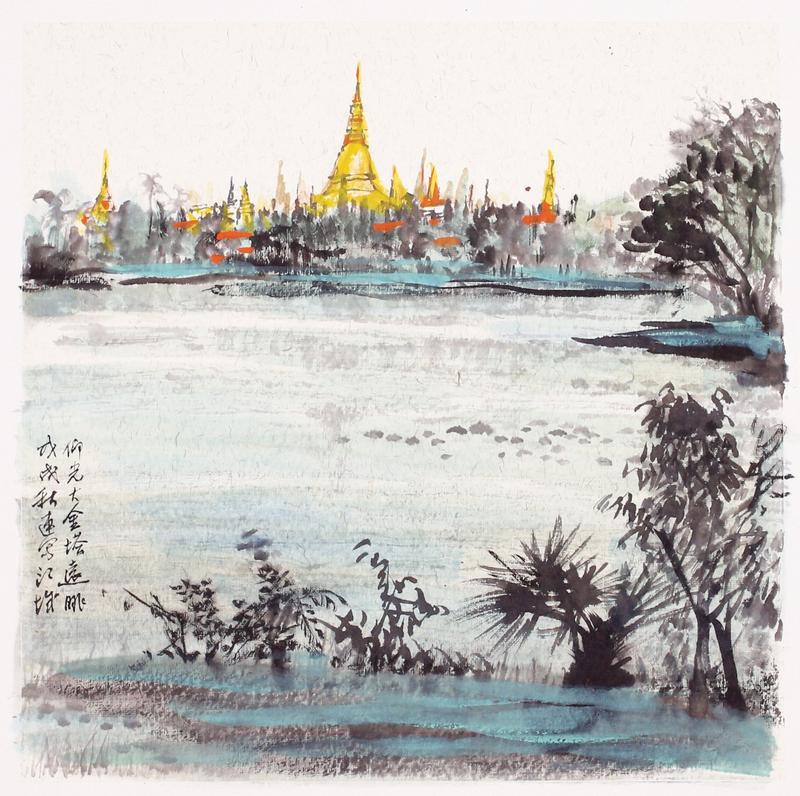 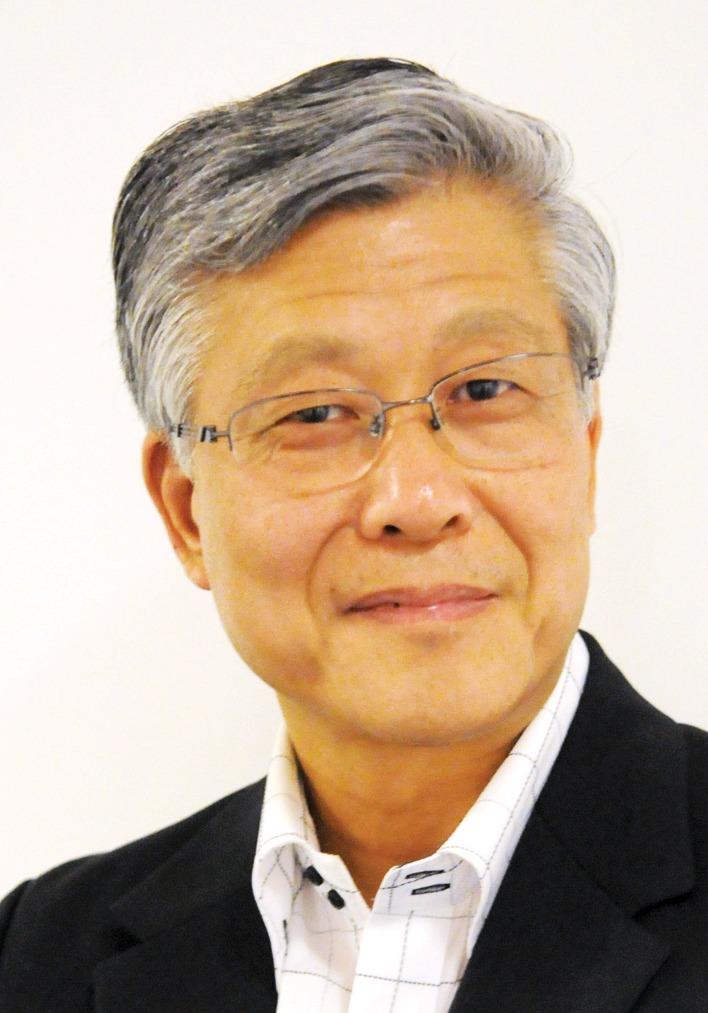 Relations between China and Myanmar have a long history, dating back to probably the 12th century. We were tasked with figuring out how to use art and culture to revive this relationship. For example, the connections between the lacquerware in Bagan and China could be an interesting topic to study. While the trip is too short to thoroughly understand Myanmar, each small discovery prompts artists to come up with new, creative ideas and to conduct more research on art. 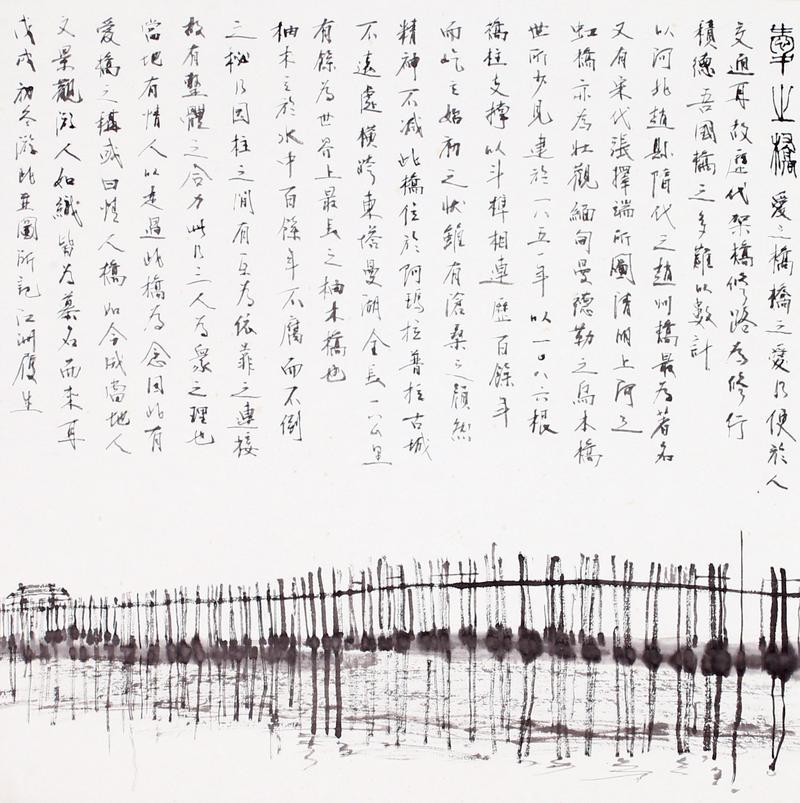 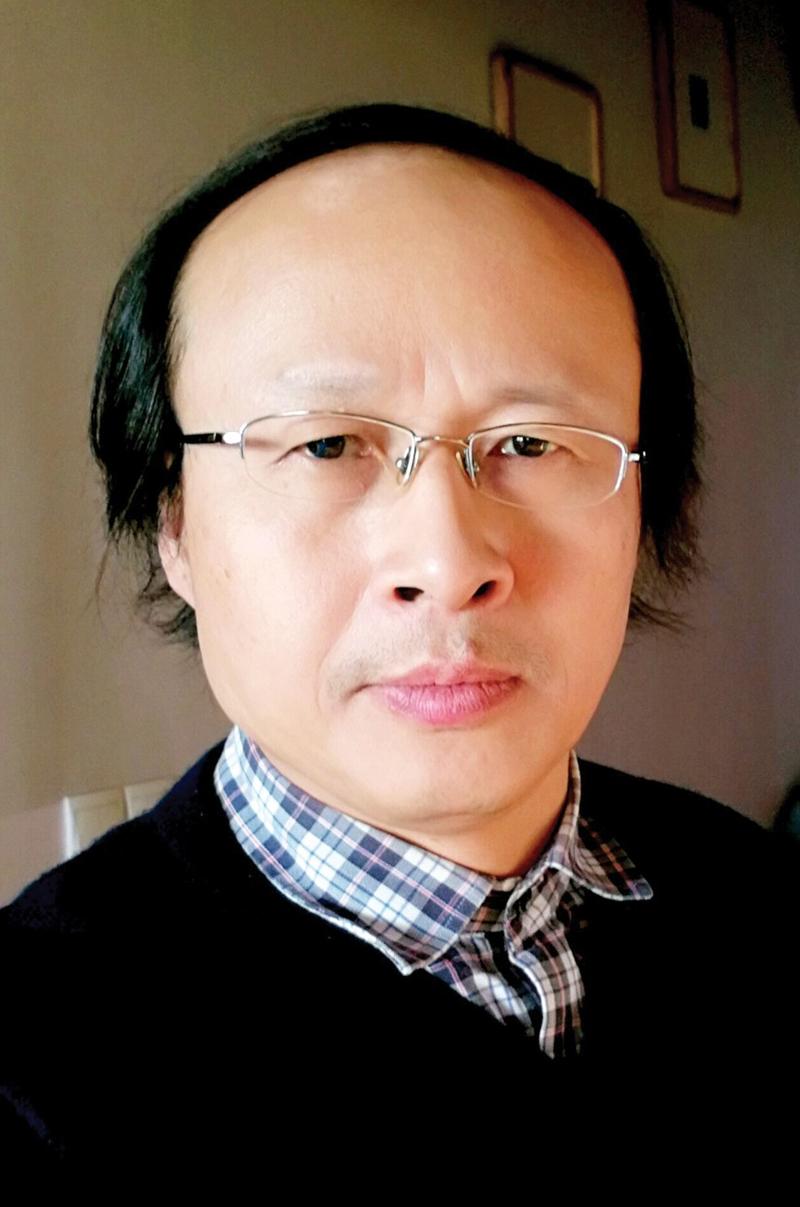 Compared to pagodas in Tibet, Myanmar’s version imparts a kind of unworldly spirit. The gilded stupas are cherished as an iconic landmark throughout the country. They are imposing and supreme, but not intimidating. Rather, I find the pagodas in Myanmar modest and down-to-earth. It defines the spirit of the city of Yangon, and the spirit is reflected in both urban and rural life. Churches are to European countries what temples are to a Buddhist country. Temples in Myanmar are places where people seek spiritual resonance and support. 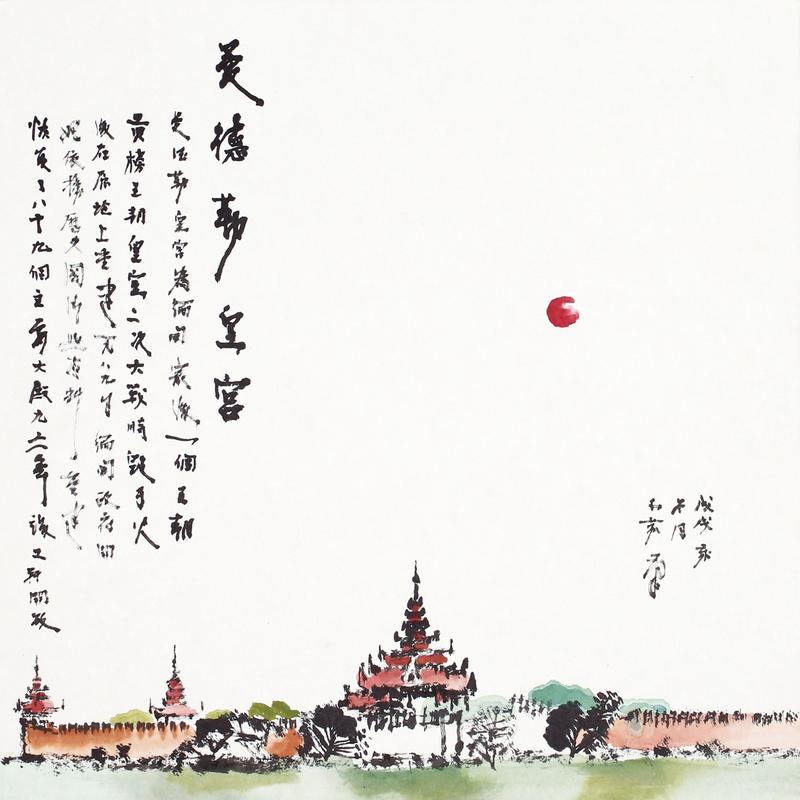 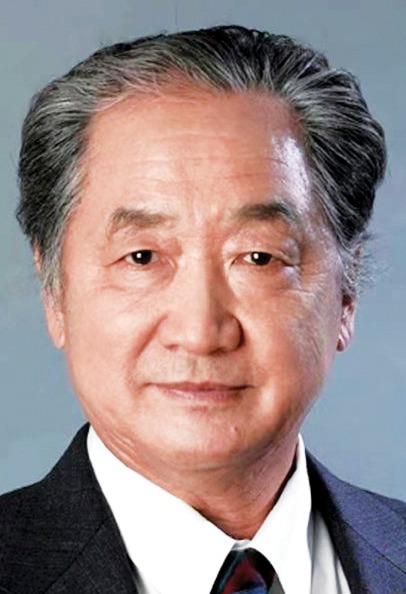 I am used to sketching outdoors where there are no proper desks, chairs, and painting tools. Our tour requires painters to make the most of available resources, and to try to capture the prominent features of the scenery. For example, Kandawgyi Lake was not the vantage point to observe the Shwedagon Pagoda. I had to imagine I was sitting at a higher point and picture the pagoda’s image in my mind. From there I think the pagoda should show layers of dimensions and that was how I interpreted it in my sketch. 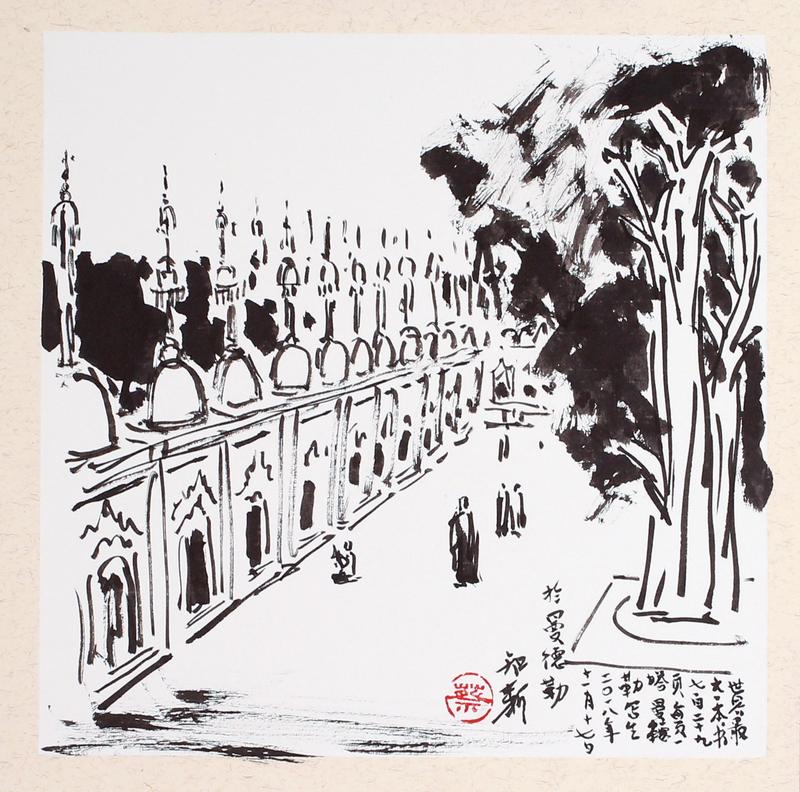 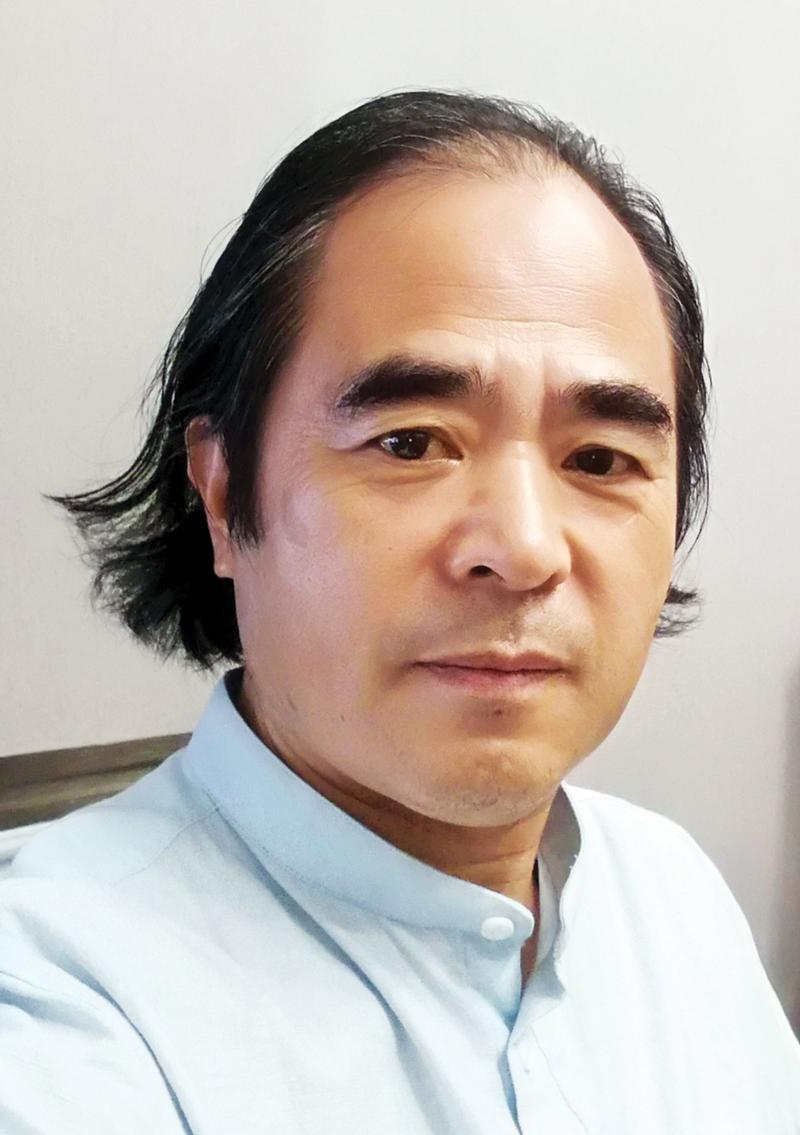 I’m seeking an interpretation of the Shwedagon Pagoda from a traditional Chinese aesthetic perspective. I find strong Western influences in Myanmar’s humanities, probably because of its long colonial history. While Western painting celebrates bold emotional expression, Chinese painting is more of a rational practice. I try to strike a balance when painting in Myanmar, by looking at the exotic architecture and scenery through the Chinese aesthetic lens.

Painting is not only about depicting the object itself, but also conveying the painter’s feelings about it. It is about how you understand the subject matter. The feeling does not come naturally. It is brewed and built up over time, which requires the painter to experiment with his/her techniques until he/she finds a proper way of expression.

As I stay longer in the country and explore extensively, I realize the pagodas are not only a structure in Myanmar. It is the essence of the whole country, as the spirit of Buddhism infiltrates every corner of the cities and every aspect of life. 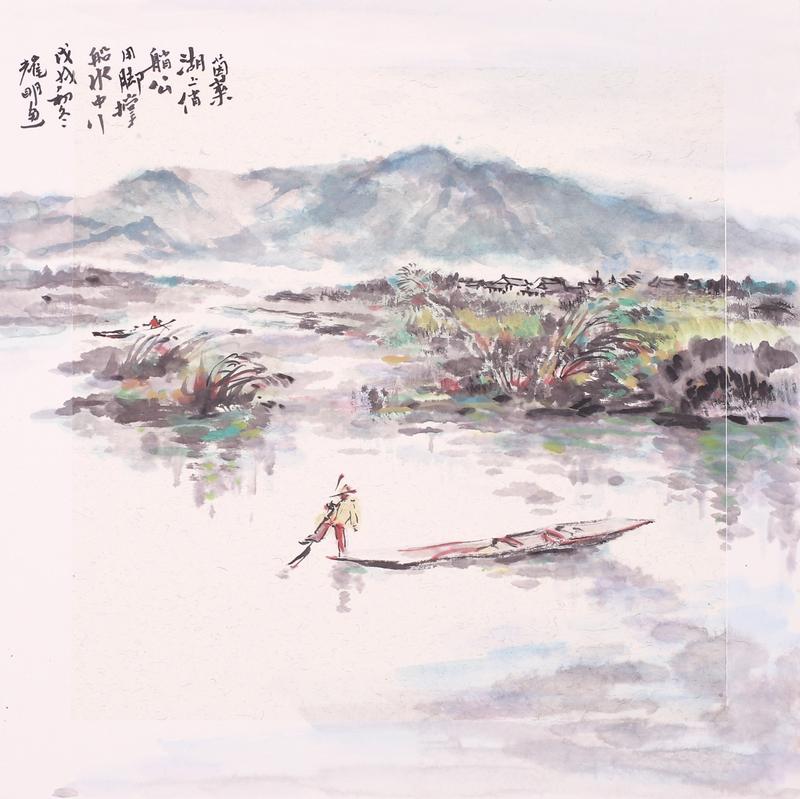 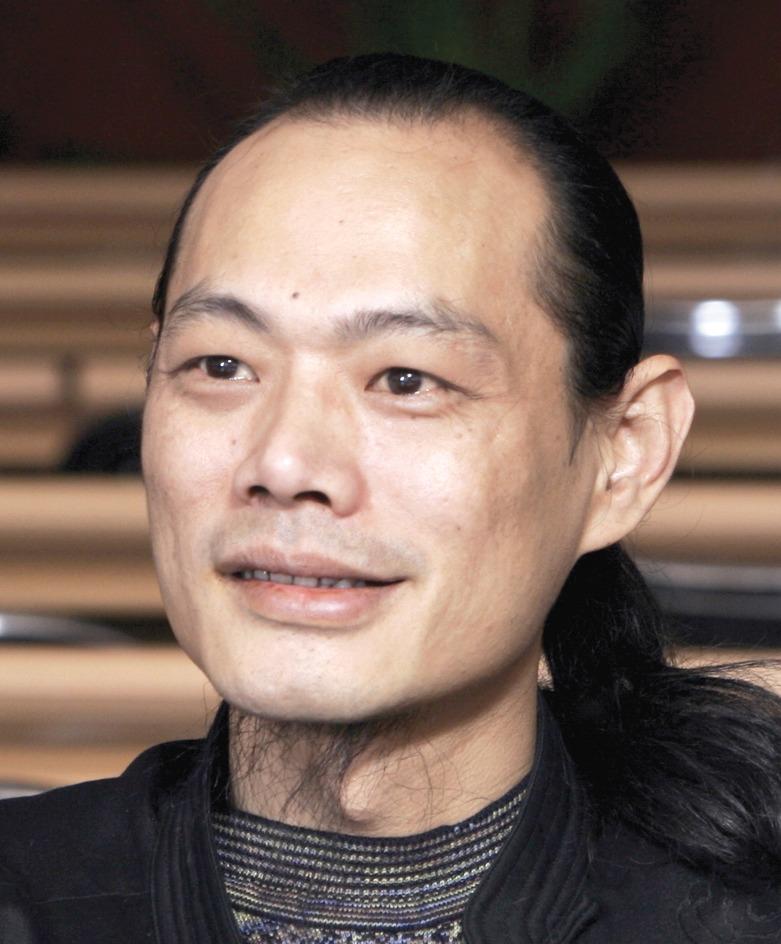 As a member of the 13th National Committee of the CPPCC, I feel obliged to introduce Chinese traditional art and culture to the world’s audiences. Regular art and cultural exchange counts a lot. Under the Belt and Road Initiative, we’re also reminded of the need to help other underdeveloped countries establish or advance their art identity. Chinese fine art boasts 5,000 years of history, while Myanmar is quite a young nation in this regard. China should utilize our experience to ‘guide’ inexperienced countries like Myanmar to find their unique voice in art creation, as opposed to ‘imposing’ our Chinese way of art expression on them. 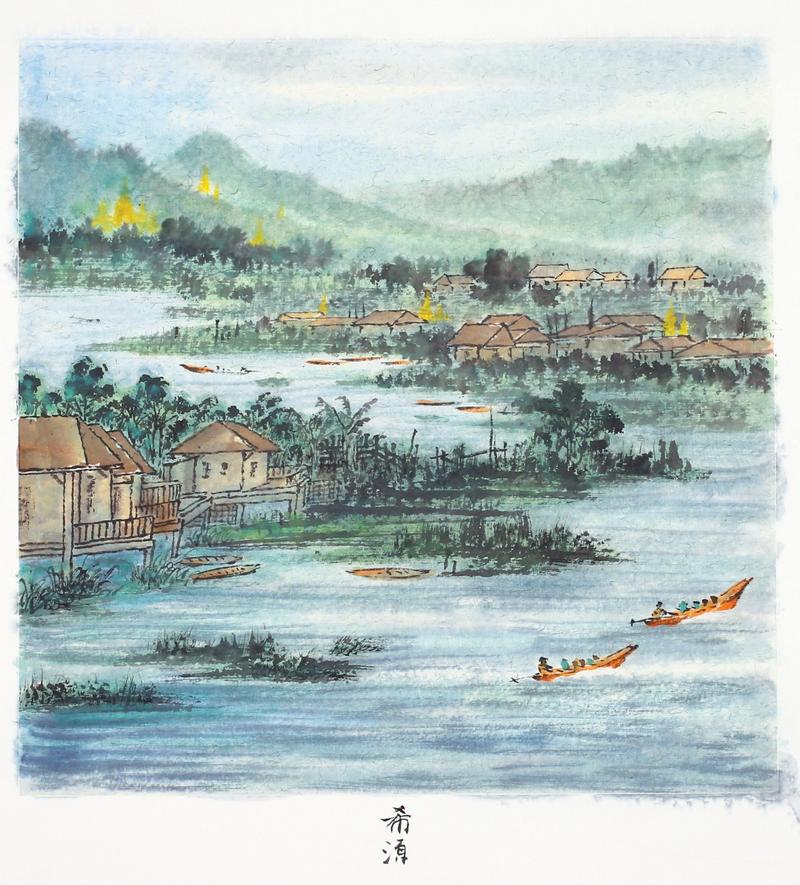