You may think that residential flats in Hong Kong yield the highest and safest investment return. You are wrong. The trade in taxi licenses yields even higher returns. The Hong Kong government promotes a free market in taxi licenses. Demand outstrips supply - which is capped by government policy. This market distortion has spawned a bonanza for taxi license owners.

The issue of 18,138 taxi licenses has remained frozen since 1998. Hong Kong has rising urban taxi commuter demand. Instead of maintaining a supply-demand equilibrium, the government's 18-year freeze on taxi licenses, has produced a scarcity bubble which yields capital gains for license owners, beyond the city's legendary real estate returns. 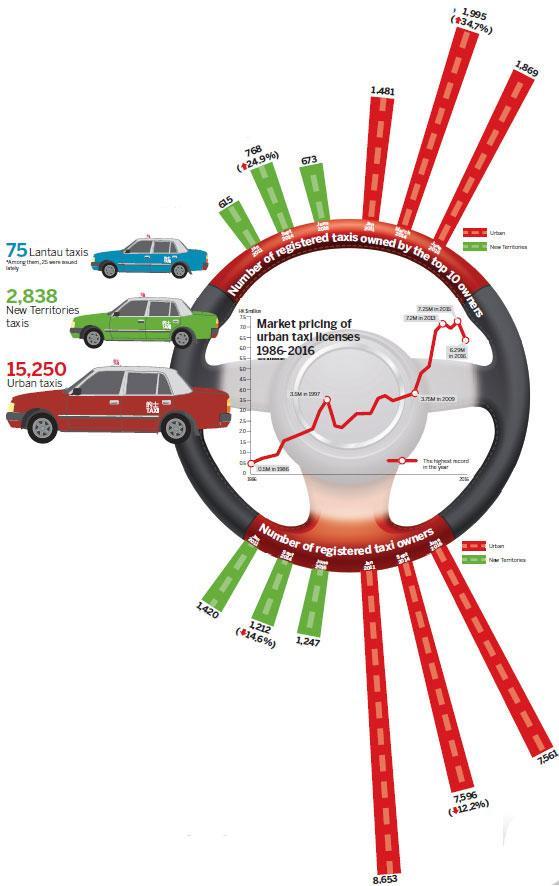 Taxi drivers are caught in a squeeze. The drivers, recruited by agents subcontracted from the owners, pay a fixed daily rent to the owners, irrespective of daily passenger fare income. There are about 40,000 taxi drivers in this no-win trap managed by agents. This marginal survival sees a high proportion of ageing, crusty, retired men as drivers. The risk falls on the agents and drivers, not the license owners.

The drivers, under daily financial pressure, are forced to optimize opportunity, often refusing passengers and destinations they regard as less profitable. During bad weather or peak events (like the annual Rugby Sevens), many are known to demand extortionist rates. The public complaints against rude drivers, fare refusal, and poor service, have risen to alarming levels. 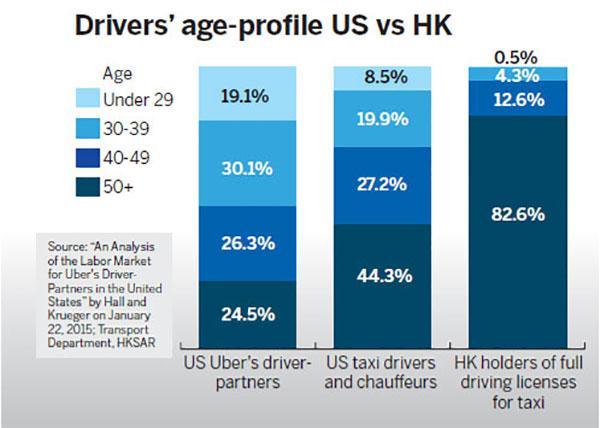 This situation has led to a commuter backlash against taxis. Some commuters have opted to pay higher fares for clean vehicles and polite service, from car-hailing services like Uber, using apps on their mobile phones. Waiting times are reduced, pick-up is prior confirmed and drives are hassle-free, in well-maintained private vehicles.

Most who opt for the Uber service, are middle class professionals who can afford a higher fare to save time and enjoy a pleasant ride. The majority of regular commuters either take public transport, or silently suffer the taxi service. Uber is in a legal grey zone, as private vehicles need a hire-car permit to pick up passengers. Consumers support it. Private drivers volunteer.

Uber driver one minute, white collar worker the next minute. That's what the car-hailing service has offered private car owners: work anytime you prefer. That has drawn a wide response from private car owners with time on their hands, keen to earn an extra income. 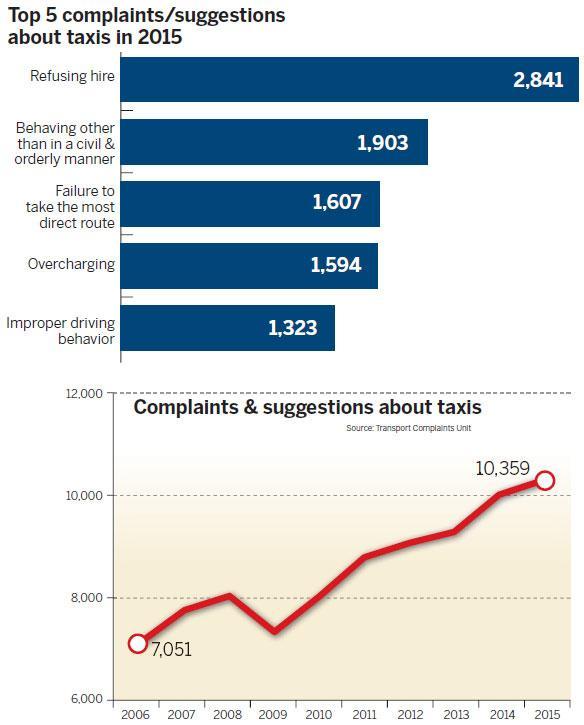 Complaints and suggestions about taxis. (Photo provided to China Daily)

The taxi owners' lobby is against the issuance of more taxi licenses. The license owners' high-yield franchise is threatened. They rallied the hapless drivers into staging demonstrations against the Uber service. They wield clout to influence government legislation and policy.

But the government hesitates to ban Uber outright, as it has expended considerable political capital to promote digital technology and innovation, by establishing an Innovation & Technology Bureau. After a contentious debate and much filibustering, the Legislative Council rushed through a HK$51 million budget for this new Bureau in November 2015.

The Hong Kong government would be delivering a contradictory Luddite message to global technology companies and the evolving "sharing economy" business models of Uber and Airbnb, if it sledgehammers these service innovations. Hong Kong is predominantly a service economy and has to evolve ever faster, exploiting digital technology and mobile networking.

Stung by widespread public criticism, the potential loss of business to new competitors, and energized by the declining trading value of licenses, the taxi owners have formed a self-regulating body - the Taxi Industry Council (TIC), vowing to redress the long-standing discontent of the city's taxi users.

Chairman of the TIC Hung Wing-tat believes that Uber, which may charge more than twice taxi rates by vehicle type and time of day, has "little impact on the trade" with its very distinct, upmarket clientele. The TIC is aimed rather at the government's own scheme, to introduce a premium taxi category of three franchises, with 150 to 200 taxi licenses each.

While the car-hailing Uber service may be technically illegal and caters to an upmarket elite, the Hong Kong government's premium taxi scheme, in the TIC perspective, represents a "clear and present danger" to existing taxi license owners. 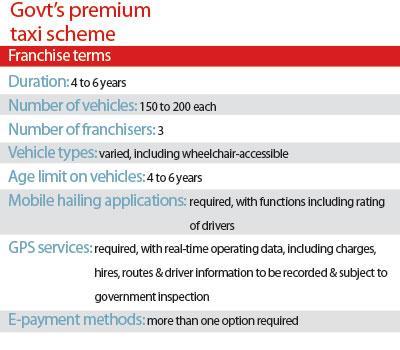 Use existing licenses for premium scheme?

The civil & environmental engineering scholar of the Hong Kong Polytechnic University proposes that the taxis selected for the premium license trial, can revert to their original taxi license status if found unsuitable, after the trial ends.

The government however, clarifies that the two license categories are "fundamentally different" and legally separate. Premium taxi licenses will be time-bound on franchise contracts, non-transferable, and strictly regulated. The licenses cannot be traded. The existing taxi licenses, with a freely tradable market value, are permanent and transferable.

Hung worries that the premium taxi fares, pitched at 60 percent higher than regular taxi levels, may "cap the current taxi fare" and pose strong competition to existing license owners. The TIC's overriding concerns all orbit around the future negative impacts of new government initiatives, on the trading value of existing taxi licenses. 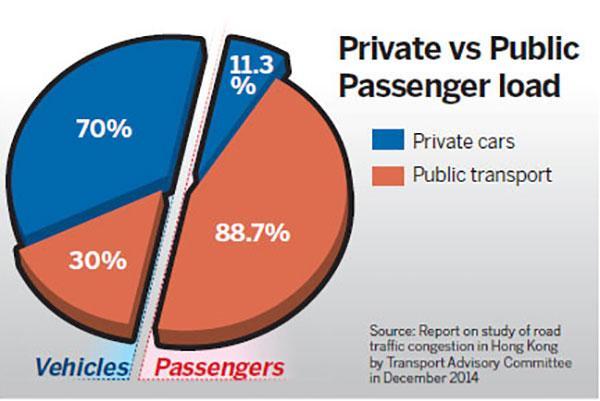 Economist and former director of the Centre for Quality of Life at the Chinese University of Hong Kong Andy Kwan Cheuk-chiu believes that the taxi trade was a flawed system to begin with, which is the root cause of its substandard service. The primary incentive for taxi owners, was the value of the secondary license trade, not operation of the taxi service.

Owner-cartels typically accumulated taxi licenses on the secondary market, and sublet them to agents, to hire drivers and operate. The agents had little interest in the quality of personnel hired. They did not want idle inventory. Anybody with a driving license was enough. They charged a daily rent. Cleanliness, quality of service or comfort of passengers, did not figure in this system.

Kwan says car-hailing services like Uber are a useful innovation, to match idle vehicle capacity with demand. However, given Hong Kong's congested roads and narrow streets, he fears it will bring out more private traffic flow, over-burdening the already strained road system. That is what the government's main consideration in introducing the limited premium taxi concept, predicts Kwan.

Number of registered vehicles from 2003 to 2013. (Photo provided to China Daily)

He believes the premium franchise scheme will entail the proper selection and training of drivers, who will be paid a stable monthly salary. The drivers will have no incentive to refuse fares, overcharge, or take detours to log more miles. Commuter satisfaction would be prioritized.

That leaves car-hailing services only one other choice to grow - partnering with taxis. 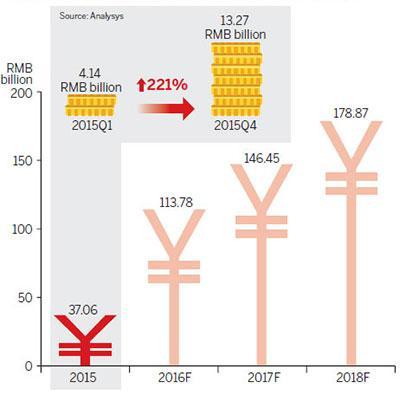 The Chinese government legalized the mobile car-hailing business in the end of July. Uber sold its Uber China arm to its rival DiDi Chuxing, in exchange for 20 percent economic interest in preferred shares and 5.89 percent stake, of the DiDi Chuxing on Aug 1.

DiDi Chuxing will invest $1 billion in Uber. Both companies operated at vast scale in China without profit. The merger hopes to eliminate wasteful competition for market share, and to generate profits. Both CEOs will serve on each other's boards.

Before the Uber China merger, DiDi Chuxing was formed by an earlier merger of two car hailing services on the mainland, DiDi and KuaiDi. DiDi Chuxing is taking the premium taxi path locally, which the Hong Kong government favors. It already has 50 better-equipped taxi partners displaying the DiDi logo and better-trained drivers in uniforms.

The company is engaging about 20,000 taxi drivers in Hong Kong, with more than 10,000 daily trip already, to use its car-hailing app for free. It claims a user base of half a million in Hong Kong, accumulated over two years since August 2014. DiDi's Hong Kong manager, Ng Shu-kei, admits it is a challenge to train mature drivers averaging 56 years, to use its car-hailing application on smartphones.

"Hong Kong is a testing ground for DiDi Chuxing to go international," says Ng. The company aims at improving taxi efficiency in the city, rather than making profits. Apart from its high-profile premium taxi fleet, DiDi worked with the Hong Kong Book Fair at the Convention & Exhibition Centre, mobilizing its fleet to meet the surge of visitors, as a branding exercise.

"We are open to the government's franchised premium taxi scheme. We may team up with other industry stakeholders to submit our bid, or provide our vehicle hailing application for those franchisees," says Ng. DiDi Chuxing is still probing for a business model that works in Hong Kong. 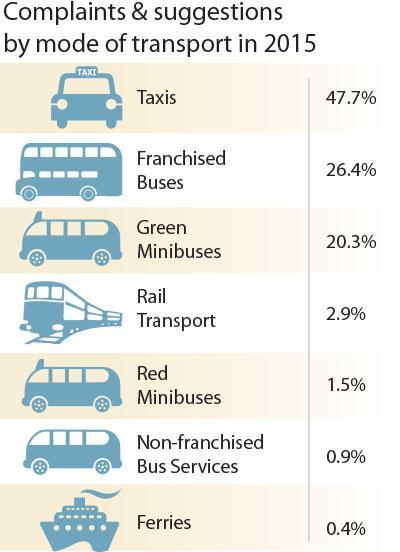 Complaints and suggestions by mode of transport in 2015. (Photo provided to China Daily)

Hong Kong's convoluted banking regulations block an online payment gateway for startups. That is a setback for DiDi Chuxing, whose WeChat e-payment portal is highly popular on the mainland. In Hong Kong, it takes cash payment. "That is extremely inconvenient," says Ng. "We are working on a solution to introduce Octopus or credit card payment options."

Ng felt that without an e-payment relationship, it is harder to retain an active user base. The company is exploring, with the Hong Kong government, ways to extend its service to car-pooling and ride-sharing, which can allow taxi drivers or private cars, to improve utilization by serving multiple commuters taking the same routes. 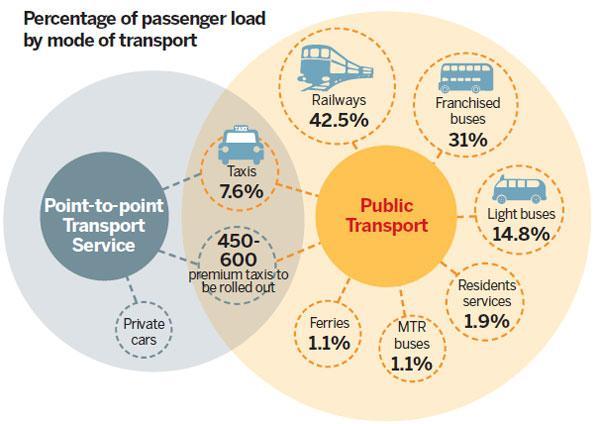 Percentage of passenger load by mode of transport. (Photo provided to China Daily)

Currently, the city has more than 90 premium taxis with upscale features like Wi-Fi, mobile phone chargers and spacious compartments. The leading premium cab service provider, SynCab, with a fleet of 74 such vehicles, is reported to be operating at a deficit.

Unlike most major cities, Hong Kong is very compact. Taxi commutes during business hours are short in distance and duration. Users want to get on with business meetings, shopping or other errands. They are less concerned about luxury and have little time to kill. The need for fancy in-taxi services is absent. Users hop onto the first available cab, or call for one to avoid a queue.

Perhaps as car-hailing and pooling services apps become ubiquitous, an inclusive hybrid system can tap under-utilized assets such as hotel fleets and drivers, to serve visiting and local business users and upscale tourists - without overloading traffic. It will be win-win for fleet owners, commuters and the fragile road transport system. 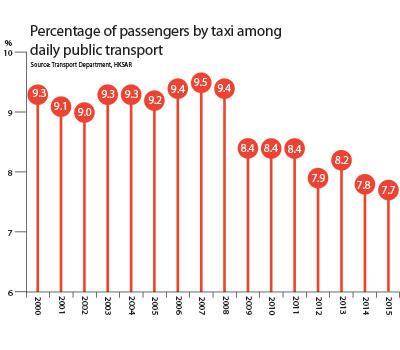