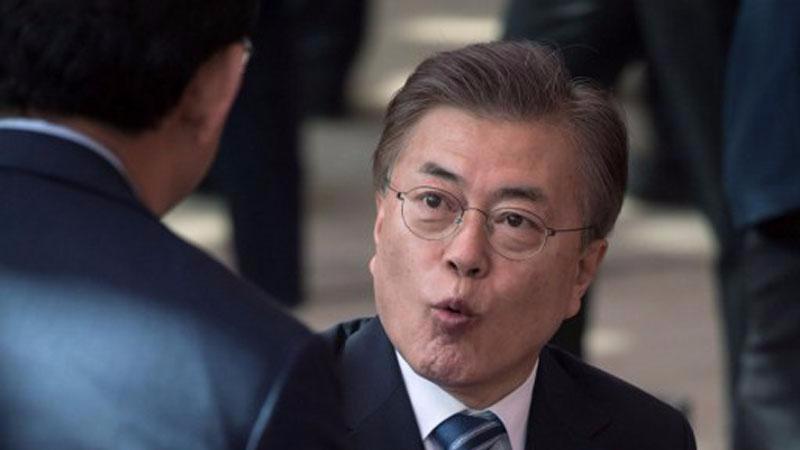 The Republic of Korea's presidential candidate Moon Jae-In attends a prayer session marking Buddha's birthday at the Jogye temple in Seoul on May 3, 2017. South Koreans go to the polls on May 9 to choose a successor to disgraced president Park Geun-hye. (Ed Jones / AFP)

SEOUL - Jason Lim, a 36-year-old South Korean engineer living in Washington DC, thinks it's important to try and maintain a solid alliance with the United States, but not at any cost.

Lim and many other South Koreans say their country has been reduced to pawns in a superpower game of chess as the United States and China seek to tackle the Democratic People's Republic of Korea (DPRK)'s advancing nuclear and missile programs.

That frustration - and a growing desire that politicians put "Korea first"- could drive a near-record number of people to the polls in the May 9 election to find a successor for former president Park Geun-hye, ousted in March over corruption charges.

A higher turnout, especially among those in their 20s to 40s who have been indifferent to politics, is seen boosting liberal candidate Moon Jae-in, who wrote in a book published in January ROK should learn to say "no to America".

Unless there's a major upset, Moon, who advocates a moderate approach on DPRK and criticizes conservatives and their hardline policy for failing to stop its weapons development, will become the next president.

A Gallup Korea poll published on Wednesday shows him with 38 percent support in the field of 13 candidates, with centrist Ahn Cheol-soo his nearest challenger at 20 percent.

"Sometimes I feel our government is bending over backwards trying not to upset the alliance with the United States," said Lim, who is among some 222,000 people who cast their ballots during the April 25-30 voting period for overseas residents.

"I want our president to be someone who isn't afraid to say what's best for Korea."

Lim, who did not vote in the 2012 presidential election, blamed the indifference of younger voters for Park's election victory five years ago that led to the current political turmoil.

Park was impeached in December on accusations she colluded with a friend to collect bribes from big conglomerates. The Constitutional Court upheld the parliamentary motion, making her ROK's first democratically elected president to be forced out of office.

Park went on trial on criminal charges of corruption on Tuesday and could face more than 10 years in prison if convicted of receiving bribes.

Last week, in the middle of the night, the US military installed the Terminal High-Altitude Area Defense system (THAAD), prompting criticism it was trying to deploy theanti-missile battery before the election.

Park's government agreed to it last year to protect against a DPRK's missile. Seoul was to provide the land, while the US military would pay for and operate it.

Liberals criticized Park for not seeking parliamentary approval. Moon says the next administration should make a final decision on THAAD, and until then, deployment should be suspended.

China says THAAD's powerful radar could be used to spy into its territory. While Beijing hasn’t acknowledged retaliating against ROK, it has blocked some Korean products into the country, discouraged Chinese tourists to ROK and shut down several Lotte stores in China. The Korean company handed over a golf course in Seongju, in southeastern ROK, as the THAAD home.

"It is not a new phenomenon ... that ROK is sandwiched by DPRK and the US. And if you look at (THAAD), it is also not a new thing about us being squeezed between the US and China," said Chae Karam, a 31-year-old student at the Harvard Kennedy School in Cambridge, Massachusetts, who voted for the first time in last week's overseas balloting.

Moon, whose campaign promises include "National Interest First" policy, has struck a chord with younger Koreans who want the country to stand up to powerful allies and neighbors.

In addition to putting the THAAD deployment up forparliamentary approval after the election, Moon has promised to renegotiate the unpopular deal Park’s government reached with Japan in 2015 on “comfort women,” the Korean women forced into sexual slavery by Japan during World War Two.

But even some of Moon's supporters are sceptical about Seoul's diplomatic heft.

"It's just a fact. ROK is just stuck in the middle in terms of security issues, and options are limited for Seoul,"said Choi Jung-hee, a 35-year-old housewife in Bundang, south of Seoul.

Tuesday's vote may see the highest turnout for a presidential election in three decades. Nearly 83 percent of 1,500 respondents surveyed by the Elections Commission said they will definitely vote.

The biggest increase in willingness to vote came from the age group of 19 to 29 years old, with 92 percent of those respondents saying they firmly planned to vote, according to Gallup Korea.

Many were mobilized during the massive but peaceful weekend rallies over the last few months of 2016 demanding Park stepdown.

"It was those who held candles that removed Park from presidency," said Kang Dong-wan, a political science professorat Dong-A University in Busan said. "I sense a stronger urge totake part in the election among young people, to make suresomething like that doesn’t happen again."

Kim Byung-pil, a taxi driver in Seoul in his 60s, said he will vote for Hong Joon-pyo, an outspoken former prosecutor and conservative who is pushing a harder line on Pyongyang.

"We need a strong figure. Look at Trump! He doesn't care what others say," Kim said. "We need someone who will be able to push through tough bills and protect us from DPRK."