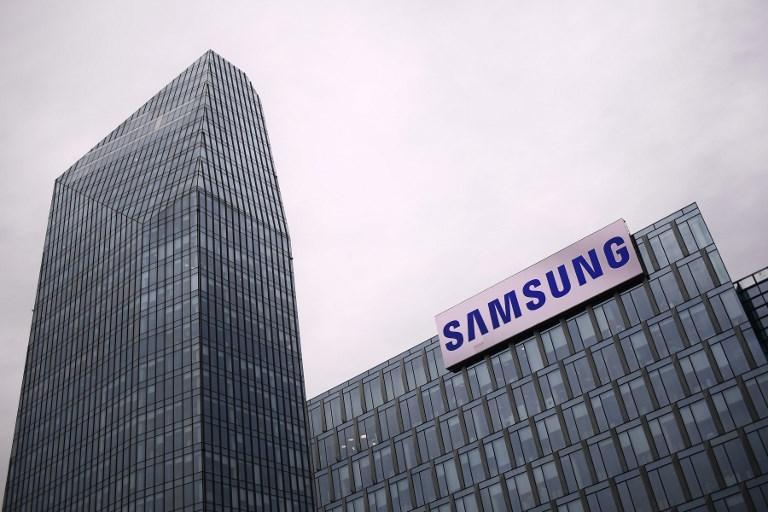 The Samsung logo is displayed on the facade of the Samsung headquarters in Milan on Nov 7, 2017. (MARCO BERTORELLO / AFP)

A tumultuous year for Samsung Group and other conglomerates threatens to get worse as South Korea’s competition authority, the Korea Fair Trade Commission, probes whether their founding families use the cloak of charity to maintain power without having to pay billions of dollars in taxes.

When the new conglomerates bureau of the commission starts operating in December, its first order of business will be auditing the family foundations of the country’s biggest conglomerates, or chaebol. “If foundations are found to be abusing the purpose of their establishment, we will consider ways to regulate them,” says Kim Sang-jo, the commission chairman.

Foundations created by Korea’s corporate giants hold about 12.9 trillion won (US$11.5 billion), according to national tax service data analyzed by Bloomberg. Questions have long swirled around the groups and their donations. Lawmakers say the organizations have allowed the wealthy and powerful families behind Samsung Group, Hyundai Motor Group, Lotte Group, and others to further enrich themselves while not doing enough for the public interest. Critics, including Kim, allege the families use the tax-exempt entities to accumulate shares in their own companies and secure multigenerational control without paying inheritance taxes.

“We will look into what kind of assets they have, how much revenue they raise, and how much they are actually spending for public activities,” says Kim, a former economics professor and

activist shareholder nicknamed the “chaebol sniper” for his work targeting powerful companies. The businesses helped rebuild the nation in the decades after the Korean War but bred a culture of corruption in the process. Today the top 10 chaebol own more than 27 percent of all business assets in South Korea.

Kim is President Moon Jae-in’s point man for reform. He was appointed chair of the Fair Trade Commission in May soon after Moon’s election and has committed to making good on the president’s anticorruption promises. In early November, Kim met in Seoul with leaders from five conglomerates-Samsung, Hyundai, SK Group, LG Group, and Lotte-warning that his agency would soon start auditing the foundations, as well as the businesses. He promised to scrutinize those that have received tax benefits and crack down on activities that go against the foundations’ stated missions.

“They’re demonstrating that they really have the power to make life miserable for those guys,” Scott Seaman, director for Asia at the Eurasia Group in Washington, says of the government crackdown. “The charities are probably an excellent place to look for impropriety.”

Last year, South Korea’s 40 biggest corporate-backed foundations gave a combined 641 billion won, or 4.9 percent, of their 12.9 trillion won to art museums, hospitals, schools, and programs that help North Korean defectors. That’s not enough support for charitable causes, says Park Yong-jin, a National Assembly member from Moon’s party. While not officially part of the conglomerates, the charitable groups are often run by family members or company executives, making them reliable allies against challenges from minority shareholders. The assets of most foundations consist largely of shares with voting rights in chaebol-affiliated companies.

“Companies donate shares with voting rights to charitable foundations as a way to protect their management rights without paying taxes,” says Bruce Lee, chief executive officer of Zebra Investment Management in Seoul. Park, the lawmaker, has proposed legislation to strip the foundations of their voting rights.

Nonprofit foundations have figured in recent political scandals that led to a conviction in August of Jay Y. Lee, co-vice chairman of Samsung Electronics Co, and the impeachment of former South Korea President Park Geun-hye in March. The ex-president had been charged with pressuring chaebol leaders to donate billions of won to foundations run by a confidante and friend in return for government favors. Samsung took part in the scheme, according to prosecutors, to win government approval of the 2015 merger of two affiliates. When regulators forced Samsung to sell shares of one of its units, a foundation chaired by Lee purchased the shares, keeping them under family control.

Samsung has three foundations that had about 3 trillion won combined last year, according to tax office data. Their philanthropic contributions totaled about US$48.1 billion won, or 1.6 percent of assets. By comparison, the largest US foundation, the Bill & Melinda Gates Foundation, made gifts totaling US$4.6 billion, or 11 percent, of its endowment last year. Samsung’s foundations didn’t respond to requests for comment. The chaebols’ charitable entities “are ‘public’ foundations in name only,” says Chung Sun-sup, CEO of corporate analysis firm Chaebul.com.