Eastern will count on the speed of Jaimes McKee during counter-attacks. (Photo courtesy of HKFA.com)

The indisputable highlight of Eastern’s first Asian Champions League campaign is just a few moments away. On Tuesday night, the reigning Hong Kong champions will take on Chinese Super League giants Guangzhou Evergrande in their last ACL home game. For months, the match has been sold out and Mong Kok Stadium will be once again at capacity, with around 6,500 people expected to fill up both home and away stands.

On paper the game appears to be slightly more important for Guangzhou than for Eastern. The latter are without any realistic chance to advance to the round of 16, whereas three points for Evergrande would see them most likely progressing to the final round. Besides, with the Hong Kong Premier League coming to an end, Chan Yuen-ting might already prioritize domestic silverware over unlikely ACL glory. On 30 Apr, Eastern will take on South China in the FA Cup semi-final and just one week later the Blues will face Kitchee in the last Premier League round. The winner of this “season final” will also bag the championship, which would confirm a possible ACL participation in 2018.

Hence, it is yet to see how seriously Eastern will take their remaining Champions League appearances. At the same time, with nothing to lose, the club can approach these games with less pressure. Nevertheless, with almost everyone at her disposal, Chan Yuen-ting will stick to her defensive strategy. Aside from captain Yapp Hung-fai in goal, the starting line-up will most likely feature Roberto Affonso and Josh Mitchell as centre-backs, supported by Wong Tsz-ho and Tsang Kam-to on either side. The midfield could consist of Bai He, Diego Eli, and Ju Yingzhi, who will be flanked by Lee Hong-lim and Jaimes McKee as wingers. In the front, Manuel Bleda is expected to take on the role as a centre-for 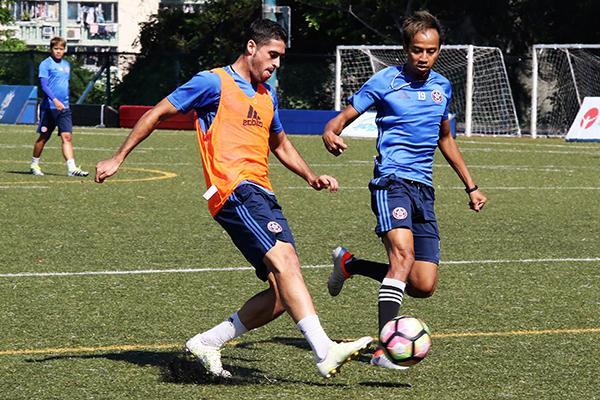 Manuel Bleda scored Eastern's first and only goal so far in the ACL. (Photo courtesy of HKFA.com)

So far, this 4-5-1 formation has worked relatively well at home, and Eastern also know how to use the smaller confines of the Mong Kok pitch to their advantage. So even if a victory for Guangzhou is likely, the Blues have good chances to frustrate their opponents for a while and avoid a repeat of the painful 7-0 disaster away at Tianhe Stadium.

The recent performances of Evergrande in the Chinese Super League might also offer some hope for the Hong Kong side. After six rounds, Guangzhou are third in the table. A few weeks ago, they had to settle with a 2-2 draw against their city rivals R&F, and they have already picked up their first defeat when losing to Shandong early in the season. However, they are still not short of champion qualities, turning around their latest home game against Liaoning in the last twenty minutes with goals from Gao Lin and Goulart. With four goals to his name, the latter is now joint-third top-scorer of the CSL. However, Eastern will be well-advised to not just focus on the foreign threat, which includes the Brazilians Paulinho and Alan. Guangzhou Evergrande can also rely on some of China’s best domestic players, including captain Zheng Zhi, Huang Bowen, and Zhang Linpeng.

The game between Eastern and Guangzhou will kick off on Tuesday, 25 Apr, at 8 pm. For all ticketholders, an early arrival is recommended as there will be ID and security checks at the entrance. After this match, Eastern have only one game left in their first ACL campaign. On 9 May they will play away to Kawasaki Frontale in the south of Tokyo.