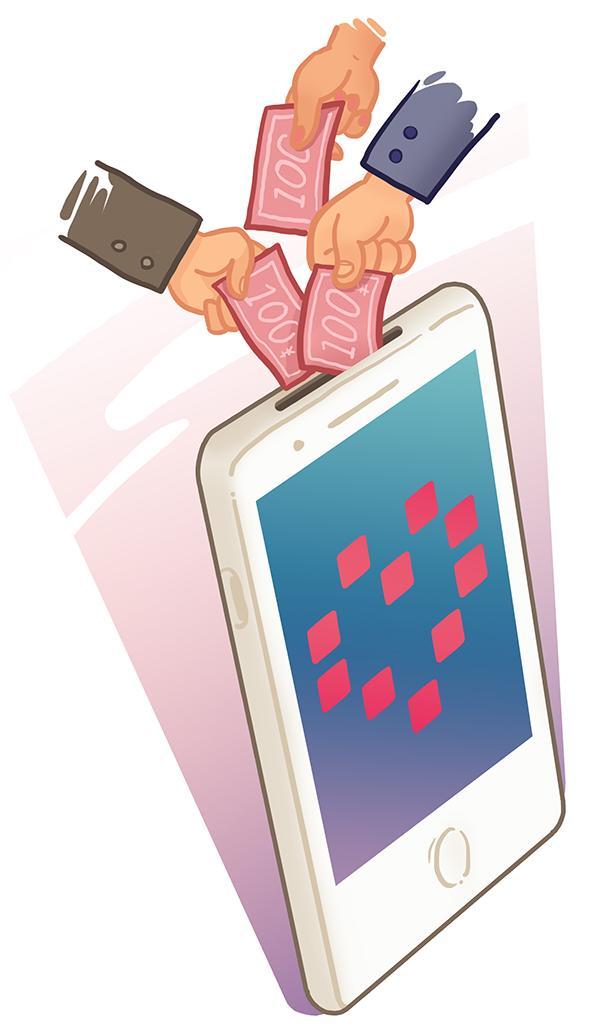 Charity not only begins at home, it is also thriving on the internet.

The big two online companies, Alibaba and Tencent, have come up with an array of web events to help a variety of good causes.

Last year, donations to charities topped 82 billion yuan (US$12.49 billion), a tenfold jump compared with a decade ago, the Ministry of Civil Affairs reported.

"In the era of big data, China's charitable causes are likely to leapfrog and rival the level of developed nations," said Wang Ming, head of the Institute for Philanthropy at Tsinghua University in Beijing.

"It will no longer be confined to a certain group of public benefit organizations as it will become a common practice for everybody," Wang added.

Tencent, which is known for its iconic messaging app WeChat, has helped pioneer high-profile fundraising by mobilizing its 1 billion active users for an annual online charity day gala on Sept 9.

In the lead-up, an art sale for special needs people went viral on WeChat's Moments feature.

The enormous wealth accumulated by the country’s internet-made super-rich ... has laid the foundation for current and future charitable acts

Paintings by young artists suffering from autism, cerebral palsy and Down syndrome were sold in a virtual gallery. Brief biographies of the artists were also included.

To buy a high-resolution photograph of a painting, users simply had to click on the picture to authorize a 1 yuan payment before sharing the image with friends and contacts through their Moments feature.

A QR Code attached to each image even encouraged micro-donations of under 1 yuan.

In the end, it was a stunning success. Just after the sale started, Tencent reported it had reached its target of 15 million yuan.

But then this was just the curtain raiser for the internet gaming giant's annual charity day with 12.68 million users donating 830 million yuan to "good causes", according to the company.

"It was an impressive (piece of) motivation," said Wang Zhiyun, secretary-general of the Shanghai United Foundation, a charitable organization.

"But when philanthropy becomes routine for people in China, we will encounter less 'campaign-like' days and more daily participation," Wang added.

The Tencent Charity Foundation, an in-house philanthropy fund for the smartphone era, has been at the forefront of social conscience issues.

Even the number of "steps walked" recorded on a mobile can translate into a charitable contribution. Reading out stories for the blind is also a popular cause.

Still, the driving force behind this push to raise money for charities has been Pony Ma, chairman of Tencent.

Last year, he announced the company would donate 2 percent of its annual profit, which in 2016 was 570 million yuan, to social issues.

"And technologies create demands for transparency and robust organization governance, which in turn reinforces people's trust in such charitable causes initiated by internet firms," Wang added.

This has put charity programs back in the headlines for all the right reasons after a series of scandals in the past. 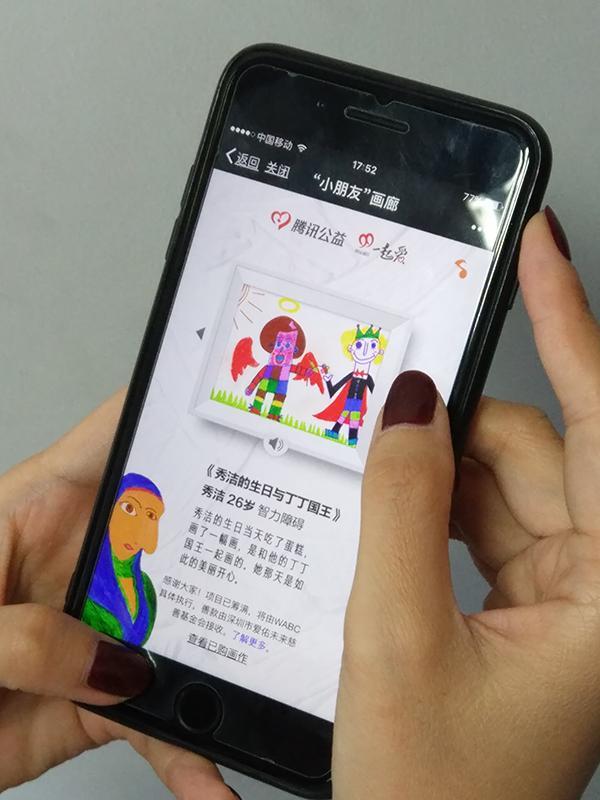 Images from a charitable virtual gallery are displayed on a smartphone screen. (PHOTO PROVIDED TO CHINA DAILY)

Charitable initiatives have since increased with technology titans, such as Pony Ma and Alibaba's founder Jack Ma and Vice-Chairman Joe Tsai, taking the lead.

Jack Ma and Tsai have already pledged share options worth about US$3 billion to various good causes.

"The enormous wealth accumulated by the country's internet-made super-rich during the past decades has laid the foundation for current and future charitable acts," said Fu Changbo, assistant director of the China Global Philanthropy Institute in Shenzhen.

At the root of this social conscience revolution is online technology and the adoption of blockchain in the fundraising process.

Transparency is crucial, with blockchain technology showing donors and charities where and when the funds are being used.

"Any user of the system can see exactly who owns what at any given time, and who has given what to whom," said Li Chao, a fintech, or financial technology, expert at iResearch, a market research and consulting company.

"The net result is that the need for third parties is effectively removed, and so transaction costs can be dramatically cut," Li added.

In simple terms, this new method of payment is nothing more than a digital ledger in which transactions are chronologically recorded and tracked.

To illustrate this, donors using Alipay can click on the "donation record" button to show the amount and the time it was recorded.

The Say Goodbye to Aplastic Anemia organization was an early convert to blockchain.

In partnership with the Chinese Red Cross Foundation, the charity has been raising funds to help children suffering from aplastic anemia.

This is a rare disease in which the bone marrow and the hematopoietic stem cells are damaged.

"We are proud to be a part of this blockchain-based charity project, and we are happy to be involved in this technological revolution," said Hu Ling, director of crowdfunding at the Chinese Red Cross Foundation.

Innovation might be the life blood of the internet, but it is also filtering through fundraising activities.

Ant Forest, another Alibaba initiative, is a radical departure from the traditional charity format and has been recognized for its environmental impact.

The platform tracks the "carbon footprint" of individual users as they collect "energy points" through their actions in the real world.

This in turn is used to grow virtual and, ultimately, real trees.

Up to 230 million users of Alipay have activated Ant Forest accounts, according to the company. Ant Financial and its partners, including nongovernmental organizations, the SEE Foundation and the China Green Foundation, have planted 10.25 million trees, or the equivalent of a 1.22-million metric ton reduction in carbon dioxide emissions.

"By integrating a fun game into the Alipay app, we have provided our users with the opportunity to play a meaningful role in the fight against climate change," Lucy Peng, executive chairwomen at Ant Financial told Xinhua News Agency.

"We believe our platform can power positive change well beyond the financial sector and there is much more we can do in the future," she added.

Wang Haipeng is an avid supporter of the initiative.

"It was not that I did not care about charity before, it was just too inaccessible," Wang, who lives in Shanghai, said. "Now, it has become an intrinsic part of my life. . . it has changed my lifestyle."

Naturally, this new approach to highlighting important social issues, such as climate change, is considered an exciting development as it gets the younger generation involved.

Many see innovative ideas like this as vital to the future of fundraising for charities.

"The exciting thing about the Ant Forest program is that it makes carbon relevant (and gives it an) online identity," said Simon Zadek, co-director of the United Nations Environment Programme's Inquiry into the Design of a Sustainable Financial System, an international organization, which works with Ant Financial on green digital finance.

"It is a whole new way of thinking about carbon markets, and is incredibly relevant for young people and generations going forward," he added.