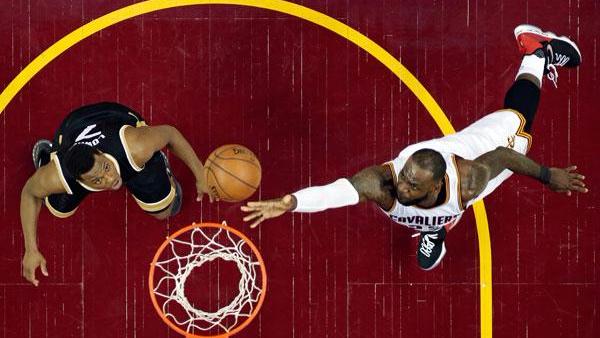 Cleveland Cavaliers' LeBron James, right, drives to the basket against Toronto Raptors' Kyle Lowry during the first half in Game 2 of a second-round NBA basketball playoff series, May 3, 2017, in Cleveland. (AP Photo/Tony Dejak)

CLEVELAND — LeBron James scored 39 points, hopped Kareem Abdul-Jabbar on the career playoff scoring list and pushed the Cleveland Cavaliers to a 125-103 blowout over the Toronto Raptors in Game 2 of their Eastern Conference semifinal series on Wednesday night.

Just like a year ago in the conference finals, the Cavs are up 2-0 on the Raptors, who had better figure some things out or this series will be over quickly. Toronto was blown out for the fifth straight time in Cleveland in the playoffs, losing each by an average of 24.2 points.

Game 3 is Friday night at Toronto's Air Canada Centre, where the Raptors will have the crowd on their side.

However, they won't have James, who has won a road game in 27 consecutive series and appears determined to toss Toronto aside. He finished 10 of 14 from the field.

Kyrie Irving had 22 points and 11 assists and Channing Frye scored 18 points for the reigning champions, who are 6-0 so far defending their title. Cleveland is 9-0 since losing Game 4 of last year's NBA Finals.

Toronto only got five points from All-Star DeMar DeRozan, who didn't make his first field goal until the first minute of the fourth quarter. Of bigger concern might be the status of guard Kyle Lowry, who sprained his left ankle in the third quarter. Lowry spent the fourth quarter in the locker room icing his ankle. 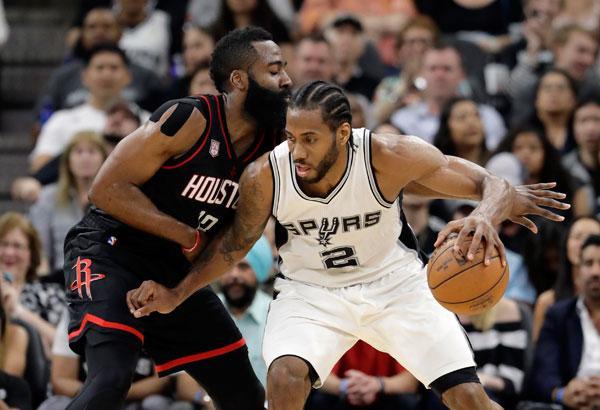 San Antonio Spurs forward Kawhi Leonard (2) works for an opportunity to the basket as Houston Rockets' James Harden, left, defends during the first half of Game 2 in a second-round NBA basketball playoff series, May 3, 2017, in San Antonio. (AP Photo/Eric Gay)

SAN ANTONIO — Kawhi Leonard had 34 points, eight assists and seven rebounds, and San Antonio overcame the loss of Tony Parker to beat Houston and even the Western Conference semifinals at one game apiece.

Parker did not return after hurting his left leg with 8:43 remaining in the game. Spurs officials said Parker will undergo an MRI on Thursday morning and update his status after, but Spurs coach Gregg Popovich said following that game that "it's not good."

Parker fell to the court after missing an uncontested short jumper. He grabbed his left knee immediately upon landing and remained on the court for a few minutes. He attempted to walk, but had to be carried by teammates to the back. Spurs owner Julianna Hawn Holt rose from her courtside seat to point and scream at an official after Parker exited the game.

Parker finished with 18 points and four assists in 26 minutes.

Houston point guard James Harden was limited to 13 points on 3-for-17 shooting.