Chitralekha Basu takes a close look at the new, cutting-edge exhibition spaces, located far away from the concrete jungle of downtown HK, that come with a promise to change the way art is viewed in the city. 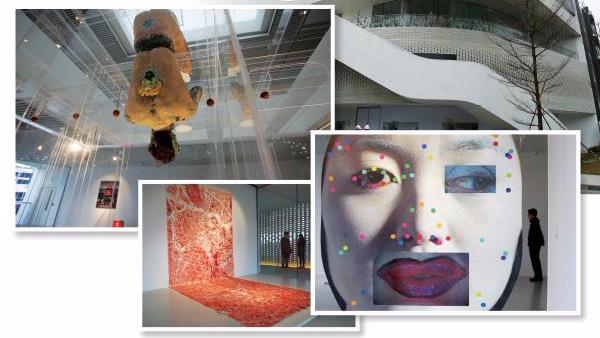 When Pascal de Sarthe was looking to open his first art gallery in Hong Kong, industry insiders had told him to stick to Central if he expected to get any business. De Sarthe was a veteran of the art trade, having run galleries in Paris, Los Angeles, San Francisco and Scottsdale. He couldn’t quite see why it was de rigueur to set up shop within 2 square kilometers of downtown Hong Kong. After all, people in New York did not necessarily go to Manhattan looking for contemporary art!

Besides, the spaces available to rent in Central and Sheung Wan came with low ceilings and narrow corridors. The rents were prohibitive. The very idea of trying to showcase art in downtown Hong Kong seemed to defy all possible logic. Still, de Sarthe bowed to peer pressure and opened the eponymous De Sarthe Gallery in Ice House Street, off Queen’s Road.

Less than seven years later, de Sarthe has moved to the south side of Hong Kong Island, to a 10,000 square feet space on the 25th floor of Global Trade Square in Wong Chuk Hang. Looking out on the vivid green hills and slivers of the sea showing up between high-rises through the gallery’s floor-to-ceiling glass panes, de Sarthe says he doesn’t have an iota of regret moving away from the so-called center of the city’s art hub.

“Where I was before was in fact an anomaly for Hong Kong’s art world,” he says. “Central is all about big label fashion stores and luxury items. It has nothing that lends itself to the cultivation of art and culture. Where I am now is in fact the mainstream art district.”

There are at least 20 art galleries in Hong Kong’s Southern District — tucked away inside refurbished workshop floors of erstwhile industrial buildings in Ap Lei Chau, Aberdeen and Wong Chuk Hang. They may not be visible to potential visitors strolling by on a leisurely weekend afternoon, but the audience turnout is steadily rising, thanks to the open studio days and guided tours periodically hosted by the likes of Hong Kong Art Gallery Association. 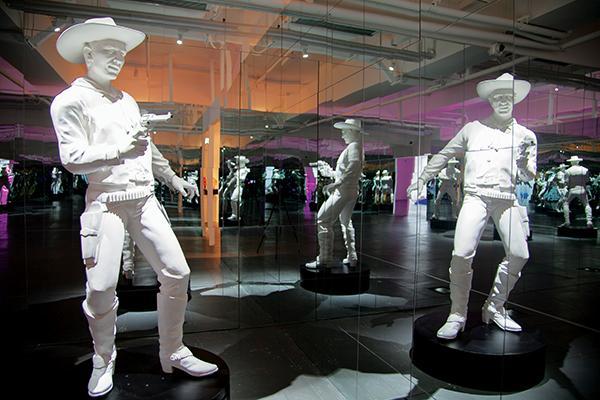 Nestled by the green hills

The movement away from Hong Kong’s preeminent art hub around Pedder Street, Ice House Street and Hollywood Road is not just spatial. It also marks an attitudinal shift on the part of the art-goer. Gallerists seem to have found a new confidence in the current crop of art-lovers to risk opening avant-garde exhibition spaces, often in far-flung destinations like the New Territories or the Repulse Bay Beach. Carmen Ho, who manages the K11 Art Foundation, of which the newly-opened chi art space in Clear Water Bay is a part, however, is confident that through a solid and meaningful programming they would be able to inspire both the novice and the initiated to participate in their events.

The space in question looks a bit of an idyll, cradled by the misted, cloud-kissed hills. The two-tiered building is all fluid lines with no sharp corners or boxed up spaces. Staircases spiral up the outer wall right up to the terrace which comes with an adjustable sun roof. There is a sense of continuity and unhindered flow, whichever direction the viewer might like to take as he explores the premises.

Janet Fong, who curated chi art space’s launch exhibition, Second Nature, which opened in March, says the show grew directly out of the near-epiphany she experienced the moment she first saw the building and was astonished by its architectural ingenuity.

“I was struck by the landscape,” says Fong. “On one side you have a linear landscape with the rows of buildings (New World’s upcoming residential development project), on the other there are the hills. They made me think of the dichotomy between nature and that which is man-made. And again nature could be both about the natural world as well as about the character of a thing or a human being, the elemental aspect.”

A life-size model of a seated human being turned upside down in a multi-faceted, multi-paneled glass-case was the centerpiece in Second Nature. The massive installation, by David Altmejd, would take on a different hue, with each passing hour, as the sunrays pierced and were refracted through the glass at different angles. “That’s an installation which won’t work as well anywhere else,” says Fong. “Seeing it on a bright and sunny day would be a completely different experience from doing so on a cloudy one. Everything about the sculpture — plexiglass, polystyrene, polyurethane foam, quartz, epoxy clay, epoxy gel, acrylic and metal wire — will respond to the changed environment.”

The extraordinarily abundant light and lush natural surroundings of chi art space will soon be shared with children from underprivileged backgrounds, many of whom are used to living in narrow, constricted spaces in subdivided apartments, reveals Ho. “We hope to partner with institutions working toward the welfare of underprivileged kids in this city and let them use this space for art workshops and other activities,” she says. “It’s only rarely kids from such families would get to enjoy creating something in a 5,400 square feet space.” 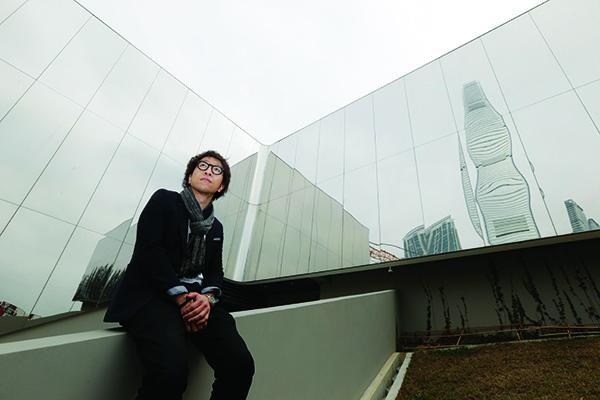 M+ Pavilion, the pilot exhibition space of West Kowloon Cultural District, opened last September. While it may not be as far out of downtown Hong Kong as chi art space, the approach roads to the pavilion might seem a tad circumlocutory, surrounded as it is by various under-construction projects at the moment. The present inconveniences in accessing the spot will soon be sorted out when the M+ Museum of Visual Culture is completed and all the structures in the 40-hectare compound are linked by an integrated walkway. Then the temporary roadblocks, literally speaking, have not deterred the city’s art-goers from visiting the venue.

Then M+ Pavilion is worth a visit on its own merit, irrespective of the art it is showing. It could be mistaken for a futuristic spaceship, air-dropped by aliens on the rolling green park on the tip of Kowloon peninsula. Its mirror-paneled exterior walls reflect and distort the panoramic vista dotted by Hong Kong’s iconic buildings along the Victoria Harbour. A solitary Bauhinia plant growing on the berm, surrounded by a circular step ramp, seems to rise defiantly, parallel to Hong Kong’s tallest building, the mighty International Commercial Centre.

The structure has a refreshing energy and playfulness about it, not too different from the vibe extended by its young architect Vincent Pang. The mirror finish, says Pang, was meant to “enhance the idea of floating and flux”. “In certain parts of the surface you do see a clear and accurate reflection, while in certain others you do not. The distortions are meant to challenge the idea of an absolute,” he remarks. “When the same thing is reflected in different ways, depending on the angle and perspective you’re viewing it from, this could add a fresh layer of thinking to one’s existing thoughts.”

Evidently, the venue was designed with a view to provoking people to think even before they have entered its premises. Pang says he hopes to have struck a balance between functionality and aesthetic appeal. The space is highly maneuverable, he adds. The 400-square-meter exhibition space on the second floor could be easily doubled by folding up a collapsible glass panel, thus placing the art objects against the expansive natural landscape. “The place lends itself to projections, live performances, different kinds of digital shows, light effects. Our platform is very flexible and multi-functional,” says Pang. 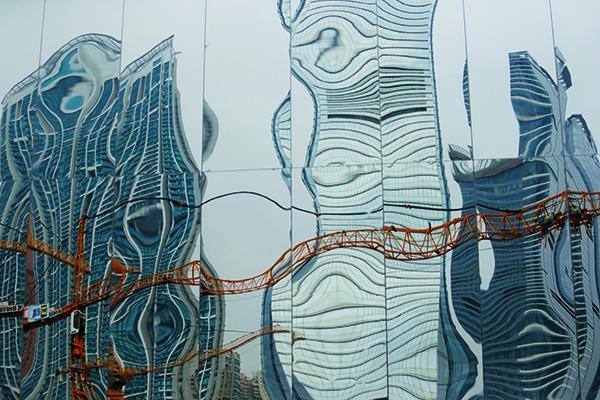 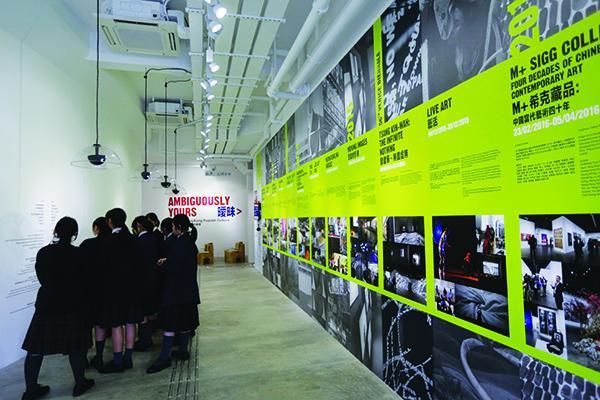 Lee Ho-yin, head of architectural conservation programs at Hong Kong University, feels the emergence of these spacious, cutting-edge exhibition spaces that could be worth checking out for their own artistic merit signify a willingness to experiment. “Looking at both M+ Pavilion and chi art space it is apparent that architects and curators have abandoned the old approach and begun looking at architecture and art as a complete package in which the artwork presented is of a similar high standard as the architecture containing it,” says Lee.

It’s a welcome development, he contends, for even at the risk of “stealing the show” from the artworks they display, these strikingly spectacular art facilities help “blur the boundary between the art content and the art container, and become a functional landmark that may draw tourists and bring in revenue for the city”. A widening of the audience base for art, even when achieved through the agency of commerce, is worth the effort, he adds. “My opinion is that art should not become a priority in itself, as this places art in an elitist bracket that serves connoisseurs and neglects the community at large.”

Both M+ Pavilion and chi art space are proximate to commercial projects. While the former, Lee points out, “is part of the local government’s attempt to boost tourism and the property market, aimed at general development of the area around West Kowloon Cultural District”, the latter is located a stone’s throw away from an up-and-coming high-end residential complex. The possibility of building a mutually-beneficial symbiotic relationship between art and commercial interests seems to be part of the agenda.

What remains to be seen, says Pauline Foessel, director of Hong Kong Contemporary Art Foundation, is whether “M+ Pavilion and chi art space would work as magnets for other art entities to come and settle next to them”.

She seems in agreement with de Sarthe’s contention that it’s absurd to expect an art hub to grow and flourish in downtown Hong Kong. “I think, in any city, the main role of an art hub is to develop a place and a community. Therefore I am a fervent supporter of art spaces not in the city center. Then finding a very interesting place that challenges artists and inspires the viewers is not an easy thing to achieve and it has a price,” says Foessel.

Indeed, it takes a commitment to invest time and effort to step out of Central to go see art in locations that seem to be in the back of beyond. Are Hong Kong’s art-goers ready to walk the extra mile to support the city’s changing artscape?