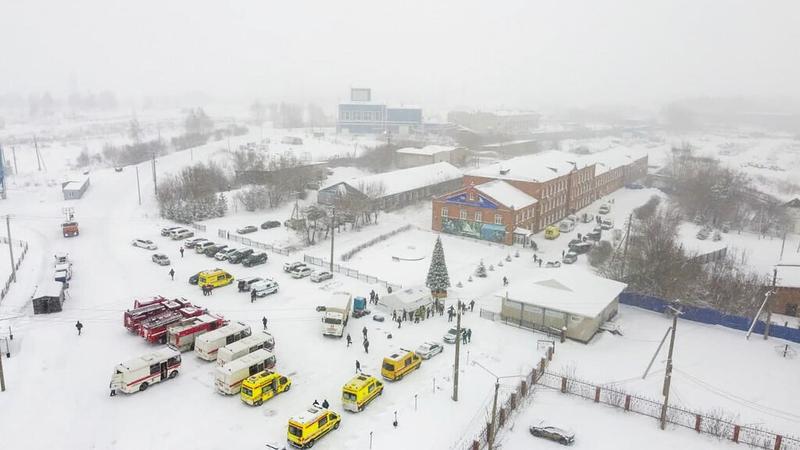 Ambulances and fire trucks are parked near the Listvyazhnaya coal mine out of the Siberian city of Kemerovo, about 3,000 km east of Moscow, Russia, Nov 25, 2021. (GOVERNOR OF KEMEROVO REGION PRESS OFFICE PHOTO VIA AP)

MOSCOW - A Russian rescue worker presumed dead after descending into a Siberian mine to assist trapped miners was found alive on Friday in what the authorities called a miracle after one of Russia's most deadly mining accidents since the Soviet era.

At least 51 people were killed in what authorities said was probably a methane explosion and in the subsequent rescue effort on Thursday at the Listvyazhnaya mine in the coal-producing region of Kemerovo.

Let me share some happy news. One rescuer, Alexander Zakovryashin, was found. He's our medic. He was saving people. It's some kind of miracle.

Six rescue workers sent down to bring out dozens trapped underground were among the dead, the authorities had announced.

But on Friday morning, Acting Emergencies Minister Alexander Chupriyan said one of the six rescuers had been found alive and was being treated in hospital.

"Let me share some happy news," Chupriyan said in footage broadcast by state media. "One rescuer, Alexander Zakovryashin, was found. He's our medic. He was saving people. It's some kind of miracle."

Zakovryashin, 51, was conscious when he was found and managed to surface and call for help, the RIA news agency reported. He is now in intensive care at a local hospital where he is being treated for hypothermia, dehydration, and poisoning, among other conditions, the TASS news agency reported.

Zakovryashin and the five who died in the rescue effort will be given state awards, Chupriyan said.

Investigators say miners suffocated when a ventilation shaft became filled with gas, while state television reported prosecutors believed there had been a methane explosion.