Courage is the real beauty 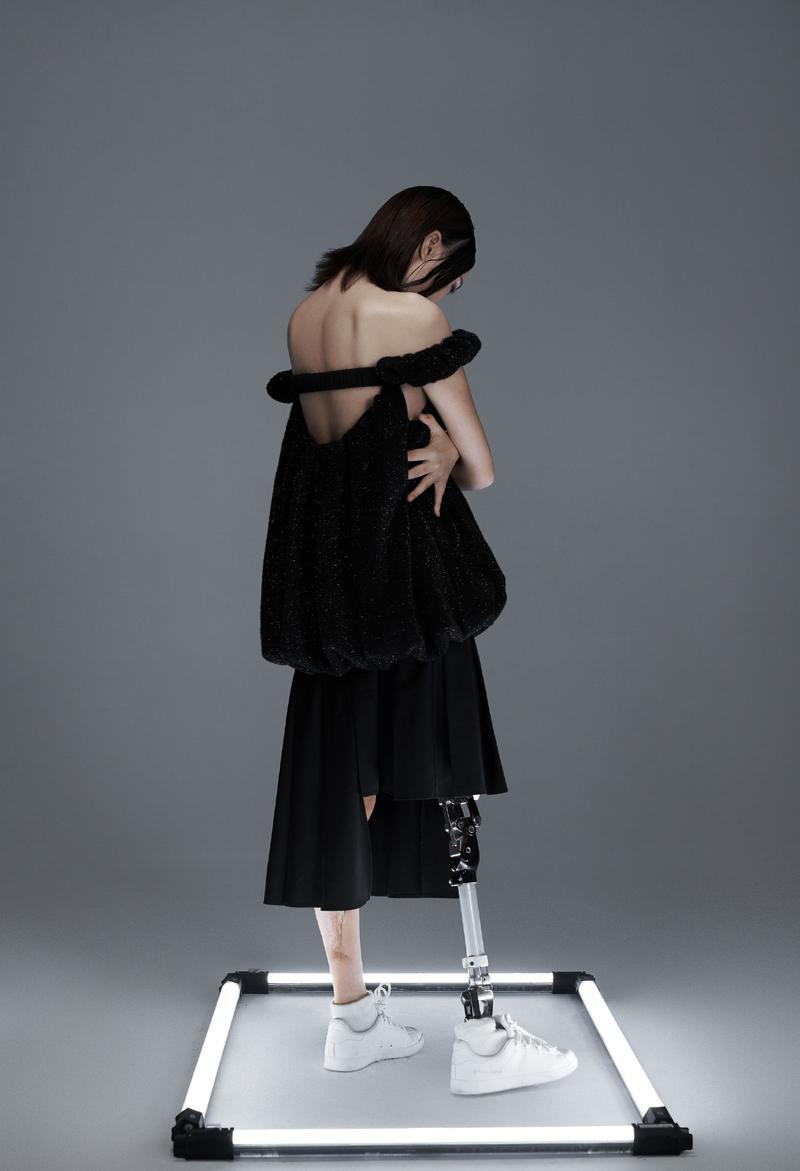 Now 24, it has taken Niu over a decade to finally accept her body image, and has since become a fashion icon and an online influencer.  (PHOTO PROVIDED TO CHINA DAILY)

She looked stunning on the catwalk. This was not just because of her beauty or the clothes she was wearing. She also seemed to radiate an inner strength. She is not even a professional model, but her one-minute catwalk went viral on micro-blogging platform Sina Weibo, racking up more than 160 million views as of Tuesday.

When Niu Yu strutted confidently down the catwalk at the recently concluded Shanghai Fashion Week, she did it with her artificial leg in full view, and in that single action she combined beauty with courage.

"It is a really big breakthrough for me to stand on a stage," Niu confesses in an exclusive interview with China Daily.

"Losing a leg doesn't mean losing my passion for life," she says, adding that everyone has their own beauty.

The 24-year-old is a photographer in Chengdu, Southwest China's Sichuan province, who, at the age of 11, lost her right leg, which was amputated just above the knee, in the 2008 Wenchuan earthquake. It took her over 10 years to accept her new body image. It seems that society needs longer.

Having faced prejudice against the physically challenged, as well as negative and hurtful comments, Niu found her own way to challenge outdated stereotypes. 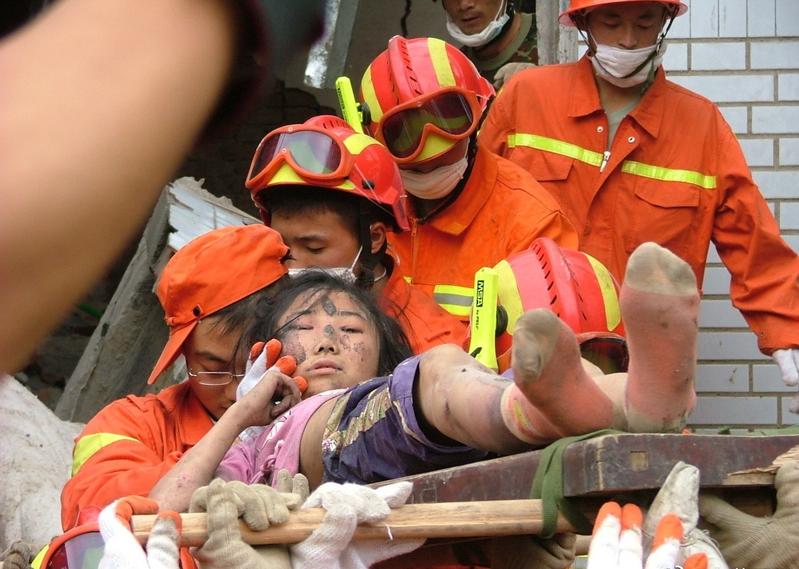 Eleven-year-old Niu Yu getting rescued after being buried in the ruins of her school in Sichuan province for three days following the Wenchuan earthquake in 2008. (PHOTO PROVIDED TO CHINA DAILY)

Her latest video, also taking the internet by storm, shows her walking along Chunxi Road, Chengdu's busiest commercial street, last month, with her "iron leg" lit up with LEDs. The shining prosthetic limb made it impossible for passersby not to stare.

"My prosthesis is a badge of survival and courage; of my fight for life in hospital," she says. "It is a part of me and not something to be hidden."

Actually, she says that she wants to tell all the physically impaired, who are stuck at home, to walk out on the street and enjoy the sunshine.

China has more than 85 million people with various disabilities, including nearly 25 million who are physically challenged like Niu, according to the sixth national census released in 2010.This translated into more than 6 percent of the population at the time living with some form of disability.

But this group is rarely seen in day-to-day life. Niu is an exception. And she wants the group to be seen and, with her as an example, to rally more people to join in the effort to eliminate the stigma against people with disabilities.

Her optimistic attitude toward life has warmed the hearts of social media users. Her account on short-video sharing app Douyin, known as TikTok overseas, has attracted nearly 900,000 followers so far.

Many social media users nicknamed her as "Iron Man's sister". Some users commented that, in her, they do not see a physically impaired person, but "a bright, sunny and wholesome girl".

A Sina Weibo user named Lululu Shenme comments under one of Niu's posts: "Many people with dreams can see the rays of hope because of you; more people will see your radiance and feel the light." 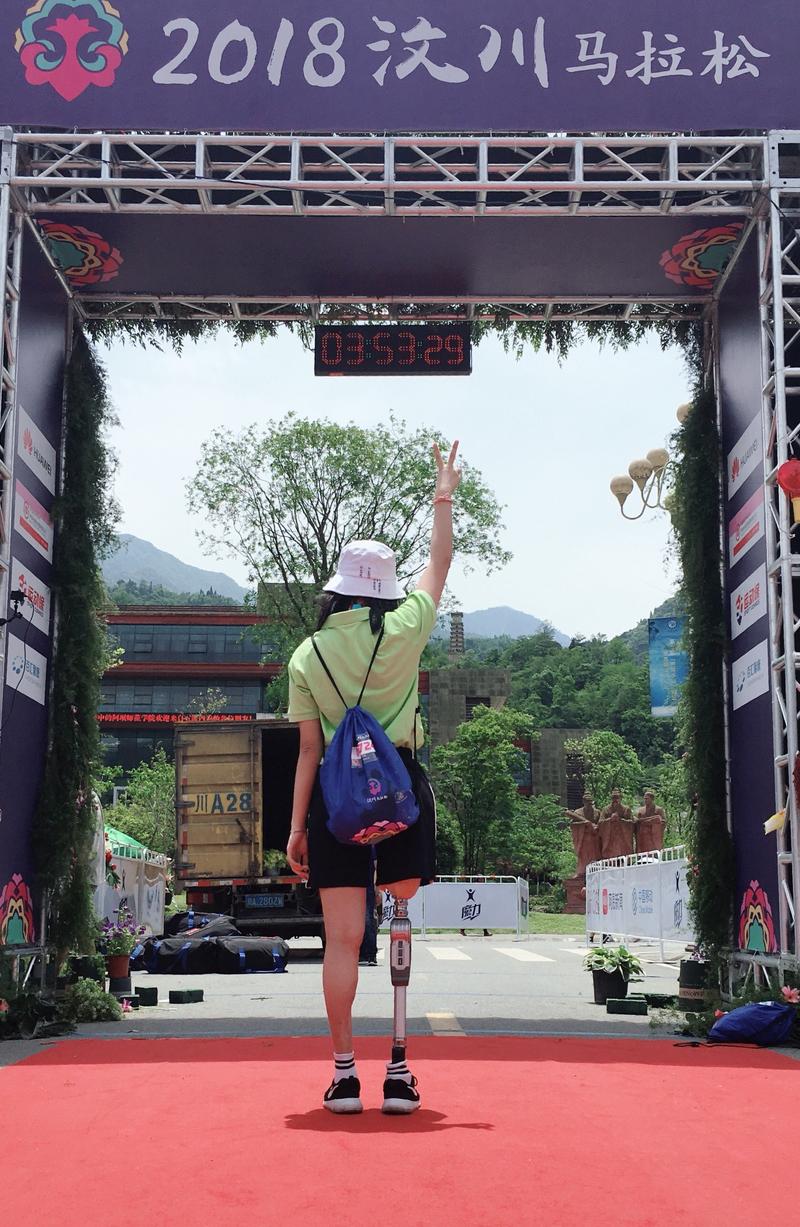 She finishes running the half marathon marking the 10th anniversary of the tragedy. (PHOTO PROVIDED TO CHINA DAILY)

Thirteen years ago, the then teenaged Niu was buried under the ruins of her school in Beichuan Qiang autonomous county for three days following the 8.0-magnitude earthquake that hit Wenchuan in southwestern Sichuan province. The fifth-grader was sitting in an English class when, all of a sudden, the quake flattened her primary school which was situated in one of the hardest-hit areas.

"Many students were buried under the ruins," she recalls of the darkest moment in her life. "We cried and shouted, but people on the ground could not hear us. Vaguely, I could hear my mother shouting my name for hours on end. When her voice faded away at last, it was the deepest desperation I have ever experienced."

She was the last student in her school to be rescued and her right leg was so badly damaged it had to be amputated above the knee. When doctors suggested amputating the other leg, fearing a gangrenous infection, her father begged on his knees for them not to.

Having more than 30 operations to remove the dead, damaged and infected tissue, and staying in hospital for more than three months, her left leg was finally saved.

Following an excruciating rehabilitation process, Niu has learned to stand on one leg and move with the use of a prosthesis.

As well as losing her right leg, she also lost her younger brother and nine friends who grew up with her.\

Niu feels that she is lucky. "At least I survived and I am surrounded by people who love me," Niu says, smiling through eyes welling with tears.

Her trauma caused her to doubt herself. She thought that she would never wear short skirts or tight jeans. She became introverted and refused to take a subway by herself or dine out alone. Every time she went outside, she would tape sponge to her prosthetic leg and wear long trousers to hide her disability, while constantly fearing that her gait would give her away.

The turning point came in 2018, the 10th anniversary of the earthquake, when she registered to run a half marathon, organized by the Wenchuan county government. She decided there and then that enough was enough. It was time to embrace life. Niu wore shorts in the event, showing her prosthetic leg in public.

She finished the 21-kilometer marathon in 3 hours and 53 minutes, at times almost walking. But the time did not matter. It was her way to thank the people who helped Wenchuan recover from the earthquake and tell the world that it was all in the past. The present and the future now demanded her attention.

She recalls the last few moments before reaching the finish line. "When I heard people shouting 'China, jiayou (stay strong); Wenchuan, jiayou', I knew that my strength was back," Niu says. 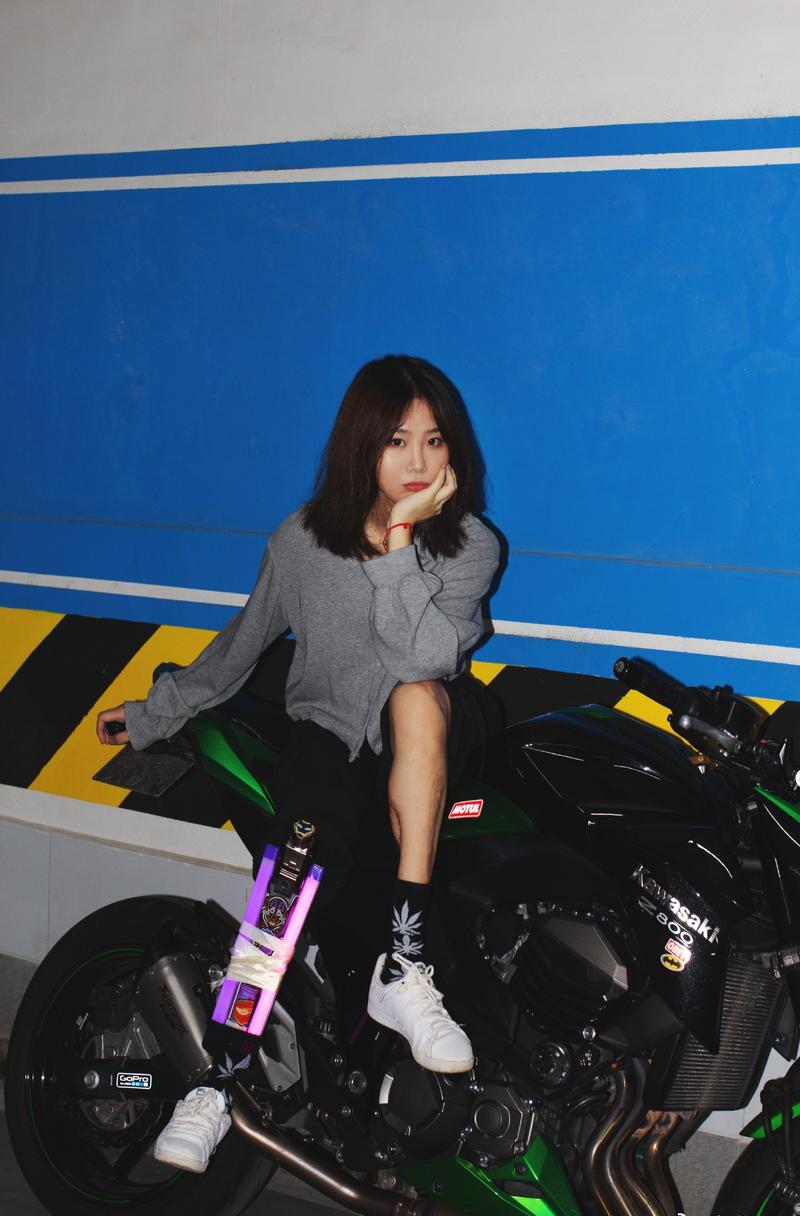 Now 24, it has taken Niu over a decade to finally accept her body image, and has since become a fashion icon and an online influencer.  (PHOTO PROVIDED TO CHINA DAILY)

Since the race, Niu has begun to embrace herself for who she is.

She keeps reminding herself that the journey of life is short and every fleeting moment counts.

She knows that it is not what she is missing that defines her, but what she has got－courage and confidence.

"When children see people like me walking on the street, I hope that, in their eyes, we can be the superheroes－representing power and courage," Niu says.

In 2018, Niu graduated from Tianfu College of the Southwestern University of Finance and Economics in Chengdu with an associate degree in accounting. However, she didn't become an accountant as her parents had hoped, instead choosing a career in photography.

In late 2018, she went to remote Metog county in southeastern Tibet autonomous region for a monthlong volunteer teacher program. And then the moment arrived. Her students surrounded her, curious about her "iron leg". She knew she had made the right choice and it was her turn to help others and pass on the love.

Now she works as a photographer in Chengdu and she got there her way. Some shots require the photographer to squat, a position ruled out by her artificial leg. Instead, she lies on the ground to click the shutter. "Nobody can define you, but yourself," she says.

Although still suffering from phantom limb pain and having to constantly massage the amputated stump of her right leg to decrease inflammation and muscle waste, Niu knows the prosthetic leg is a part of her beauty and uniqueness.

She always remembers what her father told her, "when you accept your flaws, you become free and strong".

Although Niu hasn't figured out yet just how much she has accepted her flaws, she knows that no one is perfect. Everyone has flaws－visible or invisible－that they want to hide away. And she has learned to appreciate her "imperfection".

"Maybe my way provokes some negative reactions, but I don't care," Niu says.

It seems she can't help but be inspirational.